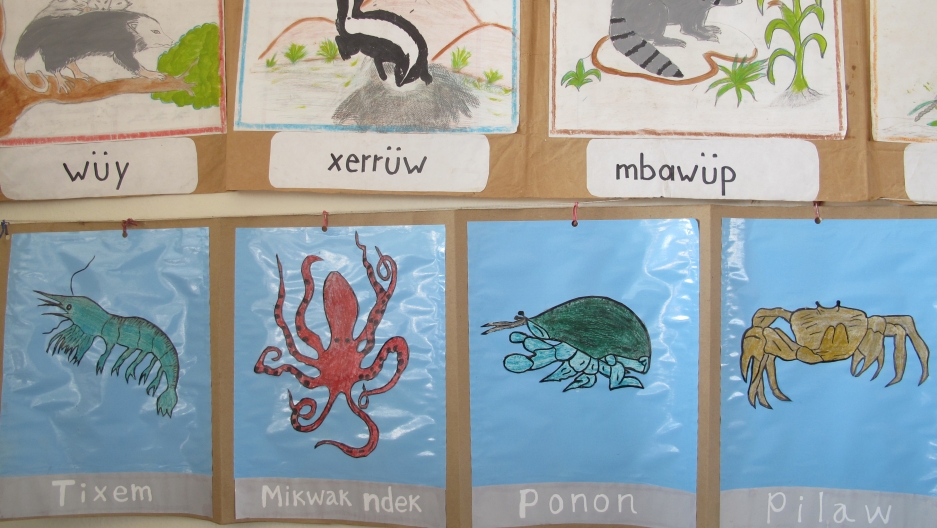 Pictures of local animals on the wall of a bilingual school in the town of San Mateo del Mar have captions in Huave to help children learn the language.

The town of Santa María del Mar, Mexico, hasn’t had electricity for more than three years. At night a generator hums in the town plaza, powering a few pale streetlights.

Santa María, population 800, rests at the end of a skinny peninsula sandwiched between the Pacific Ocean and a shallow lagoon that locals call the Dead Sea. Most days tempestuous winds drawn off the hot plains of Mexico’s Oaxaca state billow across the peninsula out toward the cool Pacific. 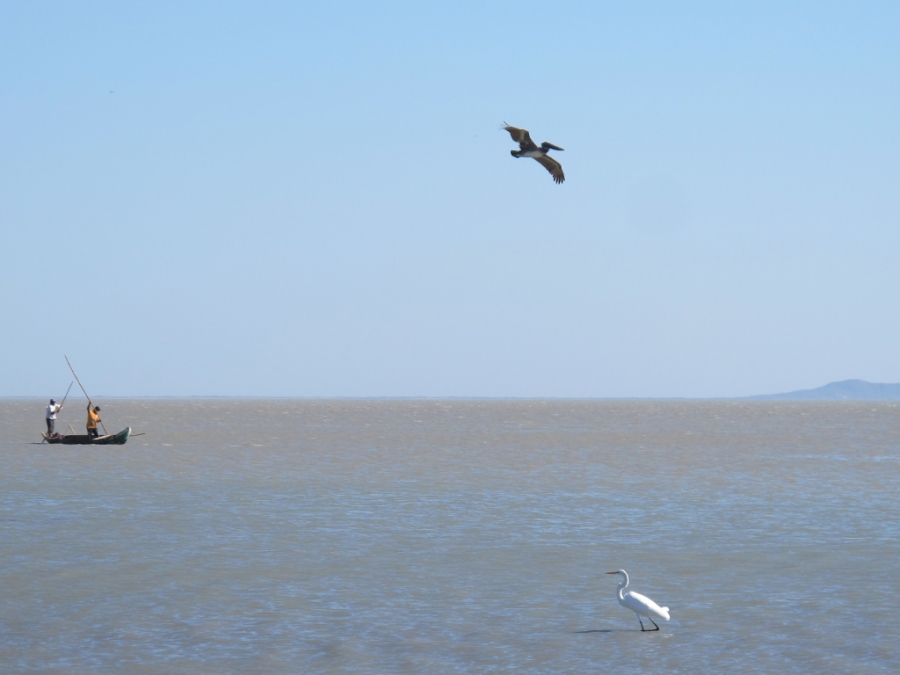 Locals in Huave communities have traditionally fished from small boats in a wide lagoon known locally as the Mar Muerto, or the Dead Sea.

This windswept peninsula is home to the Huave, an indigenous people believed to have come to Mexico centuries ago from Central America or even as far south as Peru. The Huave still speak a language isolate that is unrelated to any other language on Earth. Most of the remaining Huave speakers live in Santa María and a neighboring town, San Mateo del Mar, which is further down the peninsula. These are two of the last remaining towns on Earth that speak Huave, and yet the people in these two towns don’t talk to each other anymore. The reason? The wind.

Nearly 10 years ago, Santa María decided to let a renewable energy company build a wind farm here. But San Mateo opposed the wind farm. Many felt that their neighbors were giving away the Huave’s land. And for the Huave, land is everything — it’s sacred.

San Mateo eventually set up a permanent roadblock to stop construction of the wind farm. Suddenly people up the peninsula in Santa María became cut off from the outside world.

“We’ve been held here against our will, like we’re kidnapped,” said Martincito Ramírez, 80, one of the last Huave speakers in Santa María. 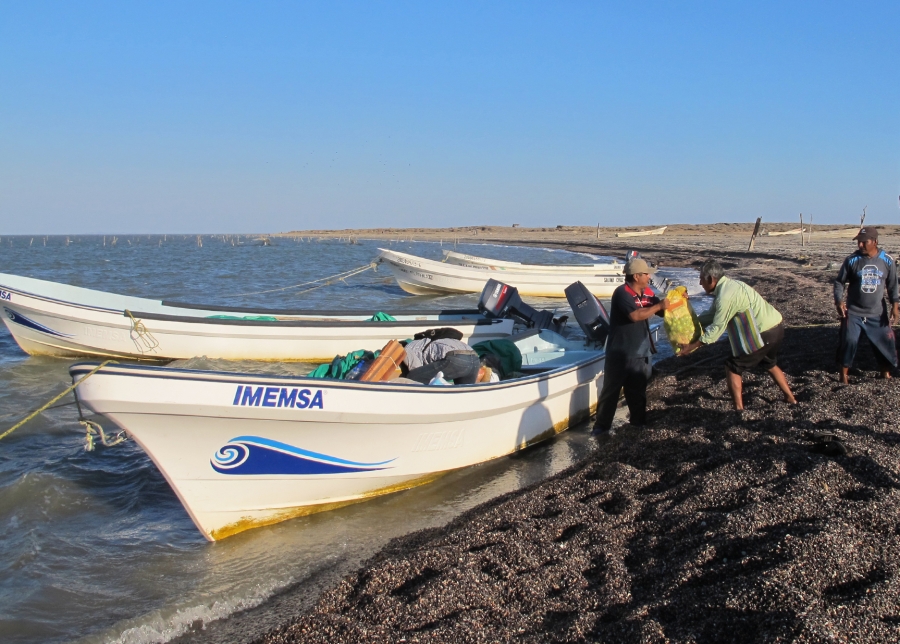 Small boats transport food and other supplies from mainland Oaxaca to the town of Santa María del Mar. Locals here lost access to the only road out of town nearly a decade ago during an ongoing conflict about clean energy.

Ramírez said that people here have traditionally survived by fishing and once sold their catch by traveling out of town on the road. In addition to putting up the roadblock, Ramírez says that locals in San Mateo steal animals from farmers in Santa María.

Related: Why a trailer filled with 23 greyhounds is crossing the US-Mexico border

“We’re fisherman,” Ramírez said, “but our neighbors in San Mateo fish from the earth.”

The stalemate between the two Huave towns has continued for nearly a decade. People in San Mateo eventually cut off Santa María’s electricity and water supply. Locals in Santa María are essentially trapped: No road, no electricity and no wind farm.

With all the fighting, the clean energy project never got off the ground. But locals in the town opposing the wind farm have kept the roadblock up — they worry that the project isn’t canceled, it’s just stalled.

Some of the few people who study Huave believe the clean energy conflict has accelerated the loss of Huave speakers. Huave is far more widely spoken in San Mateo. And residents from both towns used to communicate in the language while participating together in traditional activities like fishing.

“Locals from Santa María were usually more exposed to Huave from people in San Mateo than their own family,” said Samuel Herrera, a linguist at the National Autonomous University of Mexico who studies Huave. 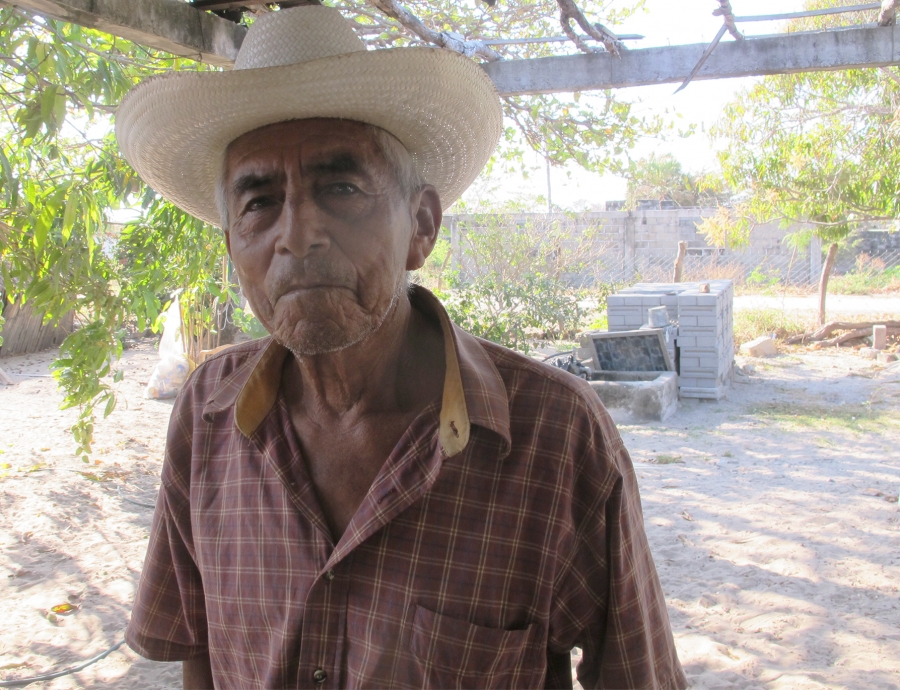 Martincito Ramírez, 80, is one of the last people in the town of Santa María del Mar who can still speak Huave fluently.

Huave is slowly dying all over the Pacific coast of Oaxaca as younger generations increasingly move to the mainland to seek education and jobs.

“People here keep telling me to forget about the language,” said Vladimir Martínez, 26, a teacher from Santa María who teaches Huave.

Martínez lives on the mainland but works with linguists from Mexico and the United States to create a Huave alphabet and a dictionary. As a result of the conflict, Martínez can only reach Santa María by boat. The winds often make it impossible for the ferry to operate. Boats have overturned and locals drowned.

“I try to do my work in Santa María,” Martínez said, “but the wind usually makes it impossible.”

In San Mateo, the town that opposed the wind farm, locals have started a bilingual school to teach children in both Huave and Spanish. Kids sing songs in Huave. And students get scolded for speaking Spanish. But despite these efforts, the language is also disappearing here.

“Fewer children can speak Huave than ever before because they’re more exposed to Spanish through television and the internet,” said Bety Gutiérrez, 49, a teacher in San Mateo. “The language is being displaced.” 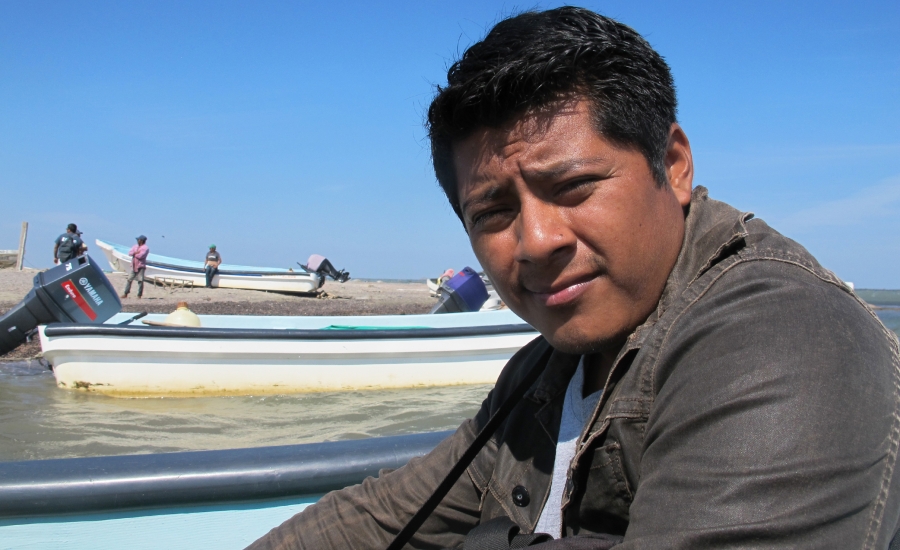 Vladimir Martínez, 26, has tried to document the Huave language in the town of Santa María del Mar, but a conflict among Huave speakers over a proposed clean energy project has complicated his work.

As a resident of San Mateo, Gutiérrez has mixed feelings about the energy conflict. Gutiérrez tried to start a program that would give pregnant women or those in need of urgent medical care permission to pass through the roadblock, but her proposal was shot down. Many people on the peninsula worry locals in Santa María who become ill might not reach doctors in time. But at the same time Gutiérrez doesn’t want the energy companies to build wind farms here, so she also supports some of the drastic measures taken against Santa María.

“A true Huave would never sell their land,” Gutiérrez said.

On the other side of the roadblock in Santa María, Vladimir Martínez continues to work on his Huave dictionary, recording the words of the older generation.

“The language will never disappear,” Martínez said, smiling, “thanks to my dictionary.”

And for the moment, life in this small fishing community will proceed close to the way it always has. The attempt to keep the language alive, in its spoken form, may have almost been lost. But the battle to keep out the wind farm has been won.