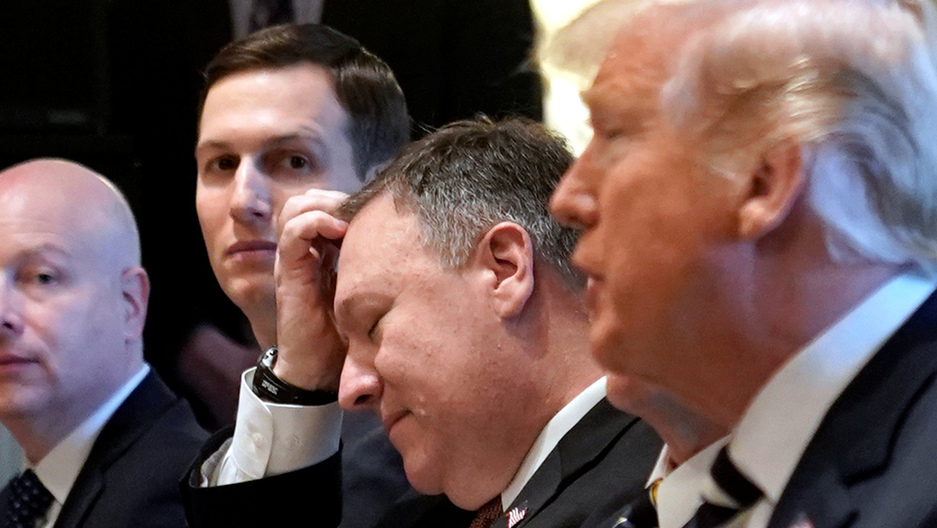 President Donald Trump said on Wednesday that Mike Pompeo, the current CIA director and his nominee to be the new Secretary of State, formed a "good relationship" with North Korean leader Kim Jong-un when they met in secret.

Pompeo became the most senior US official known to have met Kim when he visited Pyongyang to discuss a planned summit with Trump.

"Mike Pompeo met with Kim Jong Un in North Korea last week. Meeting went very smoothly and a good relationship was formed. Details of Summit are being worked out now. Denuclearization will be a great thing for World, but also for North Korea!" Trump said on Twitter.

Mike Pompeo met with Kim Jong Un in North Korea last week. Meeting went very smoothly and a good relationship was formed. Details of Summit are being worked out now. Denuclearization will be a great thing for World, but also for North Korea!

Pompeo's visit and the Tweet provide the strongest sign yet about Trump's willingness to become the first serving US president ever to meet a North Korean leader, amid a protracted standoff over the North's nuclear and missile programs it pursues in defiance of UN Security Council resolutions.

At the same time, old rivals North Korea and South Korea are preparing for their own summit, between Kim and South Korean President Moon Jae-in, on April 27, with a bid to formally end the 1950-53 Korean War a major factor in talks.

"As one of the plans, we are looking at a possibility of shifting the Korean peninsula's armistice to a peace regime," a top South Korean presidential official told reporters in Seoul earlier on Wednesday when asked about the North-South summit.

"But that's not a matter than can be resolved between the two Koreas alone. It requires close consultations with other concerned nations, as well as North Korea," the official said.

South Korea and a US-led UN force are technically still at war with North Korea after the Korean War ended with a truce, not a peace treaty. The US-led United Nations Command, Chinese forces and North Korea signed the 1953 armistice, to which South Korea is not a party.

"I do not know if any joint statement to be reached at the inter-Korean summit would include wording about ending the war, but we certainly hope to be able to include an agreement to end hostile acts between the South and North," the official said.

Trump said on Tuesday he backed efforts between North and South Korea aimed at ending the state of war.

Such discussions between the two Koreas, and between North Korea and the United States, would have been unthinkable at the end of last year, after months of escalating tension, and fear of war, over the North's weapons programs.

But then Kim declared in a New Year's speech his country was "a peace-loving and responsible nuclear power" and called for lower military tension and improved ties with the South.

He also said he was considering sending a delegation to the Winter Olympics in South Korea in February, a visit that began a succession of steps to improve ties.

Pompeo's visit to the North was arranged by South Korean intelligence chief Suh Hoon with his North Korean counterpart, Kim Yong Chol, and was intended to assess whether Kim was prepared to hold serious talks, a US official said.

Pompeo flew from a US Air Force base in Osan, south of Seoul, an official with the South's defense ministry said. The South's presidential office declined to comment on the trip.

Speaking in Beijing, Chinese Foreign Ministry spokeswoman Hua Chunying said she had no information about any Xi visit to North Korea.

"What I can stress is that China and North Korea have a tradition of high level mutual visits," she told reporters.

"China is willing to strengthen high-level exchanges with North Korea, deepen strategic communications, expand talks and cooperation, and to bring out the important leading role of high-level contact in China-North Korea relations."

Trump said on Tuesday he believed there was a lot of goodwill in the diplomatic push with North Korea, but added it was possible the summit — first proposed in March and which the president said could take place in late May or early June — may not happen, in which case the United States and its allies would maintain pressure on North Korea through sanctions.

Nevertheless, Pompeo's conversations in North Korea had fueled Trump's belief that productive negotiations were possible, according to a US senior official briefed on the trip.

The two Koreas have meanwhile been pressing ahead with preparations for the inter-Korean summit next week.

South Korea's presidential office said they had agreed to broadcast live, for the first time, parts of the summit, including the hand shake between the two leaders.

Additional reporting by Soyoung Kim and Joyce Lee in Seoul, John Walcott and Steve Holland in Washington, and Christian Shepherd in Beijing; Editing by Robert Birsel and Nick Macfie.