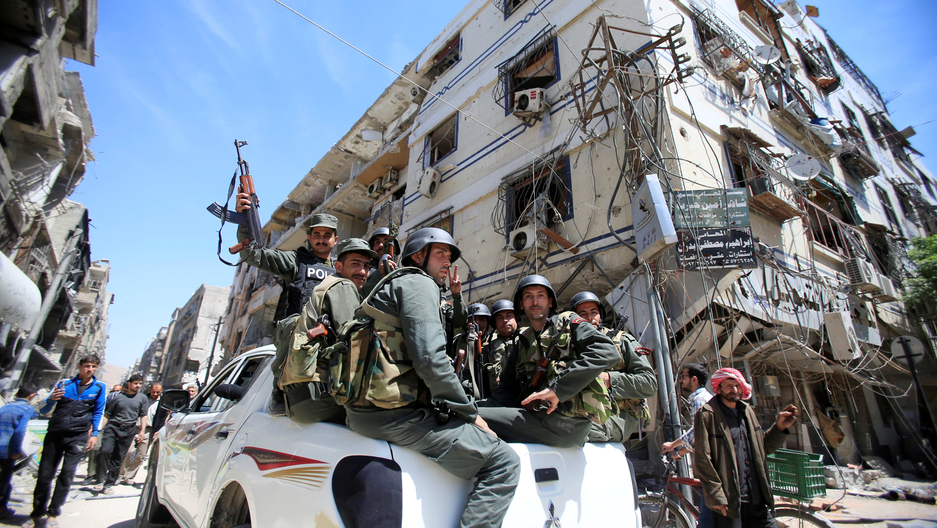 Members of the Syrian police hold their weapons as they sit on a back of a truck at the city of Doma, Damascus, Syria April 16, 2018.

Moscow is denying charges from the US that Russians or Syrians may have tampered with evidence on the ground of a suspected poison gas attack in the city of Duma.

And, after additional accusations that the Organization for the Prohibition of Chemical Weapons (OPCW) was being block from access to the suspected site, Russia said Tuesday that inspectors will be given access on Wednesday, according to the BBC.

Russia blamed delays on the retaliatory US-led missile strikes on Syria on Saturday.

British Prime Minister Theresa May and French President Emmanuel Macron faced criticism from political opponents over their decisions to take part in the air strikes.

Syria and Russia deny unleashing poison gas on April 7 during their offensive on Duma, which ended with the recapture of the town that had been the last rebel stronghold near the capital, Damascus.

Relief organizations say dozens of men, women and children were killed. Footage of young victims foaming at the mouth and weeping in agony has thrust Syria's civil war — in which half a million people have been killed in the past seven years — to the forefront of world concern again.

OPCW inspectors traveled to Syria last week to inspect the site, but haven't been able to access Duma,  which is now under government control after the rebels withdrew.

"It is our understanding the Russians may have visited the attack site," US Ambassador Kenneth Ward said at an OPCW meeting in The Hague on Monday.

"It is our concern that they may have tampered with it with the intent of thwarting the efforts of the OPCW Fact-Finding Mission to conduct an effective investigation," he said. His comments at the closed-door meeting were obtained by Reuters.

Russian Foreign Minister Sergei Lavrov denied Moscow had interfered with any evidence. "I can guarantee that Russia has not tampered with the site," he told the BBC.

Increasing regional jitters, Syrian anti-aircraft defenses shot down missiles fired at the air base of Shayrat in Homs province late on Monday and at another base northeast of the capital, Damascus, Syrian state television and pro-Iranian Hezbollah media said.

The Pentagon said there was no US military activity in that area "at this time."

An Israeli military spokesman said: "We don't comment on such reports."

The UN Security Council is due to be briefed on Tuesday, at the request of Russia, on the situation in Syria's northern city of Raqqa, where ISIS was defeated last year by US-backed forces, and the Rubkan camp for displaced Syrians near the country's border with Jordan and Iraq.

Two days after the missile strikes that he hailed as a well-executed military operation, President Donald Trump still wants to bring the small number of US troops in northern Syria home, the White House said.

But spokeswoman Sarah Sanders said he had not set a timeline for a pullout. Trump was also willing to meet Russian President Vladimir Putin, she added, while indicating that no such encounter was imminent.

Britain's delegation to the OPCW accused Russia and the Assad government of stopping inspectors from reaching Duma.

"Unfettered access is essential," it said in a statement. "Russia and Syria must cooperate."

The team aims to collect samples, interview witnesses and document evidence to determine whether banned toxic munitions were used, although it is not permitted to assign blame for the attack.

The inspectors met Syrian Deputy Foreign Minister Faisal Mekdad in the presence of Russian officers and a senior Syrian security official in Damascus for about three hours on Sunday.

OPCW inspectors have been attacked on two previous missions to the sites of chemical weapons attacks in Syria.

Syrian flags flew in Duma on Monday, security forces stood on street corners and Russian military police patrolled the streets. State aid trucks handed out bread, rice and pasta to people who had lived under siege for years.

A government-organized media tour did not include the building where, according to rescue workers and medics who were in town at the time, dozens of people were killed by poison gas.

Doctors at the hospital where suspected victims were treated told reporters on the tour that none of the patients that night had suffered chemical weapons injuries — they were asphyxiated by dust and smoke in a bombardment.

Medical aid groups and the White Helmets rescue organization have said such statements — already aired on state television in recent days — were made under duress.

'Right thing to do'

The US-led strikes did nothing to alter the strategic balance or dent Assad's supremacy, and the Western allies have said the aim was to prevent the further use of chemical weapons, not to intervene in the civil war or topple Assad.

At a meeting in Luxembourg, the 28 EU foreign ministers endorsed the missile strikes and considered steps to deepen Assad's isolation.

Britain's May told parliament the decision to conduct air strikes against Syria was in the British national interest and not as a result of pressure from Trump.

"We have not done this because President Trump asked us to, we have done it because we believed it was the right thing to do, and we are not alone. There is broad-based international support for the action we have taken," May said.

May has said she did not seek a green light from parliament for the attacks, citing the need to act quickly.

By Laila Bassam and Anthony Deutsch/Reuters