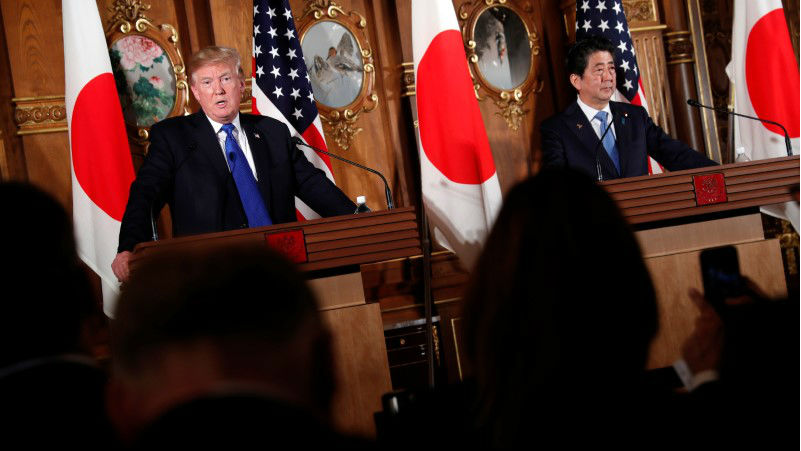 US President Donald Trump and Japanese Prime Minister Shinzo Abe will seek common ground on how to deal with North Korea's nuclear challenge on Tuesday amid fears in Tokyo that Trump might be prone to make too many concessions.

Abe is due to arrive at Trump's Mar-a-Lago retreat in Palm Beach, Florida, for two days of talks dominated by North Korea but also expected to cover trade, relations with China and other issues.

Both leaders could use a successful summit to give themselves a political boost at home. Trump has been hounded by controversies linked to an investigation into Russian meddling into the 2016 election, and Abe is struggling with declining popularity because of scandals over suspected cronyism.

Trump has forged close ties with Abe during his 15 months in power and the two have bonded over rounds of golf both during Abe's last visit to Florida more than a year ago and Trump's visit to Tokyo last November.

Tokyo fears the US leader will try to link vital security matters with touchy trade topics.

Trump said on Twitter on Tuesday he looked forward to the meeting with Abe: "Working on Trade and Military Security."

Trump's agreement to hold a summit with North Korean leader Kim Jong Un, a session expected in late May or early June at a place yet to be determined, has also raised some concerns among Japanese officials.

Abe told Japan's parliament last week he would ask Trump to seek elimination of all North Korean missiles that could reach Japan. Only getting rid of intercontinental ballistic missiles "has no meaning for Japan," Kyodo news agency quoted him as saying.

In response, the White House made clear Trump is concerned about the security of US allies in addition to the American people.

"Not allowing North Korea to threaten the US just means that we remain committed to achieving the complete, verifiable, and irreversible denuclearization of the Korean peninsula," a White House official said.

Tokyo is equally eager to avoid being pushed into talks on a two-way free trade agreement aimed not only at market access but at monetary and currency policies.

The two possible options have set the stage for a standoff between the world's largest and third-largest economies on the eve of a summit between the leaders of the two countries.

Treasury Secretary Steve Mnuchin tempered expectations about the United States possibly re-entering the Trans-Pacific Partnership (TPP), something Trump has indicated he would be willing to do if the deal was changed.

"Japan is obviously one of the big participants and we're focused on our trade relationship with them—that's a big part of the TPP right now," Mnuchin said in an interview with CNBC.

White House economic adviser Larry Kudlow told CBS the United States would like Japan to open up some markets, especially in agriculture.