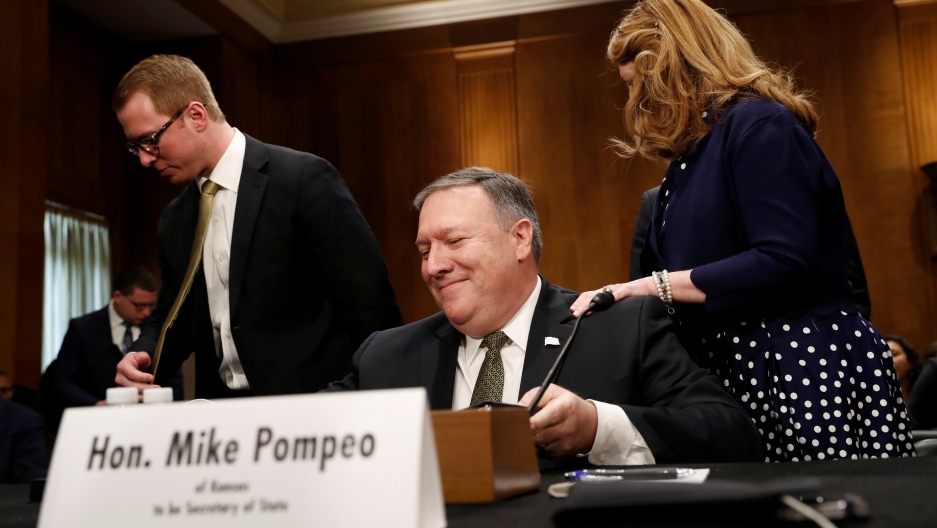 CIA Director Mike Pompeo gets a shoulder squeeze from his wife Susan Pompeo as he sits down to continue testifying before a Senate Foreign Relations Committee confirmation hearing on Pompeo's nomination to be secretary of state on Capitol Hill in Washington, US, April 12, 2018.

Mike Pompeo, President Donald Trump’s nominee for the post of America’s top diplomat, will have a lot on his plate if he’s confirmed as the next Secretary of State.

Dealing with climate change is not likely to be a top priority, and Pompeo’s nomination represents the Trump administration's consolidation of officials whose views on climate clash with those of mainstream scientists.

Related: Can Pompeo get the State Department 'back at the big kids’ table'?

The nomination comes shortly after the departure of two top aides who pushed for the US to remain in the Paris climate change agreement.

Most of those who remain in the Trump administration now either deny that the climate is changing or question how much human actions are to blame.

Former Secretary of State Rex Tillerson was an exception. He accepted that climate change is real and greenhouse gases are to blame, and urged President Trump to remain in the Paris climate accord. (Tillerson also axed the department’s climate change envoy, however.)

Related: 'It's like starting over': What Pompeo means for diplomacy

If Pompeo is confirmed and fills the vacancy left by Tillerson, his views on climate change would likely be more in line with those of President Trump, who once called climate change a “hoax.”

During his congressional career, Pompeo was a top recipient of campaign funding from the oil billionaire Koch brothers. He opposed the Paris agreement, government support of renewable energy development and the regulation of greenhouse gas emissions.

He did seem to moderate this view during his confirmation hearing in front of the Senate Foreign Relations Committee hearing last Thursday, saying “the climate is changing, there’s a warming taking place.”

“I’m happy to concede that there is likely a human component to that,” Pompeo told the committee, though he stopped short of saying that humans were directly, or largely, causing climate change. “I’m equally prepared to tell you that as we find tools that are effective to prevent the risk to the United States … the State Department ought to appropriately be involved in them.”

Senators highlighted during the hearing that as America’s top diplomat, Pompeo would be dealing with national security threats and migration issues that most of the world understands as being exacerbated by climate change.

If confirmed, Pompeo would also oversee the United States’ participation in the UN climate talks.

The US has pledged to pull out of the 2015 Paris climate change agreement — which the rest of the world’s countries have joined in an attempt to limit greenhouse gas emissions — but cannot formally exit the UN agreement until 2020. The US has continued to send delegations to UN climate meetings to represent its interests, and a key meeting in Poland this December will finalize what’s being called the “rulebook” for that agreement.

It’s looking increasingly likely that Pompeo may not have the votes necessary for a confirmation in the Senate Foreign Relations Committee next week. But GOP leaders have told CNN that even if Pompeo fails to get committee approval, they will still call for a vote in the full Senate and believe he could get confirmed.

Related: Trump's new pick for CIA director has a murky past with torture programs