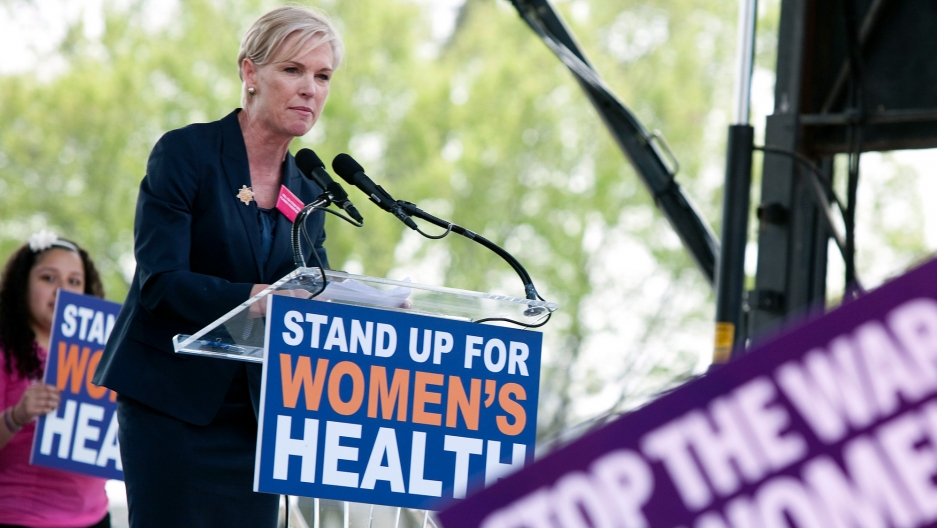 It’s hard to remember a time in which there wasn’t a furious national debate over abortion rights and the future of Planned Parenthood.

It seems every week, there’s news of a new abortion restriction or proposal: Mississippi just approved the earliest abortion ban in the country at 15 weeks; Iowa is considering a ban as soon as the fetal heartbeat is detected. Several states, including Nebraska and Arizona, have attempted to defund Planned Parenthood. Last week Tennessee Gov. Bill Haslam signed into law a bill that could strip Tenncare (Tennessee Medicare) funding from Planned Parenthood after federal approval.

For the last 12 years of this debate, Cecile Richards has been many things to different people. As the president of Planned Parenthood, she’s been described by some as a “mass murderer” and others as a “genius.” Richard’s time at Planned Parenthood has been rife with controversy.

There was a very public spat with the Susan G. Komen foundation. And then in 2015, an anti-abortion activist group secretly recorded video footage showing one abortion clinic making fetal tissue available to anti-abortion activists posing as researchers, which led to an intense Congressional hearing. A few months later, a deadly shooting at a clinic in Colorado led to questions about how much Planned Parenthood could really protect patients.

Richards recently announced that after 12 years, she’s stepping down, which shocked some: Many activists feel under attack like never before and that this is the time to step up the fight. Anti-abortion activists celebrated but lamented Richard’s legacy. And this month, Richards' book, "Make Trouble: Standing Up, Speaking Out, and Finding the Courage to Lead — My Life Story," was released by Touchstone.

Jasmine Garsd: I think for a lot of people, in liberal environments, the presidential election felt like they came out of nowhere. There’s been so much talk about echo chambers — liberals only hearing each other and conservatives in their own bubble. You grew up in Dallas, Texas, in the 1950s and ‘60s. Do you feel surprised by what’s happening now? Do you feel like you understand this conservative movement in a way maybe someone raised in a liberal environment wouldn’t?

Cecile Richards: You know, I traveled for Secretary Clinton as a volunteer and I spent a lot of time around the country, where I knew this race was going to be very tough ... Of course, I think we were all shocked that this country would elect Donald Trump as president. But I also knew how hard it was going to be for the first woman candidate because I’d seen that with my mother when she ran for governor of Texas. (Richard’s mother is Ann Richards, former governor of Texas.) Women are expected to be everything to everybody. They are judged so much more harshly.

I did grow up in Texas, which was a conservative state, but it was a very live-and-let-live state. And that isn’t what I see with this government or this president. This is much more totalitarian, authoritarian government. That’s not the Texas I grew up in. Certain news services, Fox News, in many of these small towns in rural America, that’s the only news source. The president has clearly gone after the media. Record numbers of people now say they don’t trust the media. That didn’t happen by accident. This is an intentional attempt by this government to discredit sources of information that people have counted on for decades.

I think it’s distressing to see a government taking aim at its own citizens, whether it be women, LGBTQ people, Muslims, immigrants from other countries. But I think, as we’ve also seen in the US, it has galvanized a generation of activists like we’ve never seen before.

I wonder if there’s a sense among Americans who are not reproductive rights activists, that you’ll always be able to get an abortion in this country. That there will be legislators who will try and make it impossible, states where it will be more difficult, but that reproductive rights are here to stay.

Well, the most recent polling I’ve looked at undercuts that. There is a very high understanding and awareness among women in particular that their ability to access reproductive health care, and that their ability to make their own decisions and control their own bodies are really at risk under this government. And that has never happened before.

I think you’re right, that before the election people assumed that there were some restrictions on abortion access or birth control, but that by and large people could access services if they needed them. That is no longer true. And I think it’s because of the attack Speaker Ryan and this president made, particularly on Planned Parenthood that raised the consciousness level among American voters.

We’re living in the era of #MeToo and #TimeIsUp. What role do you think men play in the conversation about reproductive rights?

It’s interesting just even at Planned Parenthood, men play a bigger role than ever before, even as patients. I mean it’s sort of the fastest growing population coming to us for healthcare, young men. And to me that’s a really good sign, because as we know, sexual and reproductive health care isn’t just a women’s issue.

And I do think that when you poll men in America, they are as supportive of reproductive rights as women. But we just have to make it more salient as a voting issue. Where I feel I see change, and really I feel hopeful, was at the historic women’s marches in the US, the biggest women’s marches we’ve ever seen in recorded history, it was the number of men that showed up. And the number of men who were there because they now — and I think this is a generational change — they now believe that their daughters should have every opportunity that their sons have. And that is a shift in this culture.

One thing you mention in your book is that the US has always been a model of civil rights struggles to the rest of the world. What do you think about what is happening now and what impact it will have on other countries?

There’s no way to overstate the disruption in global relations and how people view the US.

I’m specifically concerned about the impact of our policies and attitudes towards women and toward reproductive health care. You know, the first act by this president was not only to reinstate the global gag rule, but actually to expand it. It’s a law that prevents global family planning organizations from getting any funding if they even mention abortion, even in countries where abortion is completely legal. And now for the first time, that includes organizations that are working to combat HIV and AIDS and ZIKA. It is devastating.

And so, unfortunately, now we at Planned Parenthood have to not only continue to support the programs that we do in Africa and Latin America, but also be the eyes and ears on the ground, to communicate back to office holders in the US about the devastating consequences of our policies, on the health and safety of people everywhere.

I mean, it’s really discouraging. We saw here in the US, right after this president was elected, we had a 900 percent increase of women trying to get into Planned Parenthood, to try and get an IUD that would last folks for several years. Because they were fearful that access to birth control would be lessened or even eliminated. And now we’re seeing that [with] Planned Parenthood Global … women have been lining up by the thousands to get birth control under programs that have been slated to be cut. I mean, there is nothing pro-life about a policy that is basically going to threaten the well-being of some of the most vulnerable women in the world.

As I’m sure you’ve been following, there have been massive mobilizations in parts of Europe, Latin America, for the legalization of abortion. Do you think there is something for American activists to learn from movements abroad?

What lasting democracy is, to me, is grassroots democracy. You know, a right is only as good as it is enforceable. And that’s what we’re seeing in the US of course: that politicians have been eroding a right that many women assumed that we would have forever.

So it has been incredibly exciting to see not only the mobilization of people all over the world standing up for reproductive rights, abortion rights, but I think to begin to see that in the US as well. When I started at Planned Parenthood 12 years ago, I heard from women a lot, of a certain generation, saying “where are the young people? This is a right we fought for, and we won. But now it’s sort of taken for granted.” And that’s one of the consequences of the Trump administration: No one is taking it for granted anymore.

Why step down now?

I’ve been an organizer all my life. I’ve been at Planned Parenthood for 12 years. And part of my … I guess my commitment as a social justice leader is to invest in another generation. And to also be willing to make space for them. I feel like it’s important to not just talk the talk, but also walk the walk. I have been an activist my entire life, and I will continue to be an activist. I will be cheering along the sidelines for the next presidents of Planned Parenthood, and proud to do so.