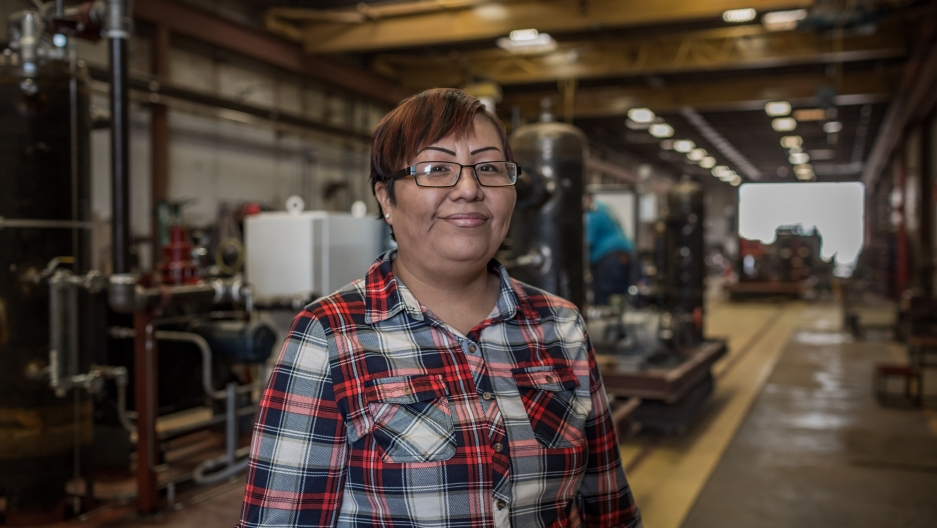 Ronna Stone works at S and R Compression in Tulsa, Oklahoma. Since graduating from Women in Recovery in 2017, she's laid aside her past and made a new life for herself.

The reception area at S and R Compression in Tulsa, Oklahoma, is pretty standard. An assortment of People and National Geographic magazines are neatly placed on tables in a small, dimly lit room. On the walls are large, detailed pictures of the machines the company makes for vapor recovery (for use in the oil and gas industry).

In the waiting area, a woman greets people and takes phone calls from her desk — it's 40-year-old Ronna Stone. She has short, black hair styled into a pixie cut. Stone is naturally reserved but is known to break out into a loud laugh at times. She talks about her weekend plans — a visit to a local museum and maybe the aquarium. This is the new Ronna Stone. A woman with a good job, a social life and a stylish haircut.

A little more than three years ago, things were very different. She was broke and sitting in the Tulsa County Jail until someone offered her a lifeline and a second chance.

Oklahoma has the highest rate of female incarceration in the nation, according to the US Bureau of Justice. The number of women headed to prison or jail is going up in every county except one: Tulsa County. Some people attribute the county's strides to Women in Recovery, an 18-month treatment program that is held up as a model for helping women rebuild their lives and reconnect with their families.

Since 2009, Women in Recovery has helped more than 500 women get custody of their children, land a job and heal from the trauma that led them to addiction in the first place, according to Mimi Tarrasch, who leads the program. Women in Recovery staffers compare addiction to a disease such as cancer or diabetes — something that requires long-term treatment and maintenance. That's why the program isn't just 60 or 90 days, like others. That isn't enough time, some advocates say, to heal from the trauma that led to a life of using and selling drugs in the first place. And Stone has certainly experienced plenty of trauma in her life. 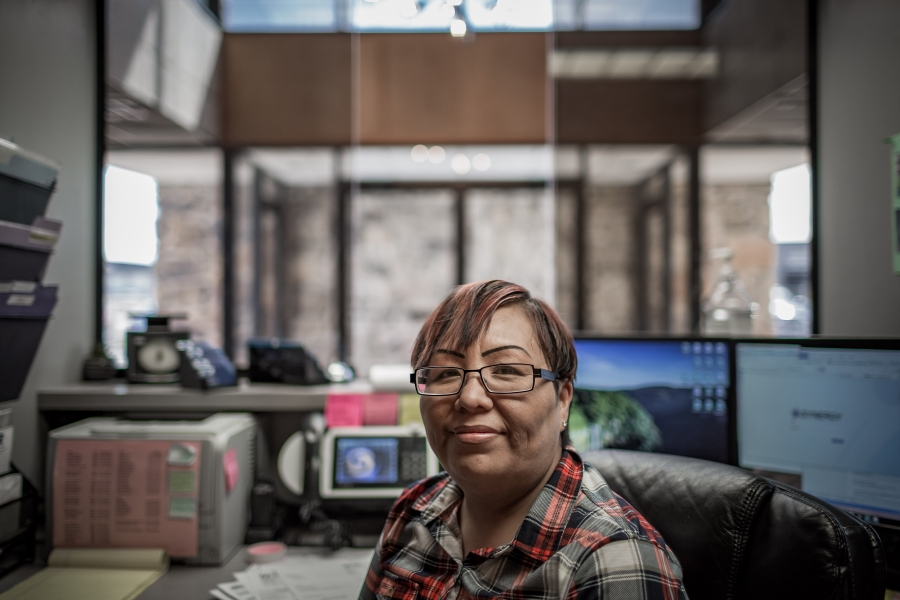 Ronna Stone sits behind the desk at the S and R Compression reception area. She got this job after graduating from the Women in Recovery program in Tulsa, Oklahoma.

Stone grew up in a small town called Rocky Boy in Montana. She's Chippewa Cree on her mom's side and remembers traveling back and forth between the United States and Canada a lot as a child. Stone's involvement in the drug life began early. When she was a baby, her mom would put drugs in her diapers when they visited Stone's dad in prison. At age 12, Stone says she was raped by a friend of a cousin's at a party.

She later found out she was pregnant as a result of that rape. Her rapist threatened her life and her baby's, Mark, and controlled her for years afterward. Stone ran away from the man numerous times. She doesn't remember how many. He would somehow find her by threatening friends or relatives and then drag her back into his life and force her to sell drugs for him.

“It came to the point where nobody would want me around because they knew he would come and take my baby and hide him," Stone says. "The very last time I ran, he took me and my baby out to this field and put a gun to my baby’s head and my baby was like 8 years old. He threatened to kill me and my baby.”

It was the last time she saw her abuser. She escaped, but was still leading a life of addiction and stealing others' identities to get away and hide.

In 2015, she was looking at another prison sentence until someone paid her a visit at the Tulsa County Jail. It was someone from Women in Recovery. Stone broke down. She said she was ready to quit using. Her son, Mark, had been shot and killed in a drug deal gone wrong. He was 23. The woman from Women in Recovery offered her a choice: Enter this treatment program, and we will help you, or go to prison, again.

Entering Women in Recovery was the first step in Stone's new life. She quit using methamphetamines. But the program is unique in that it doesn't just focus on detox. Stone participated in daily group and individual therapy. She attended job training classes. She began unlearning the behavior that led her to rock bottom. She says the program was intense and that getting off drugs was the easy part.

“I just couldn’t be around people," she says. "I didn’t know how. So, that made me feel alienated and stuff."

After years of being on the run, she felt isolated. She didn't know how to relate to other women.

"So, the biggest part was being around these women and getting to know them and you know when I got through that it was like, you know, I really like everybody. I like being here.”

After years of living a life of addiction, things began to change for Stone. She stuck with the program and graduated in 2017 along with about a dozen other women. Instead of having another prison sentence, she's off drugs and contributing to society. And that's a huge saving to taxpayers in the state of Oklahoma.

According to Women in Recovery, it costs them about $19,000 per year (individually) to rehabilitate women. Separately, a spokesperson with Oklahoma's Department of Corrections says it spent $16,653 per female inmate in 2016, for rehabilitation.

However, women served by the state do not receive the same kind of care and rehabilitation services Women in Recovery offers. And while there are specialty drug courts and other court-ordered treatment programs throughout Oklahoma, those are funded by cash-strapped counties and are few and far between. Women in Recovery is privately funded through the George Kaiser Family Foundation. 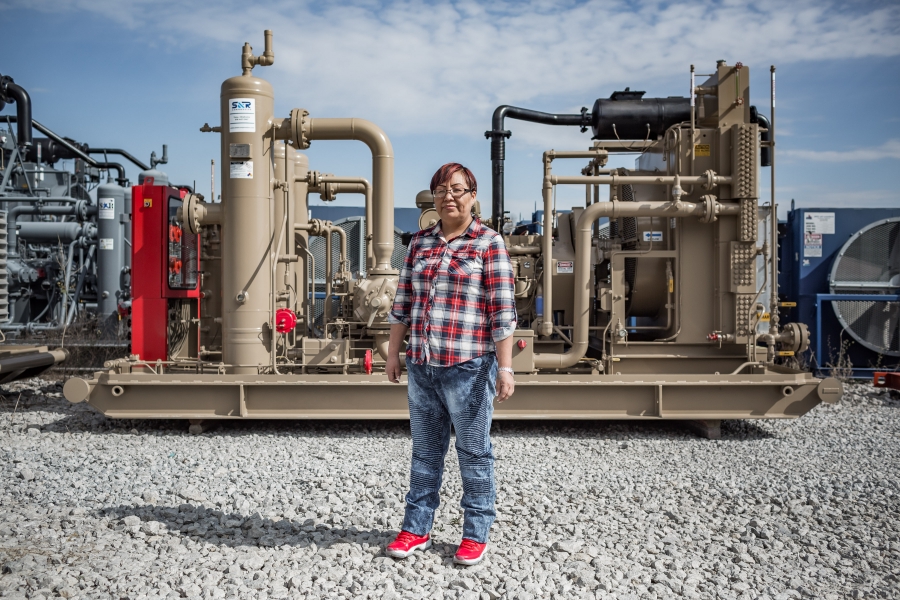 Ronna Stone works at S and R Compression behind the front desk in Tulsa, Oklahoma. S and R currently has six other women working at the facility who are Women in Recovery graduates. They start out in a janitorial position and then get to move up. Behind Stone is one of the machines the company builds for vapor recovery for use in the oil and gas industry.

A new job and a new life

Stone graduated from Women in Recovery in 2017. She was working two jobs and owed almost $8,000 in fines and costs related to her arrest. She needed a better job.

Enter Christy Sanders, Stone's boss at S and R Compression. She's dedicated to helping women like Stone who need a second chance and knows that getting a good job is the key to staying away from a life of addiction.

Sanders has hired a number of women from the Women in Recovery program — S and R can offer both better-than-average pay and the opportunity to learn a new skill. "If you can't support yourself, what then? These women would just drift back to the people that brought them down."

Sanders has made it a point to hire more women to weld, paint and build large machines just like the men on the shop floor do.

A year later at S and R, Stone is different — less shy — and in general, more comfortable around people.

“From my past, everyone’s always seen the worst in me but now I have people who see the best in me and give me a chance and an opportunity," Stone says about her new job. "I’m inspired here. It just makes me want to overcome all life’s circumstances in my past.”

Stone is slowly paying off her fines and fees. She moved into a new apartment. She has a car and enjoys being social. She still stays connected to Women in Recovery and is determined to move up at S and R.

"I have flashbacks from my past sometimes where I had nothing," she says. "That’s why I come to work on time every day because I never want to be that person that doesn’t have enough money to pay rent. I never want to go back to that again."