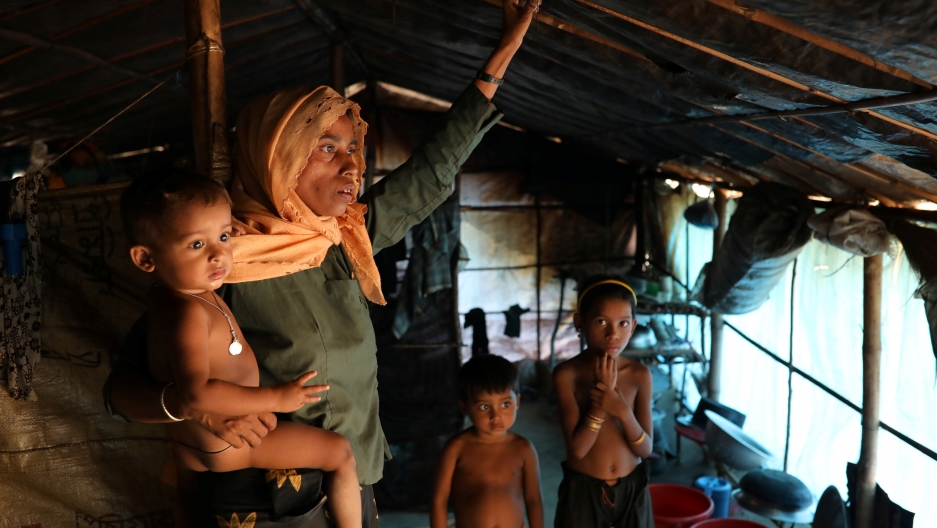 Hasina Khatun, 35, whose husband Dil Mohammed was among 10 Rohingya men killed by Myanmar security forces and Buddhist villagers on September 2, 2017, poses for a picture with her child at Balukhali camp in Cox's Bazar, Bangladesh, March 21, 2018. Picture taken March 21, 2018.

Conditions in crowded camps in Cox's Bazar in Bangladesh have deteriorated for nearly 700,000 Rohingya as aid workers race to strengthen shelters ahead of monsoon season, the International Federation of Red Cross and Red Crescent Societies said.

Steve McAndrew, head of its emergency operations in the coastal area, said its clinics were scaling up to combat possible outbreaks of cholera and other water-borne diseases feared with the rains that could arrive this month.

Desperation has grown among the Muslim Rohingya, who fled a military crackdown last August in Myanmar's Rakhine state and many see scant chance of returning, he said in an interview on Monday.

"It's hot, it's hard to find water and food, and the conditions are getting worse. And they are going to continue to get worse as the rainy season comes and then we have a monsoon season and cyclone season," McAndrew told Reuters at Federation headquarters in Geneva.

"The situation is getting worse, and it's open-ended and there is no end in sight," he said.

The U.N. refugee agency UNHCR said last week conditions in Myanmar were not ready for a safe return of the Rohingya.

Rohingya are fleeing a "horrendous" situation, McAndrew said, while declining to apportion blame.

"People are losing their families, their villages are being destroyed. A lot of the people are saying they don't even want to know what's going on back home anymore. They seem to have just decided they will not go home."

His agency is reinforcing the flimsy bamboo and plastic structures in which the Rohingya live in Cox's Bazar so they can withstand the rains, and a new site is being prepared for those most at risk, McAndrew said.

"We believe we can move around 25,000 families about the first of May ... We have satellite maps of the potential flood zones and the gullies where we know they are going to get flooded out.

"We're drilling wells, we're putting in latrines, we're working with the U.N. and other agencies preparing this site around the clock," he said.

McAndrew, who headed the Federation's operation in Haiti when cholera erupted there in late 2010, said of Cox's Bazar: "We're highly concerned about outbreaks in the upcoming rainy season, especially cholera and other water-borne diseases."

The agency was pre-positioning medical supplies and preparing its clinics to treat cholera, which thrives in unsanitary conditions.

The Federation's appeal of 33.5 million Swiss francs ($34.92 million) is only 55 percent funded, McAndrew said. "It's just not enough in front of the scale of the needs."