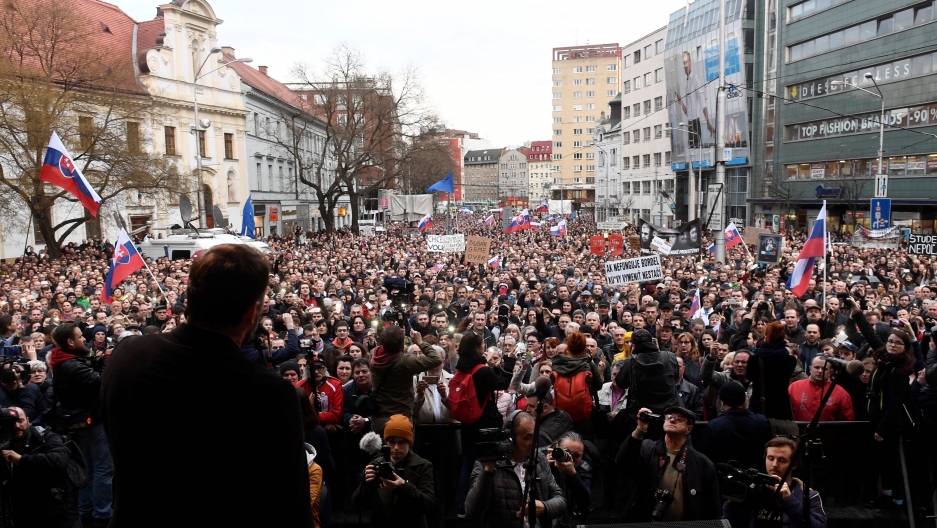 People attend a protest rally in reaction to the murder of Slovak investigative reporter Jan Kuciak and his fiancee Martina Kusnirova, in Bratislava, Slovakia, April 5, 2018.

Tens of thousands of Slovaks returned to the streets on Sunday to keep up pressure on the government for reform seven weeks after the murder of a journalist that sparked a political crisis and brought down a prime minister.

The killing of Jan Kuciak, 27, who investigated corruption among politically-connected business people, and his fiancée at their home in February increased widespread anger about persistent corruption allegations, leading to the largest near-weekly protests since the end of communism in 1989.

Amid growing pressure last month, long-serving prime minister Robert Fico stepped down to save his three-party government, and picked his deputy, Peter Pellegrini, to lead a reshuffled cabinet.

News website Dennik N estimated that Sunday's protest drew around 30,000 in the capital Bratislava, about half the size of the biggest protests last month. Demonstrators want the police chief and the special prosecutor out and a crackdown on corruption.

"Slovakia has to be a country where corruption, not courage, is punished," one of the organizers Karolina Farska told the rally.

In office since 2004, special prosecutor Dusan Kovacik is responsible for prosecuting abuse of power and corruption among public servants and politicians. According to data from his office last year, he has overseen 61 cases between 2009-2017 and has not pressed criminal charges against any of them.

Police president Tibor Gaspar is also refusing to quit although the new interior minister is reviewing his work in his five years in the post.

No senior politician has gone to prison for corruption in that time, according to Transparency International. About 48 percent of bribe cases dealt with by courts involved amounts of less than 100 euros.

"All the scandals that went unpunished brought me here. So far only puppets in the government have changed but we haven’t seen real change," protester Martin Mataseje, a 39-year old IT consultant, told Reuters.

Interior Minister Tomas Drucker is yet to alter the leadership of the police but has agreed to change the law allowing him to name Gaspar's successor to ensure an impartial investigation of Kuciak's murder.

Police believe Kuciak's murder was related to his work. He reported on suspected tax fraud by people some of whom have links to the ruling Smer party.

Some of his reporting was on deals between the government and the country's biggest privately-owned security firm, whose owner is related to Gaspar. He has denied any wrongdoing.

Kuciak was also investigating Italian businessmen in Slovakia with suspected mafia links, one of whom had had dealings with two people who later worked in Fico's office before resigning in the wake of the murder.

The two have denied any links to the killing.