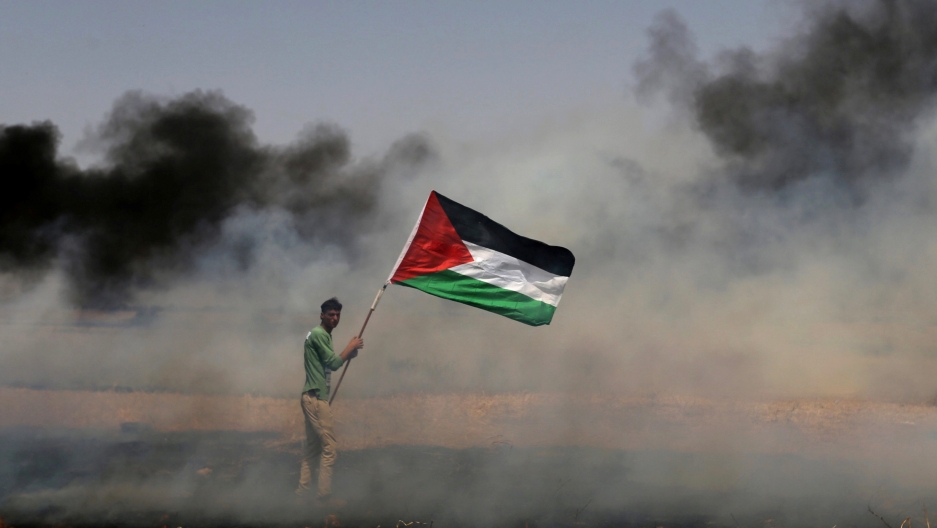 A demonstrator holds a Palestinian flag during clashes with Israeli troops at a protest where Palestinians demand the right to return to their homeland, near the Israel-Gaza border in the southern Gaza Strip on April 13, 2018.

Every Friday for the past three weeks, thousands of Palestinians in the Gaza Strip have taken part in demonstrations at several different locations alongside the Israeli border fence.

Israel’s military says the protests are not just peaceful demonstrations, and its soldiers have responded with deadly force, including rubber bullets and live ammunition.

Hundreds of Palestinians have been shot and wounded since the end of March. At least 33 have been killed so far. And the demonstrations are expected to continue for several more weeks.

Palestinian organizers have named the protests the "Great March of Return.” That’s a reference to events that Palestinians call the Nakba, an Arabic word meaning catastrophe that marks the creation of the state of Israel in 1948 and the dislocation of hundreds of thousands of Palestinians from their homes.

May 15 is the 70th anniversary of the Nakba, and the protests are intended to highlight the Palestinian right of return for refugees and their descendants.

Mohammed el-Baghdady, a Palestinian citizen, has not gone to the protests himself. He lives in Gaza City and works for the Norwegian Refugee Council, an international humanitarian organization. But he says he knows many people taking part in the demonstrations.

“Civilians are trying to protest and exercise their rights,” Baghdady says. “If you want to understand why the people are going [to the protests], you have to look at the situation in Gaza in general.”

The population of the Gaza Strip is close to 2 million people. And there is widespread suffering, Baghdady says. “This blockade is still having an impact on all aspects of life,” he adds.

The local economy is in a state of collapse, Baghdady says. There is no freedom of movement for the population. There are food shortages, medicine shortages and constant interruptions to electrical power.

In the last decade, there have been repeated outbreaks of violence with Israel. “You have a whole new generation of children [in Gaza], they know nothing about life but this blockade and ongoing violence,” he says.

With lives like that, Palestinians may feel they have little to lose.

“The whole situation in Gaza is really bad,” Bagdady says. And Palestinians want to stand up for their right to return to their ancestral lands, he adds. “That’s basically the main theme of the demonstration.”

Not far from Gaza City, on the Israeli side of the border fence, is Kibbutz Sufa. It’s one of the Israeli communities that sits alongside the Gaza Strip.

Eyal Brandeis has lived there for 32 years. From his house, he says he can see the smoke from burning tires and hear voices during the Friday protests on the other side of the fence.

“I can understand the frustration of the Gazan people,” Brandeis says. “Then again, I know that the protest is not spontaneous. It is well-organized by the Hamas government.”

The Islamist militant group seized control of the Gaza Strip in 2007 in a violent coup. Brandeis says the fact remains that Hamas does not want to live in peace with Israel. “So, I cannot accept their demands to throw me out of my house,” he says.

“It’s not for me to say if I support the [Palestinian] right to protest,” Brandeis says. “I do not support the demand for us …to leave our homes.”

“I would like us both to live here in peace. They can live in Gaza, and I live where I live, and we can live in peace. I can understand the protest, but I think the protest should be against the Hamas government, not against Israel.”

Brandeis says he understands the dilemma that Palestinians in Gaza find themselves in. But he asks why people are not putting pressure on Egypt to loosen its border restrictions with Gaza.

“We have a right to defend ourselves, and we have to do this blockade, because if we don’t we won’t be alive,” Brandeis says. “The world should see what is going on.”