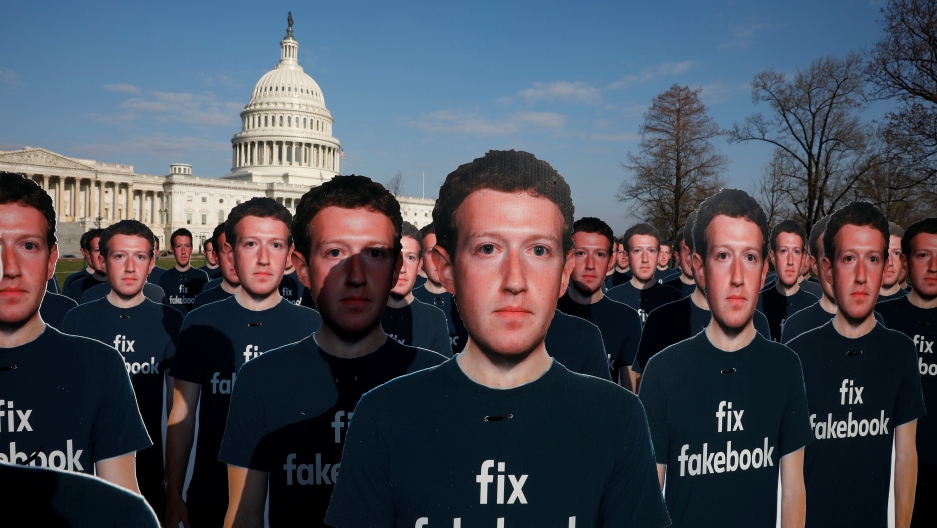 Dozens of cardboard cutouts of Facebook CEO Mark Zuckerberg are seen during an Avaaz.org protest outside the U.S. Capitol in Washington, U.S., April 10, 2018.

Digital rights and civil society groups in Myanmar say they welcome a pledge by Facebook CEO Mark Zuckerberg to better address hate speech and other content inciting violence, but said the platform could do more to stop the spread of content that violates the platform’s Community Standards.

Related: Lawmakers want to know about Facebook's operations beyond the US

Civil society groups in Myanmar say Facebook has routinely been slow to, or outright failed to take down hate speech, as well as “fake news” and misinformation that they say further inflamed already-existing tensions between the country’s Buddhist-majority and Muslim-minority populations.

They also say Facebook has done a poor job removing offenders from its platform.

While Myanmar is still a relatively small market for Facebook (with an estimated 14 million as of January 2017, according to Statista), for many of Myanmar’s internet users, Facebook is synonymous with the internet, and a top source for news and information.

United Nations officials investigating a suspected genocide in the country said in March that Facebook played a “determining role” in spreading misinformation and hate speech that led to violence.

Questions about the company’s role in the ongoing ethnic violence in Myanmar came up during a set of Congressional hearings this week, organized in response to revelations that the data of as many as 87 million Facebook users was harvested by Cambridge Analytica, a political firm with ties to the Trump campaign. 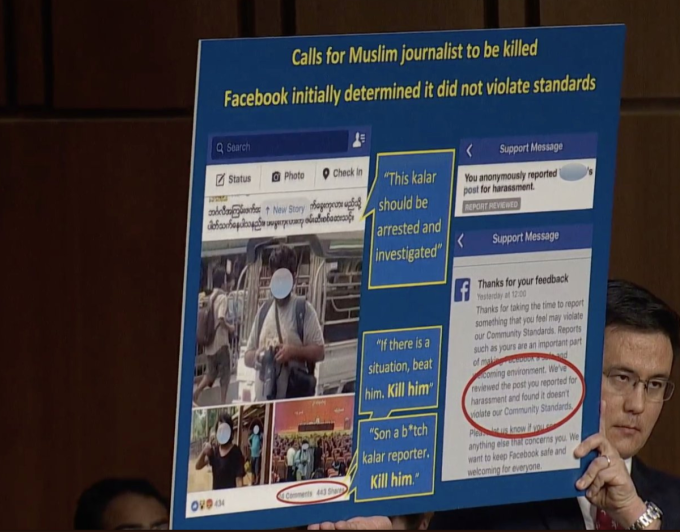 “This is the type of content I'm referring to,” Sen. Patrick J. Leahy, a Democrat from Vermont, said during Tuesday’s hearing, as an aid held up an enlarged image of a Facebook post written in Burmese, calling for the death of a Muslim journalist. “Now, that threat went straight through your detection systems, it spread very quickly, and then it took attempt after attempt after attempt, and the involvement of civil society groups, to get you to remove it.”

Asked to whether the company would “dedicate, resources to make sure such hate speech is taken down within 24 hours,” Zuckerberg responded, “Yes. We're working on this.”

“We really welcome the 24-hour commitment ... because that's the first time that they're really attempting to set a target which is quantifiable and that we can work towards and hold them accountable to,” said Victoire Rio, a Yangon-based social media analyst.

Rio spoke on behalf of six civil society organizations that recently wrote a letter to Zuckerberg slamming his defense of Facebook’s systems in Myanmar. (Zuckerberg later sent an apology letter to the groups.)

But she says Facebook can do much more to address abusive posts in the violence-stricken country, including establishing a team that is based in Myanmar.

“At this point, there is no one … from Facebook in Myanmar,” Rio said. “So it's really important that there be a team in Myanmar that speaks the local language, understands the context, and can serve as an interface for the local community here.”

Facebook did not respond to multiple requests from PRI on whether the company has, or plans to create a dedicated team in Myanmar. Facebook also did not respond to an inquiry about Burmese-language-speaking staff working as content moderators.

During questioning on Tuesday, Zuckerberg said the company would ramp up its effort in Myanmar “dramatically” by hiring dozens of Burmese-language speakers and “working with civil society to identify specific hate figures so we can take down their accounts, rather than specific pieces of content.”

Zuckerberg added that he and his team are “doing specific product changes in Myanmar and other countries that may have similar issues.” Facebook did not respond to an inquiry about what those changes will look like in Myanmar.

“Commitments are great and we really welcome this commitment,” Rio said. “But we are longing to see action. And we've been we've been asking for this action for a long time.”