Joyce McRorie, holding the paws of one of the rescue greyhounds, co-founded Fast Friends, a nonprofit that takes greyhounds reaching the end of their racing lives in Mexico and finds them new homes in the United States. Joyce and her husband Tom say they've rescued some 4,000 dogs.

It’s pre-dawn and in the driveway of his home outside of Los Angeles, Tom McRorie is attaching a trailer to his SUV and getting ready to drive south to make an unusual pick-up: 23 greyhounds, who have been living and competing at Tijuana’s Caliente race track.

Today, McRorie will do what he and his wife, Joyce, have been doing for years — trekking to the race track to load the greyhounds into a mobile kennel. It’s the mission of Fast Friends, the non-profit that the couple began 30 years ago that brings the dogs back to the United States, where they are connected to new homes with people wanting to adopt them.

“Some weekends, we have gotten over 100 dogs out of there,” says McRorie.

All told, the couple says they have rescued at least 4,000 greyhounds in Tijuana since starting the nonprofit.

“If the dogs weren’t adopted, their fate would be bleak,” McRorie says. “They would wind up being euthanized. As soon as they become unwanted animals, everybody knows what happens to all unwanted animals — if they don’t get adopted they get put down.”

Dog racing, featuring greyhounds that can reach speeds of over 40 mph, is still followed by people in the US, UK, Ireland, Mexico, and elsewhere. Its popularity has dropped in recent decades as concerns about the dogs' welfare and treatment grow. In the US more than 40 states, including California, have banned dog racing.

Manuel Pérez takes care of the greyhounds, or galgos in Spanish, at the track and helps McRorie load them in his kennel. Pérez says that he grows attached to the dogs and is sorry to see them leave. "But I’m so glad to see that they are being taken to new homes,” he says. “Mexico is a poorer country. Dog adoption is not as common here as in the US.” 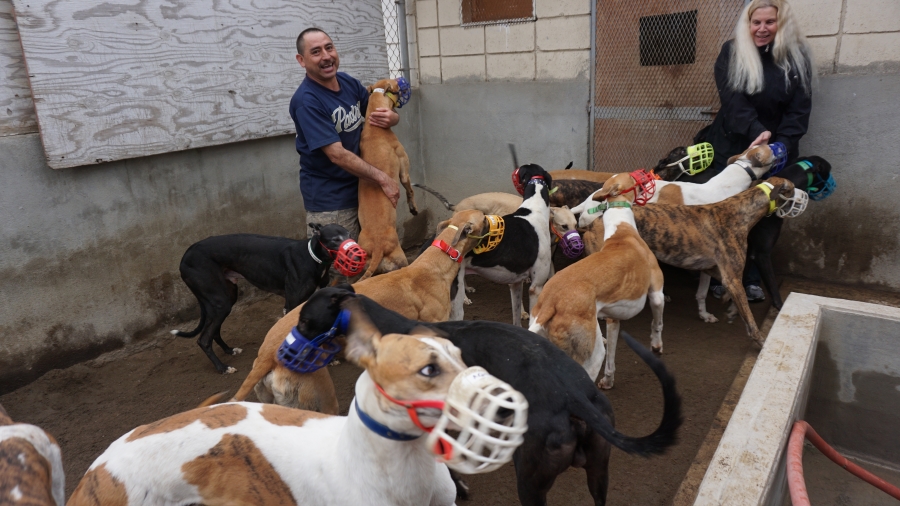 Manuel Pérez, who helps care for greyhounds at a race track in Tijuana, Mexico, gathers aging-out greyhounds. They will board a trailer headed for the United States and new homes there.

The race track in Mexico holds hundreds of greyhounds in its kennels and is part of the US dog racing circuit (nearly all of the dogs have also been imported from the US).

McRorie says that he has been criticized by some animal rights organizations for collaborating with the Tijuana race track and accused of perpetuating an industry that exploits and sometimes abuses the greyhounds. McRorie pushes back, arguing that as long as dog racing exists, there are two options for the dogs when they are done with racing, typically at age 5: adoption or death.

“Once you meet a greyhound, these are such magnificent animals, how can you sit on the sidelines and do nothing? I can’t let that dog be put down,” McRorie says. 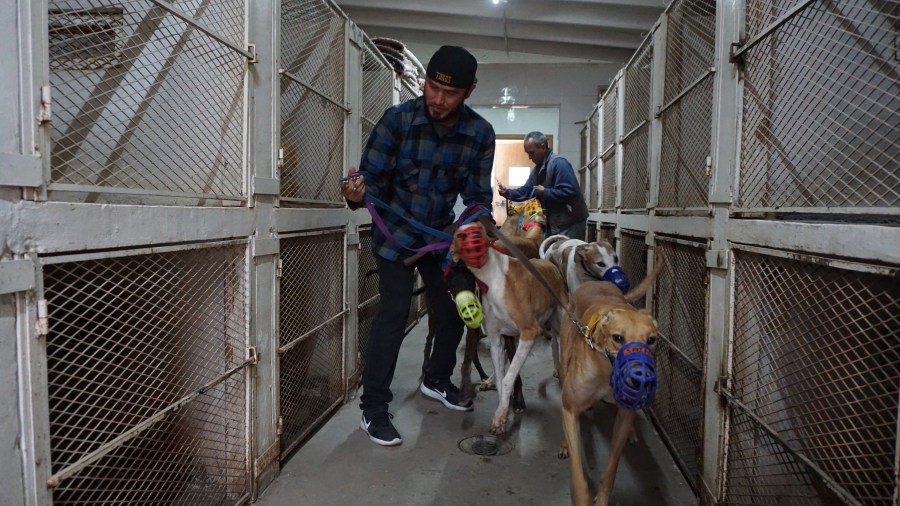 A group of greyhounds who raced at a track in Tijuana, Mexico are loaded onto a mobile kennel bound for California. “If the dogs weren’t adopted, their fate would be bleak,” says Tom McRorie, who co-founded Fast Friends, a nonprofit that brings greyhounds from the race track to the US for adoption.

Back at McRorie's home in California, and after clearing customs at the US-Mexico border, a team of volunteers take over to unload the dogs and help with their transition. The dogs are given a medical check-up and are cleaned, a process that involves dipping their feet in an anti-tick solution.

Volunteer Brittany Petty says she is amazed at how quickly the greyhounds adapt from being racetrack competitors to loving pets and companions.

"This is like an alien world for them," she says. "But they totally transform. It’s like a metamorphosis. The good thing about them is that they’re used to routine, and if you’re consistent with them, they learn so fast."

Fast Friends co-founder Joyce McRorie says that devoting her life to so many dogs for so long has brought joys and burdens. "I’ve got to be honest with you that, sometimes, I think 'what the heck have I done?' But then there are days like this," she says, watching the scene of greyhounds gently nuzzling up against strangers.

After staying with foster families, most of the dogs transported from Tijuana are placed in permanent new homes within a month, with their days of competition and racing behind them.

Do you have a rescue greyhound from Tijuana? Send us your dog photo at @pritheworld and tag it #rescuegreyhound.