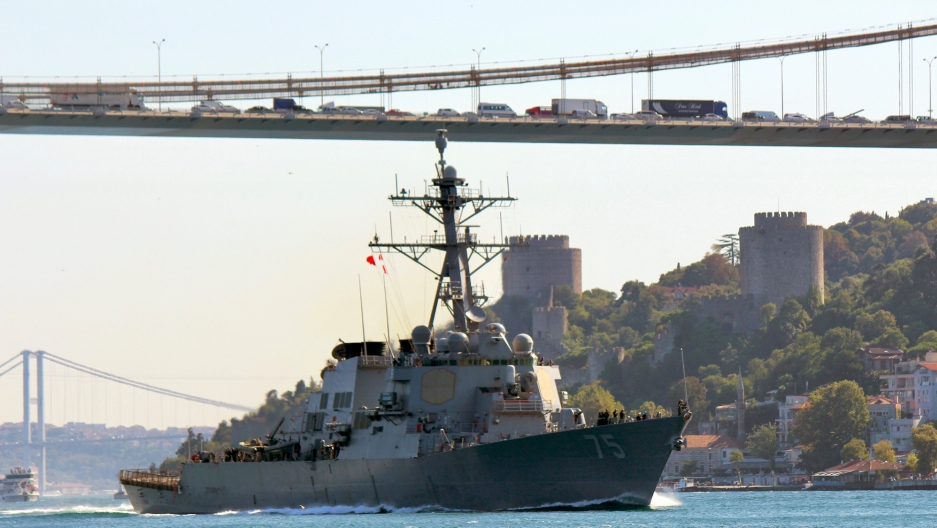 President Donald Trump is casting doubt over the timing of his threatened strike on Syria as fears of a military confrontation between Russia and the West run high.

"Never said when an attack on Syria would take place. Could be very soon or not so soon at all!" said Trump in his latest early morning tweet.

Never said when an attack on Syria would take place. Could be very soon or not so soon at all! In any event, the United States, under my Administration, has done a great job of ridding the region of ISIS. Where is our “Thank you America?”

That appeared a day after he tweeted that missiles "will be coming" after the April 7 chemical weapons attack alleged to have killed dozens of people, and lambasted Moscow for standing by Syrian President Bashar al-Assad.

Prime Minister Theresa May prepared to convene a special cabinet meeting Thursday to weigh whether Britain should join the United States and France in a possible military action.

May recalled ministers from their Easter holiday to debate action over what she has cast as a barbaric poison gas attack by Syrian government forces on civilians in the formerly rebel-controlled town of Duma, just east of the capital Damascus.

There were signs, though, of a global effort to head off a dangerous conflict pitting Russia against the West. The Kremlin said a crisis communications link with the United States, created to avoid an accidental clash over Syria, was in use.

"The situation in Syria is horrific, the use of chemical weapons is something the world has to prevent," Britain's Brexit minister David Davis said on Thursday morning.

"But also it's a very, very delicate circumstance and we've got to make this judgment on a very careful, very deliberate, very well thought-through basis."

French President Emmanuel Macron said he would decide whether to strike Syrian government targets after the reported attack by internationally banned chemical munitions in Duma once all the necessary information had been gathered.

"We will need to take decisions in due course, when we judge it most useful and effective," Macron said, adding that all the necessary verifications had to be carried out first.

He said he would also strive to prevent an escalation of conflict across the Middle East.

At the eye of the storm, Assad said any Western action "will contribute nothing but an increase in instability in the region, threatening international peace and security," Syrian state television reported.

Russia, Assad's most important ally in his seven-year-old war with rebels, said it had deployed military police in Duma on Thursday after the town was taken over by government forces.

"They are the guarantors of law and order in the town," RIA news agency quoted Russia's defense ministry as saying.

Syria's military has repositioned some air assets to avoid fallout from possible missile strikes, US officials told Reuters on Wednesday.

Syria's attempt to shelter aircraft, perhaps by locating them alongside Russian military hardware that Washington might be reluctant to hit, could limit damage that the United States and its allies might be able to inflict on Assad's military.

Both Syria and Russia have said reports of the attack were fabricated by rebels and rescue workers in Duma and have accused the United States of seeking to use it as a pretext to attack the government.

The Russian military said it had observed movements of US Navy forces in the Gulf. Any US strike would probably involve the Navy, given the risk to aircraft from Russian and Syrian air defenses. A US guided-missile destroyer, the USS Donald Cook, is in the Mediterranean.

Moscow's ambassador to Lebanon, Alexander Zasypkin, warned on Wednesday that any US missiles fired at Syria would be shot down and the launch sites targeted.

The Syrian conflict has increasingly widened the rifts between Moscow, Washington and European powers and inflamed the bitter rivalries that run across the Middle East.

Syria, Iran and Russia say Israel was behind an air strike on a Syrian air base on Monday that killed seven Iranian military personnel, something Israel has neither confirmed nor denied.

Russian President Vladimir Putin spoke to Israeli Prime Minister Benjamin Netanyahu by phone on Wednesday and urged him to do nothing to destabilize Syria. Netanyahu's office said: "The prime minister reiterated that Israel will not allow Iran to establish a military presence in Syria."

Ali Akbar Velayati, a top adviser to Iran's Supreme Leader Ali Khamenei, said the Western threats were "based on lies" about the poison gas assault, after meeting Assad.

Turkish President Tayyip Erdogan said he had spoken to Trump on Wednesday and would speak to Putin on Thursday night about the chemical attack.

German Foreign Minister Heiko Maas said Berlin wanted to be consulted before any Western military action. "It's important at the same time to maintain pressure on Russia," he said. "If we want to do that, we the Western partners cannot diverge in our approaches."

May has ordered British submarines to move within missile range of Syria in readiness for strikes against the Syrian military that could begin as early as Thursday night, London's Daily Telegraph newspaper said on Wednesday.

The BBC reported that May was ready to give the go-ahead for Britain to take part in military action. She would not seek approval from parliament, the BBC said, despite calls from the opposition Labour Party for parliament to be given a say.

Parliament voted down British military action against Assad's government in 2013 in an embarrassment for May's predecessor, David Cameron. That then deterred the US administration of Barack Obama from similar action.

British Minister Davis said his decision then to vote against action was based on a lack of clear evidence and a lack of a clear plan. "Those two things, I'm assured, we will get an answer to today," he said of Thursday's cabinet meeting.

By Guy Faulconbridge and Vladimir Soldatkin/Reuters