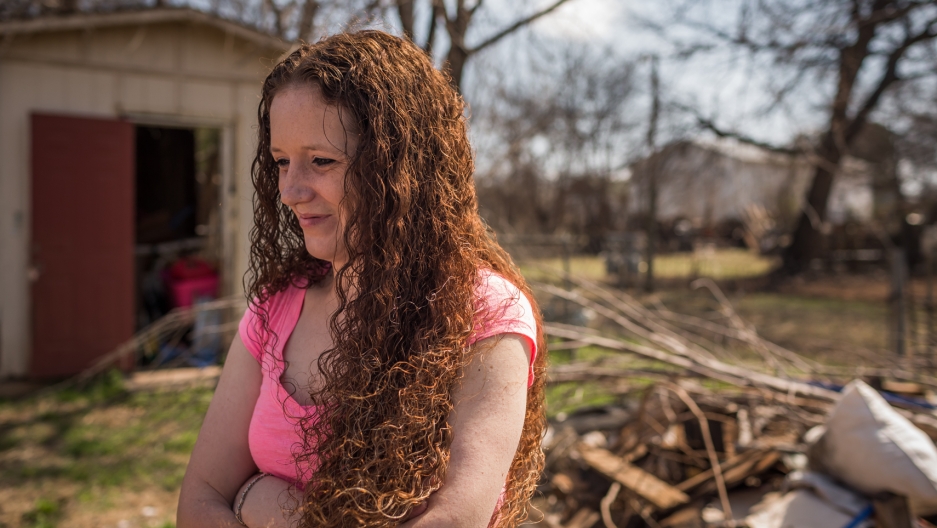 Cherise Greer in the backyard of her home in Duncan, Oklahoma. Cherise is getting back into a routine after being in jail and away from her daughter for almost two years.

The spring of 2016 was a rough time for now 33-year-old Cherise Greer.

She'd just lost her job at Pizza Hut in Marlow, Oklahoma, where she was a regional manager. She couldn't pay her rent and was evicted from her home. She and her daughter, Angelique, then 6, were couch surfing. Oftentimes, Angelique would stay with Greer's grandmother in Duncan, a small town in Stephens County, about 10 minutes away.

Then, Greer got arrested. That June, she was charged with "possession with intent" after the county sheriff found 3.9 grams of methamphetamines and a set of scales in her car.

Greer spent almost a year at Stephens County Jail before she went to Mabel Bassett Correctional Center, a maximum security prison in McLoud, and later, a halfway house for women in Enid. This past February, she was released from Oklahoma's criminal justice system, though now she wears an ankle monitor. She's on probation and lives with her grandmother in Duncan.

Greer says she's resolved to move on and put a lifestyle of addiction and partying behind her. She isn't expecting it to be easy, but for anyone who's served time in Oklahoma prisons, the barriers to re-entry are immense. There are the old pressures, a mountain of fines stemming from prison time and the challenges of trying to get a job, to name just a few.

“There's always going to be that struggle there. But knowing what it has taken away from me and the time that it has taken away; I've missed so much of my daughter's life already, and she's only 8. I don't want to miss any more [time]. And I know that that's what it could do to me," Greer says.

In 2017, Greer was one of more than 3,000 women serving time in Oklahoma. The state has had the highest female incarceration rate in the nation for the last 25 years. Oklahoma imprisons 151 out of every 100,000 women, according to the US Bureau of Justice Statistics — more than double the national rate.

Related: Why Oklahoma has the highest female incarceration rate in the country

Additionally, Stephens County, where Greer lives, is the state's third-highest county for locking up women. There, the sheriff, district attorney and judges have long favored a "lock 'em up" attitude that consistently gets them votes. The result is crowded jails and prisons, overcapacity with nonviolent offenders.

The drug conviction was Greer's second scuffle with the law. In 2013, Greer was arrested in Duncan along with her mother, husband, uncle and a family friend on separate drug charges. The Stephens County sheriff came into their home and found 20 grams of meth. Robyn Allen, Greer's mom, was sentenced to 20 years in prison for drug trafficking.

Greer went to the county jail and got off on probation that time. She's technically out on probation now, but still has 17 years on paper. That means if she uses again, gets a probation violation or is caught with someone else using (even if she isn't), she could go back to prison and serve out those 17 years. 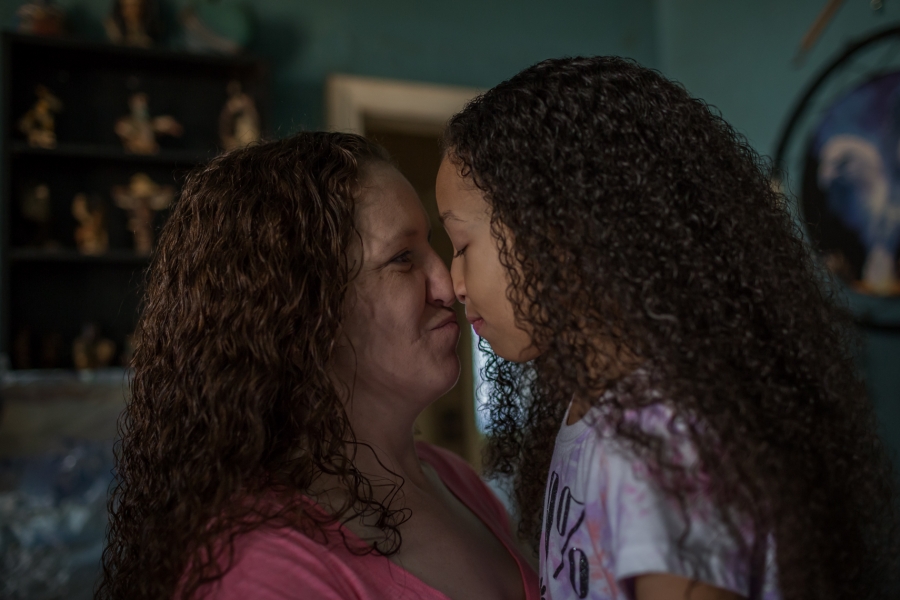 Cherise and her daughter were apart for almost two years while she served time for drug charge.

Legislators, law enforcement and others have been arguing the last few years over meaningful criminal justice reform in the state. In the fall of 2016, voters approved a law reclassifying some drug and property crimes as misdemeanors to ease overcrowding in state prisons. Before the November 2017 election, Mabel Bassett Correctional Center was at 113 percent capacity.

In 2017, the Oklahoma Department of Corrections announced that nonviolent offenders who were within 18 months of finishing their sentence would be released. Greer fell into that category. Still, the Oklahoma Sheriff's Association and certain lawmakers — including one from Stephens County — called the decision reckless and accused the state DOC director, Joe Allbaugh, of releasing "dangerous criminals."

Back in 2016, Gov. Mary Fallin appointed a criminal justice task force to look at the reasons so many people in Oklahoma were ending up in prison. The task force outlined a series of reforms and sent them to the governor, who has acknowledged the state's dubious reputation in locking up women. One of those recommended reforms was to offer specialty drug court programs for those struggling with addiction. But the state is now facing a huge budget shortfall, and such programs are few and far between.

Another recommendation: Reduce financial barriers, like fines and costs tied to prison sentences.

District attorneys and court officials say that collecting those fees is essential to fund their court system. But critics argue that very little of that money ultimately goes toward Oklahoma's criminal justice system.

Ryan Gentzler from the Oklahoma Policy Institute says, “It’s just a very very inefficient system. The responsibility for that does fall on the legislature because they are the ones who have been cutting taxes and don't have money for anything.”

And Oklahoma has been called out for creating a "debtor's prison." In fact, a class-action lawsuit naming the Oklahoma Sheriff's Association alleges that thousands of Oklahoma residents "are being extorted by a collections company working for most of the state's sheriffs and courts," according to a Reveal story.

Greer currently owes almost $10,000 in fines and costs. That doesn't include the $160 per month she must pay for the ankle monitor that she wears. She'll pay for that once her probation is over. 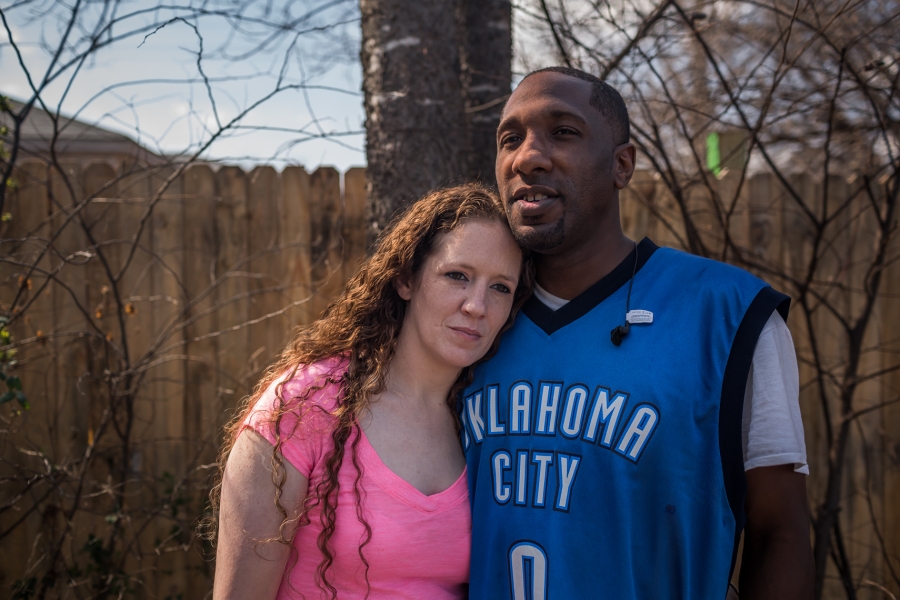 Right now, Greer is without a car and being that she's on an ankle monitor, she’s only allowed out of the house from 8 a.m. to 5 p.m. on weekdays and not at all on weekends. She’s not living with her husband because of her probation, and Angelique is in school. So, she has a lot of time on her hands.

Every day, Greer scours online job boards to see who's hiring. She has leads on a few places. Like a convenience store called Chisholm Corner that serves as a gas station and drive-thru fast food place catering to oil field workers and truckers. She's also applying at the Holiday Inn Express and the Hampton Inn, where a friend works.

Greer has a felony conviction and says some employers in Duncan don't want to hire people who've been in trouble with the law. That's despite the fact that, in 2016, the state signed a law "banning the box" — the question on job applications asking if a person has been convicted of a felony.

She needs that job, though, so she can start making payments on all those fines and fees she has. If she doesn't, it could result in a failure-to-pay warrant, and she could go back to prison.

“In the end, I don't have to worry about that because I do know I have a support system behind me to help me make ends meet but I shouldn't have to depend on them," Greer says. "I'm used to supporting myself, and you know, not having to depend on others to make payments for me or anything like that.”

Greer eventually hopes to get a house with her husband, daughter, grandma and mom (when she is released from prison). She'd like to move to Oklahoma City, away from Duncan. 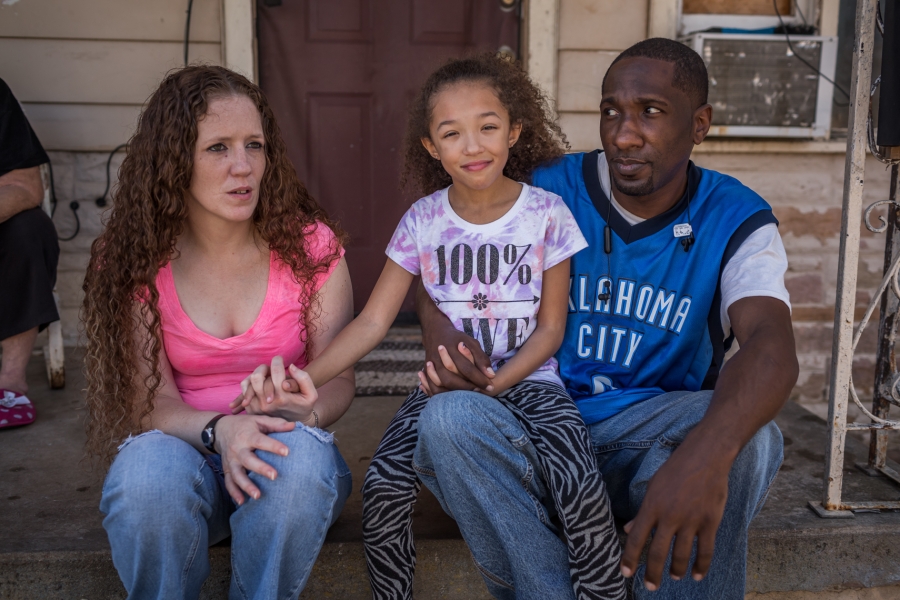 Cherise, Angelique and Adrian all sit on the frot porch of Cherise's grandmother's house on a warm Satruday afternoon in Duncan, Oklahoma. Cherise doesn't want to live in Duncan where she grew up. She'd like to move to Oklahoma City and start over, away from what she refers to as the, "wrong crowd."

Staying out of prison

Greer sees her daughter after school during the week and on weekends. They're inseparable. They listen to Angelique’s favorite country song, watch TV and talk about school and favorite foods — hamburgers.

Greer wasn’t able to see Angelique at all while she was locked up. It was too far of a drive for her husband, and he was facing charges of his own. But they wrote, talked on the phone and just waited until Greer got home.

Being close to her daughter again is what motivates Greer to stay clean and out of trouble. "I'm done," Greer says about drugs. "Every time, you know, [when] she cuddles up to me in the bed [and says], 'Mama rub my back, scratch my back,' [I think to myself], I can't do that if I'm in prison. I can't do that if I'm away from her. I don't want someone else to step in and do that when it should be me."

Greer is open with her 8-year-old daughter about her struggle with addiction — she thinks it will help keep her on track. “For a long time, I wouldn't tell her. But now I tell her because you know, I want her to know I will not lie to her and I want her to know that if you mess with the drugs, it could ruin your life and it could send you to prison.”

In the just over a month since Greer has been out of prison, she’s managed to stay clean and started fixing up her grandmother's house. And, she just started working in the housekeeping department at the Holiday Inn Express — a huge relief and a small step toward a better future.