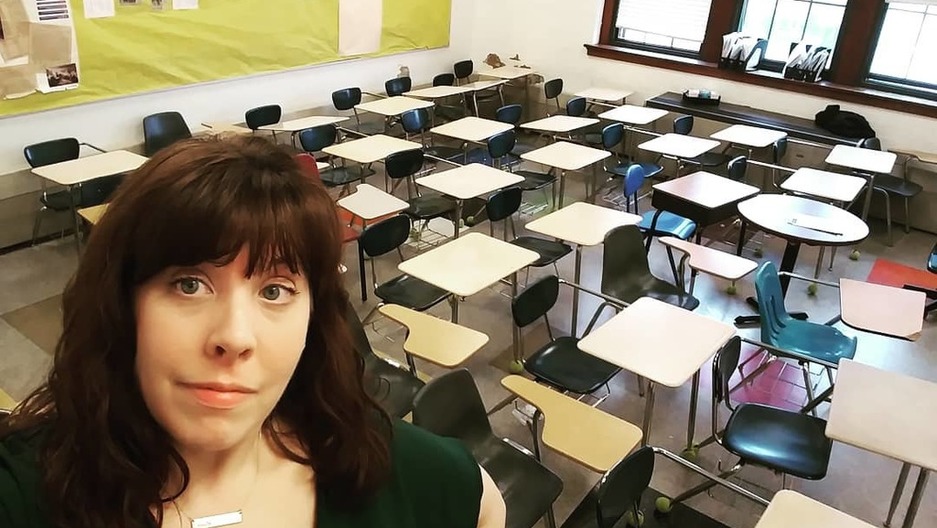 Suzanne Sutton, an English teacher at Classen School of Advanced Studies  in Oklahoma City, poses for a selfie in her empty classroom, which holds 35 to 40 students each class period. Sutton has been striking for more state funding for school supplies, replacement textbooks and higher pay.

That type of dismissal of teachers’ requests is exactly what forced Oklahoma educators out of their classrooms and into the streets. On April 2, teachers from around the state skipped class to call for more reliable funding mechanisms for schools, in addition to higher salaries and more money for student textbooks, electives and school supplies. The strike is now in its second week.

Suzanne Sutton, an English teacher in Oklahoma City, laughed, then sighed when she heard Fallin’s comments. For her, a better car was a necessity — one she could hardly afford with her $36,000 salary.

Sutton, 36, has been a teacher for 12 years, the past four at a magnet school. She began driving a used Honda Accord in 2008, but within a few years the car became an endless pit of repairs and maintenance costs. So she decided to splurge on a used Nissan Juke.

“It had been a really reliable car, but the mileage was getting too high,” she said. “There’s no way I’d be able to get a new, new car.”

Sutton, left, has joined thousands of teachers across Oklahoma in striking for more education financing.

Sutton’s finances provide a glimpse into what it means to be a teacher in Oklahoma, where starting salaries range from $32,000 to $46,000 depending on location and level of expertise. Nationally, public school teachers make on average upwards of $58,000, according to the National Education Association.

Oklahoma teachers have dealt with the tight state education budget and low salaries in different ways. Sutton watches her money carefully and works a second job to make ends meet. Meanwhile, Shawn Sheehan, who was named Oklahoma’s 2016 Teacher of the Year, felt he had no choice but to move across state lines to Texas for better pay.

Sutton has pulled off minor budgetary miracles every year since her first stint at rural Hinton High School. For that gig, she moved in with her brother to save on housing costs. Shuffling car repairs, credit card bills, and retirement contributions became a precarious but familiar ritual.

Nevertheless, Sutton has always come out on top. “I can live comfortably. I am not an extravagant person,” she said.

Sutton chips at her expenses by working a part-time job after school at a custom gift store. She has about $30,000 left to pay back from her undergraduate and master's degree loans, and she estimates she'll finish making payments in her 50s. A careful $50 per month is reserved for her savings account.

Sutton also routinely spends more than $500 from her own paycheck every year on classroom supplies, filling a void left by years of underfunding.

“Especially the past few years, I’ve really been curating that classroom library,” Sutton explains. “When you see something, you grab it. That’s just a teacher instinct.”

The way the legislature has pulled the state’s budgetary strings — slashing government spending to offset tax breaks for oil and gas producers — has imbued Sutton with a sense of resistance. She has rallied at the Capitol since the strike began last week.

“We do deserve more. Not just respect, but pay and compensation,” she said. “It’s all about funding for our students. Our students are suffering. They’re not being prepared the way they should be.”

Last week, Fallin signed the state’s first comprehensive pay raise for public school support staff in more than a decade. The measure also provided an additional $50 million in funding for school budgets. (Teachers had asked for $200 million.) The action came on the heels of a $6,100 pay bump for teachers that passed the week before. But that wasn't enough, and the teachers have continued protesting.

Recently, some teachers, such as Sheehan, the Oklahoma Department of Education's 2016 Teacher of The Year, have left the state. Vox estimates that last year, a quarter of Oklahoma’s teaching force defected to another state or left the profession altogether.

Sheehan was a math instructor at a high school in Norman, Oklahoma’s third-largest city, for six years. Decamping to Lewisville, Texas, to accept another teaching gig, he said, “was the hardest thing that I’ve done to date.”

“We were vested in that community. We swore we were going to retire as educators at Norman High School,” he said. “I knocked on thousands of doors speaking to voters about issues beyond public education. I created a nonprofit to address teacher recruitment and retention.”

As the accolades and attention piled up, Sheehan embarked on a brief but failed run for state office as an independent, challenging Republican Senator Rob Standrige.

His quest to transform the institution from the inside derailed, Sheehan soon faced another challenge: the birth of his daughter. Sheehan wondered how he could raise a child in Norman on a teacher’s salary: “Do we want to keep running into these same walls? Do we want to be facing four-day school weeks?”

“I met my wife at that school,” he said. “I proposed to her during a faculty meeting. We were well-rooted and invested there. But once our daughter came into the picture, as any parent will tell you, that’s a game changer.” 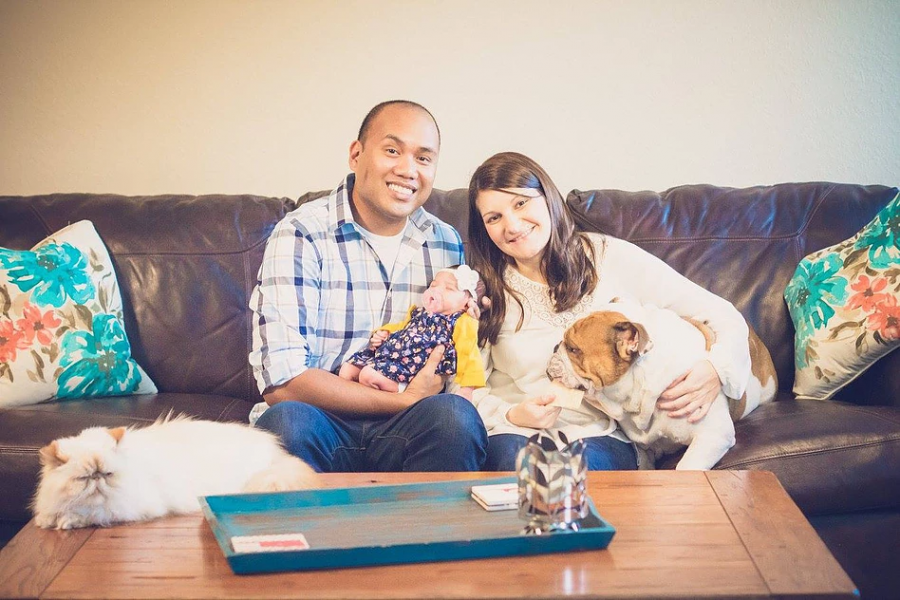 Teacher Shawn Sheehan, who was named Oklahoma's 2016 Teacher of the Year, moved to Texas in June to accept a higher-paying teaching position. He said the decision was prompted by higher salaries in Texas and the impending birth of his daughter.

In Texas, Sheehan and his wife together make $12,000 more per year than they would in Oklahoma.

“We don’t take a vow of poverty,” he said of his chosen career. “This is not missionary work. We are highly skilled individuals who should be paid livable wages.”

Faith in government officials is not high among Oklahoma’s educators. Sutton believes that, with Fallin’s final term as governor drawing to a close, “she has nothing to lose” by going after the teachers.

“She represents interests that are not for the everyday Oklahoman,” Sutton said. “I don’t think that she really understands the magnitude of the situation because her kids were private school educated.”

As Oklahoma’s army of educators carries on their campaign, it is unclear how many more concessions the Republican-dominated statehouse is prepared to make. Whatever chips the congressmen play may resonate beyond state lines, as similar teacher movements gain steam in Arizona and Kentucky. Regardless, one phenomenon from these strikes is undeniable: Teachers have found their voices and bargaining power.

“I never thought I’d see something like this,” Sutton said. “I’m glad to be a part of it, and I’m glad to be working for the interests of my students and for the future generations of Oklahoma.”