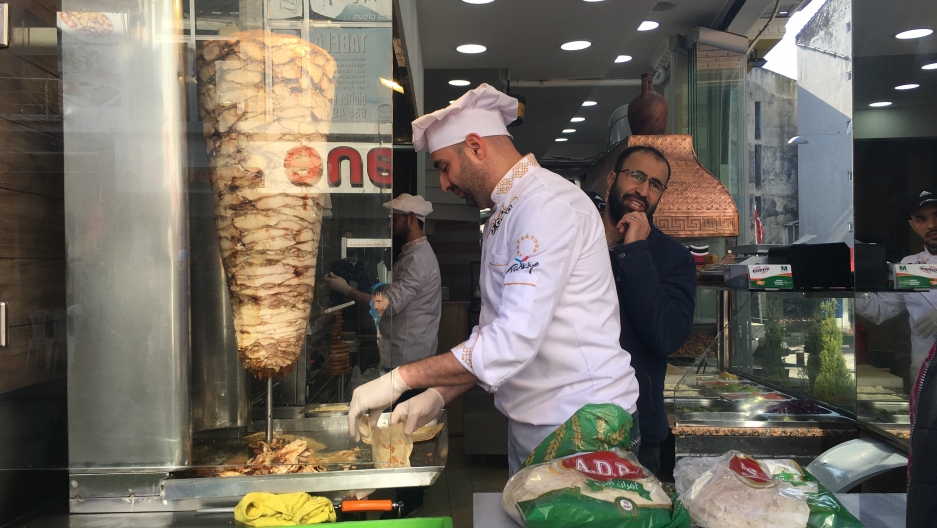 This shawarma restaurant is one of many businesses operated by Syrian refugees in Istanbul.

When “Sofia” moved to the Turkish megalopolis from Aleppo, Syria in 2012, it wasn’t supposed to be permanent. She had dreams of returning to a victorious revolution, a place where democracy and freedom reigned, instead of an autocratic regime.

But this year, as the Syrian regime captures the few opposition strongholds left in the country, the 35-year- old English teacher is realizing that the Syria of her dreams has been crushed.

Sofia, not her real name, is finalizing her Turkish citizenship. She’ll be one of 70,000 Syrians eligible to become Turkish, according to Turkish media reports. Most of them will become dual citizens of Syria and Turkey.

“I have decided to get the Turkish citizenship because I want to have another place in case I could not go back to Syria for any reason,” she says.

Turkey shares a 511-mile border with Syria, where it’s building a wall to control the flow of people crossing. About 3 million Syrians have fled to Turkey since the war began in 2011. The majority of them settled in the cities. The Turkish government and the United Nations gave many of them temporary refugee status with the hope that most of them would go back.

But Syrian President Bashar al Assad’s forces have seized some of the last opposition areas. Eastern Ghouta was bombed to submission. The area is under siege. Aid was blockaded from reaching civilians. And dozens of Syrians were killed in Douma over the weekend in an apparent chemical attack. Meanwhile, Turkey’s military seized Afrin from Syria’s Kurdish fighters.

For many of the Syrians in Turkey who fought in, or rooted for the opposition, the bloodshed is ending in death and destruction with no freedom. For those who didn’t make it to the West, Turkey has become home.

But the loud voices of dissent against the Syrian regime have turned into hushed criticism here. Syrians in Turkey fear the regime may ban them from returning or persecute their families if they speak against the Assad government. Sofia doesn’t feel safe sharing her real name now that the Syrian regime may seize all of Syria. Her family still lives in Aleppo, and she visits them.

Sofia takes me to a traditional Syrian restaurant playing songs from the legendary Lebanese singer Fairuz. The restaurant and its food give her a whiff of Aleppo. She says Syrians protested for political freedom.

“Politically, we were zero. Nobody goes to do voting. I have never, ever went to a place to vote for anyone,” Sofia says in a frank manner. “We know that we will be with Assad and his father and his grandson, and this is something that we cannot negotiate.”

Before she moved to Istanbul, Sofia was working with an aid organization in Aleppo, trying to remain neutral. But when the uprising began in 2011, so did the regime’s violence. University women in a dorm near Sofia’s house became targets. She sighs and pauses as she recalls the event.

“I still remember that day. It was very bad. I was in my house. And then they start to bomb that place, you know, the dorms. And we heard the women … they let them go out without their nightgowns, the women were shouting and crying. When I saw that that day, I said, 'I cannot feel safe as a woman here.'”

Sofia wanted to move to Turkey to study. Her father didn’t want her to leave, but her mother supported her. In 2012, she braved the trail to Turkey without her family. Once in Istanbul, her most useful skill was speaking English. She felt lost and lonely at first but she used her English to scout for a job and quickly found a teaching position at a Turkish school. She rented an apartment, learned Turkish, began dating, and a new life.

But the violence followed her to Istanbul. In January 2016, a Syrian suicide bomber connected to ISIS killed 11 tourists. In response, Sofia organized a trip for women to the city's tourist area. Istanbul's tourism had dropped drastically after the attack. Her idea was to help Turkish shopkeepers recover lost business. She felt guilty that Turks were bearing the burden of the Syrian war. But the trip failed to attract interest.

Sofia sometimes feels the sting of discrimination in Turkey.

“At the beginning, Turkish people were really feeling sympathy for us, and they were really helping us,” she says.

But as the number of Syrians grew and the future of Syria appeared grim, Turkish attitudes changed.

“The Turkish people from time to time give me a word that will hurt my feelings. They said, like, 'Syrians are getting our beaches dirty.' I really like Turkey [but] sometimes, I feel like I’m not home,” Sofia says, hesitant to criticize her new country.

Sofia tried to carry on a peaceful existence. But she couldn’t stop thinking of her family. Her sister barely survived a bombing in her Aleppo university. They suffered through the siege in 2016, when the regime took control of the city. Despite the dangers, Sofia returned home by flying to Beirut, Lebanon, then cabbing it to Aleppo. The destruction Sofia saw shook her.

“This year, I went to the part where they evacuated the people. I felt very sad. It was empty,” she says, then lets out a deep breath. “All the places were knocked down. You can see dust everywhere. Even my grandfather, he has like a 100-year-old, three-floor shop, and it was really knocked down.”

But Sofia is lucky to have even been able to return; other Syrians living in exile don't have the option of going home.

Bahaa Dabbagh, a Syrian engineer who was active in the opposition, is here to stay. The 28-year-old has lost many friends and fears for his life. He volunteers with Istanbul and I, a nonprofit that helps other refugees. For Dabbagh, the war may be ending, but the revolution will carry on.

“Revolution is an idea and you can never kill an idea. And we hope that we can do it in the right way. The wrong way was to depend on international aid. That made us more divided because everyone was working on their own agenda,” he says.

Dabbagh’s refusal to kowtow to the regime is shared by Shaza Barakat, an educator visiting from Syria. She says every foreign military power should leave the country. Syrians can eventually defeat Assad if he has no outside help.

“We cannot give up. Our children deserve to live in a free country,” Barakat says with uncontained emotion. Shaza can’t hold back the tears as she swears to continue fighting the revolution.

Barakat, a manager at an education institute, is here just for a week before returning to Idlib, the last bastion of the opposition. The Barakats are a well- known family who have opposed the Syrian regime for 40 years. And they have lost many family members. Shaza Barakat’s 16-year-old son was killed in the war, and last September, her sister, Orouba Barakat, and her Syrian-American niece, Hala Barakat, were murdered in their home in Istanbul. The Barakats believe the Syrian regime was involved in their killings, but Turkey has convicted one of their distant cousins and sentenced him to life in prison.

For Sofia, losing the war is depressing, but life has to go on. She will continue to visit her family every year. Becoming Turkish won’t make her less Syrian, she says. It just gives her a safety net in a volatile time of conflict and closed borders.

“If it were just Syrians, we would solve it. Syrians know that America and Russia don’t want to help. They just want to bomb and sell more weapons. Just leave us alone. We will rebuild (Syria),” she says, echoing a commonly held sentiment among the Syrian community in Turkey.