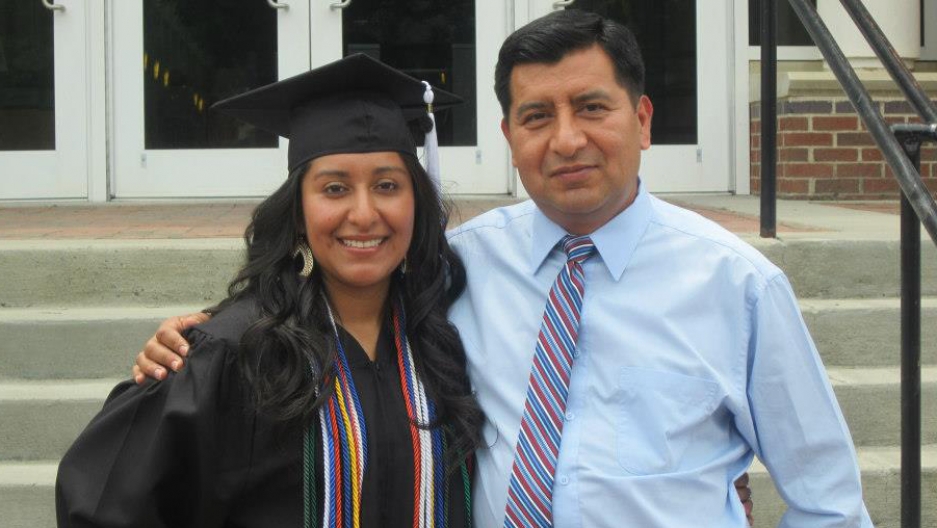 Belsy Garcia Manrique with her father at her 2013 college graduation from Mercer University in Macon, Georgia.

“Me van a djar detenido, mija. Sigue adelante, mija. Tu puedes.” They are going to detain me, my child. Keep going, my child. You can do it.

The day they took him was Jan. 23, 2018. My dad, Felix Garcia, has had to check in with Immigration and Customs Enforcement (ICE) since 2011. Of course, we always knew there was a risk that he could be detained at any check-in. So you prepare yourself mentally, but you’re always hoping it’s never going to happen.

This time around, our fears were even worse because we heard rumors that immigration officials were basically taking everyone who showed up, regardless of their criminal background. Normally my two sisters or I would go with him and stay with him until he was released. But this time, they did not allow my younger sisters into the building.

I was at home in Chicago that day, as I didn’t have any clinical duties at the hospital. I was waiting by my phone, hoping to receive a call from him saying, “Hey, everything is fine.” But I was worried and couldn’t focus on studying, so I was just sitting there. And then I get the text from him: “Me van a djar detenido, mija.”

That’s when the tears came, when your biggest fears become a reality. I was crying for a while. Then I had to compose myself, call my mom to see how she was doing and call my sisters. I couldn’t say anything to my youngest sister. I couldn’t console her in any way. We always knew this was a risk. What is there to do?

We’re a mixed immigration-status family. I am at the end of my third year of medical school at Loyola University Chicago Stritch School of Medicine and have temporary protection under the Deferred Action for Childhood Arrivals (DACA) program. My middle sister has a green card because she is married to a US citizen. My younger sister is a US citizen because she was born here. She is 19 years old and a sophomore in college.

Follow: We're keeping up with Julio Ramos, another medical student, as he navigates his life in the Trump administration.

My dad comes from San Marcos, Guatemala. He came to the US because he had been getting anonymous notes from people telling him to stop what he was doing. While getting his accounting diploma, he was president of a student association and began raising questions about the political climate and saying people should learn to think for themselves. That didn’t suit some people, and they were threatening to kill him. Once, he was assaulted: a couple of men beat him up. When he got out of the hospital he went to the authorities, but they did nothing because he didn’t have names. He was scared for his life.

In 1995 he arrived in the US. He filed for asylum in 1997 but his application was denied. He didn’t have a lawyer. He didn’t have a Spanish interpreter during the court proceedings either. He didn’t know he could appeal, so he didn’t appeal. Not understanding that changed his case. If he had appealed, maybe this story would be totally different.

I arrived in the US in 1997 with my mom and younger sister. We crossed the Rio Grande River. They put me on a floating tire and pulled me across. And I just remember knowing I was making my way to see my daddy because I hadn’t seen him in two years.

Growing up in Georgia, we didn’t have insurance, so we couldn’t go to the doctor very often. There’d be times we would go and none of the doctors spoke Spanish, so either my dad translated or I translated. My dad always pushed me to help others, because he always did the same. We were always taking people into our house if we had an extra room or extra food. I saw how selfless my dad was and how he was willing to share anything he had. He was always saying, “We came to this country for a better future and better opportunities. Having those opportunities gives you the ability to help others.”

Those values instilled in me by him have taught me to be a kind human being. And that’s what I want to do as a family physician. I want to work in underserved areas and help those who need it the most. As physicians, it’s important to treat everyone regardless of race, religion, background and even immigration status.

My dad has always been extremely driven. He’s owned a trucking company, and when I was in high school he owned a tortilla company. Recently he’s taken an interest in buying foreclosed homes around Calhoun, Georgia, remodeling them and selling them. He buys the land, hires contractors and construction workers and gets building permits. He’s creating jobs and generating revenue for the city.

Throughout this whole ordeal, my dad has constantly told me and my sisters that he has learned a lot from this country. He loves this country and sees it as his home. He’s thankful for all the opportunities he’s able to have been a part of. He’s even said he’d fight for this country. And he doesn’t want to leave.

When I told my dad I wanted to go to medical school, I was expecting some hesitation from him. We knew that as a family we’d undergo some financial strain for me to attend undergraduate studies because, being undocumented at the time, I couldn’t receive financial aid. But he never showed any hesitation. He said, “Ok, let’s do this.” 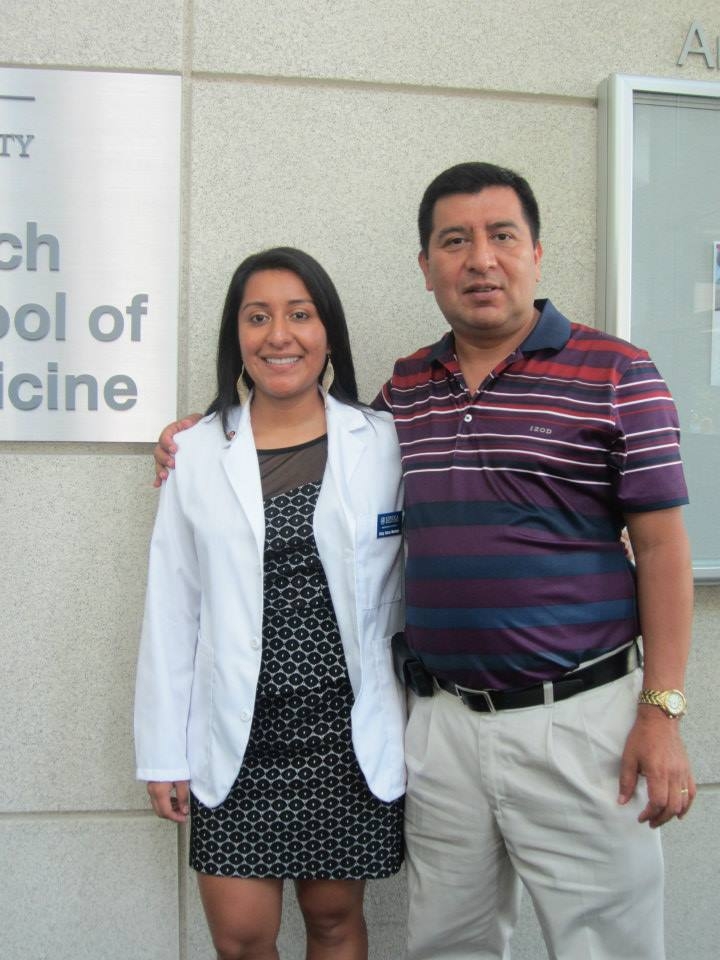 Belsy Garcia Manrique with her father at her white coat ceremony at Loyola Stritch.

There have certainly been times when I would doubt myself or thought I wasn’t good enough. I thought the chances of getting into medical school were extremely thin because of my legal status, so why even try? But he was always in my corner, pushing me. With his support, I managed to make it this far. Right now, I just started my clinical rotations at the Veterans Administration Hospital outside Chicago. I follow up on veterans who are hospitalized for any psychiatric issue and monitor them on a day-to-day basis.

My DACA work permit is until 2020. Currently, I cannot get a green card or become a US citizen. DACA is a band-aid, not a permanent solution. Immigration reform has to happen. The spotlight has been on "Dreamers," and that’s great, but there are millions of other people who also deserve the opportunity to become legal permanent residents. They pay their taxes and they don’t have a criminal record, similar to my father. You also hear a lot of, “Dreamers are okay to stay, but we need to blame their parents for bringing them here illegally.” That is wrong. Those parents — my parents — wanted a better future for their children. Every parent should want that.

The political climate has affected us in a very tangible way: We’re being separated. I’m losing my father, and I don’t know when I’ll be able to get him back. Regardless of everything that’s going on, America is where I want to practice medicine and work toward a positive impact. Because I grew up here. And I’m going to continue seizing the opportunities that present themselves because of the sacrifices my dad has made for me, for my sisters. I’m not going to let that go in vain, especially with everything he’s going through right now.

When I was home for Christmas break, we talked about the fact that maybe it would be the last time we were going to be together as a family. We started to prepare ourselves. We changed the titles on our cars from my dad’s name to my name, to be able to sell them if we needed to. We changed our bills and put them under my name or my sisters’ names. I have a power of attorney saying my dad gives me permission to do what I think is necessary with the property. Currently, we don’t have a breadwinner: both my sisters are in school, I’m in school — and I’m actually getting into more debt with medical school loans. Now I’m responsible for the mortgage. We had to think about all those things.

I went to see my dad last week at Stewart Detention Center in Lumpkin, Georgia. It was the first time I’d seen him since New Year’s Day. It was extremely hard because I only got to see him through a glass window and I talked to him through a phone. I couldn’t hug him. He was dressed in a jumpsuit. He has lost weight. He’s not as kept as he was. It was strange seeing him. He’s being treated like a criminal. Which frustrates me because he’s not.

But my dad is always proactive in helping others even when he has little to give, even while in the detention center. We put money in his account and sometimes he’ll let other detainees use his account to call their families because they were the breadwinners and their families can’t afford it. He finds ways of helping others that I couldn’t imagine. He’s had me look up shelters because men he’s met in detention were going to be released and they had nowhere to go. It’s those little things that really make a huge impact on me. Because whatever situation you might find yourself in, there’s always ways of helping others.

The current political climate is not the best for immigrants. Lawyers are constantly telling me this is a trend they have seen for the past several months: People who were not previously targets for deportation — because they had no criminal record, because they were not risks to the community — have become targets. I guess there must be some political gain from this, and that’s the sad thing. Unfortunately, changes in the law have an effect on thousands of families. They’re tearing us apart. I don’t know when will be the next time I will be able to hug my father.

We’ve been asking ICE to allow my dad to stay here for at least another year until I graduate next May. We filed for a stay of removal, but it was denied. So on April 4, he will be getting on a plane to Guatemala. One half of me will be with my dad, but the other half I need to focus on my education because I made it this far.

My dad told me when I went to see him in detention, “If you graduate with your degree, I will be happy. Everything I’m going through and suffering right now, I would do it all over again for you.”

Editor's note: Felix Garcia applied for another stay of removal so his deportation was postponed and he remained in detention. But later in April, Garcia’s stay was denied and he was deported to Guatemala.

This essay was adapted from an interview with Belsy Garcia Manrique conducted by journalist Tania Karas. It originally appeared on Refugees Deeply. You can find the original here. For important news about the global migration crisis, you can sign up to the Refugees email list.