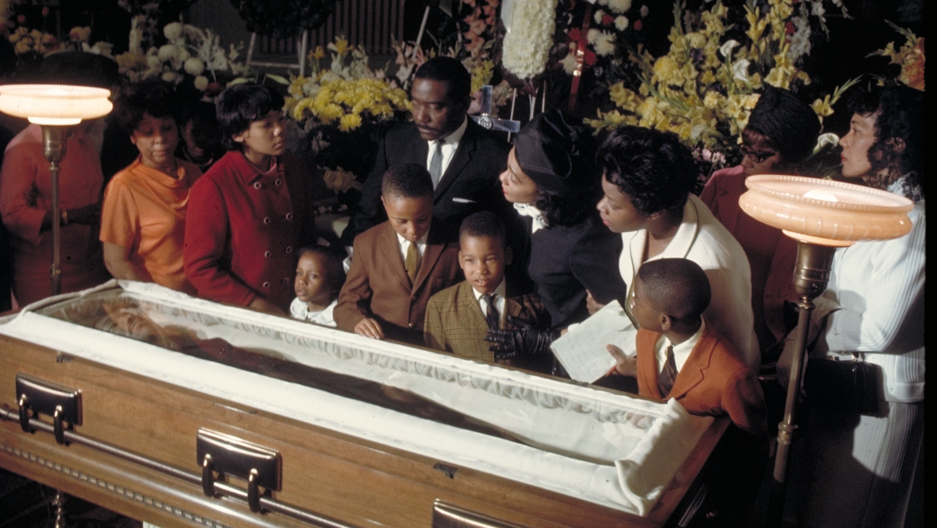 Coretta Scott King and her children viewing King’s casket. The church was filled with hundreds of people, including labor leaders, foreign dignitaries, entertainment and sports figures and leaders from numerous faiths. The service began with Rev. Ralph Abernathy delivering a sermon which called King’s death "one of the darkest hours of mankind."

As the 50th anniversary of Dr. Martin Luther King Jr.’s death is reached, the photos of Flip Schulke highlight the anguish of those who attended the funeral a few days after the legendary civil rights leader was killed April 4, 1968.

Through his close friendship with King, Schulke became known as one of the leading chroniclers of the civil rights movement and King’s involvement in it. Schulke’s photography throughout the funeral brought to a close his coverage of both a friend and American legend.

“These images are the evidence of a specific historical moment and yet they have a timelessness to them as well; they communicate a sadness and a loss we can relate to, not just as historians, but as human beings,” says Ben Wright at the Dolph Briscoe Center for American History at the University of Texas at Austin that houses Schulke’s archive. “Photography was important in galvanizing public opinion in favor of civil rights at the time, but now they also play a vital role in keeping the movement’s heritage vibrant.”

King died from a gunshot at the Lorraine Motel in Memphis, Tennessee, where he was supporting a strike by local sanitation workers.

“The bullet knocked him out of his shoes,” says Andrew Young, one of King’s closest aides at the time and a former US ambassador to the United Nations. “I saw the bullet had entered the tip of his chin and went straight to his spinal cord. I guess I realized that he never heard the shot and probably never felt it.”

Fifty years on, many in America argue that the lessons taught by King have failed to be heeded, and that a combination of cynicism, greed, amoral politics and misplaced loyalties are driving back the dream he had for people of all races.

“Dr. King said: ‘There’s nothing more dangerous in all the world than sincere ignorance and conscientious stupidity,’” Young says. “He was talking about Vietnam but it certainly applies to almost everything going on today.” 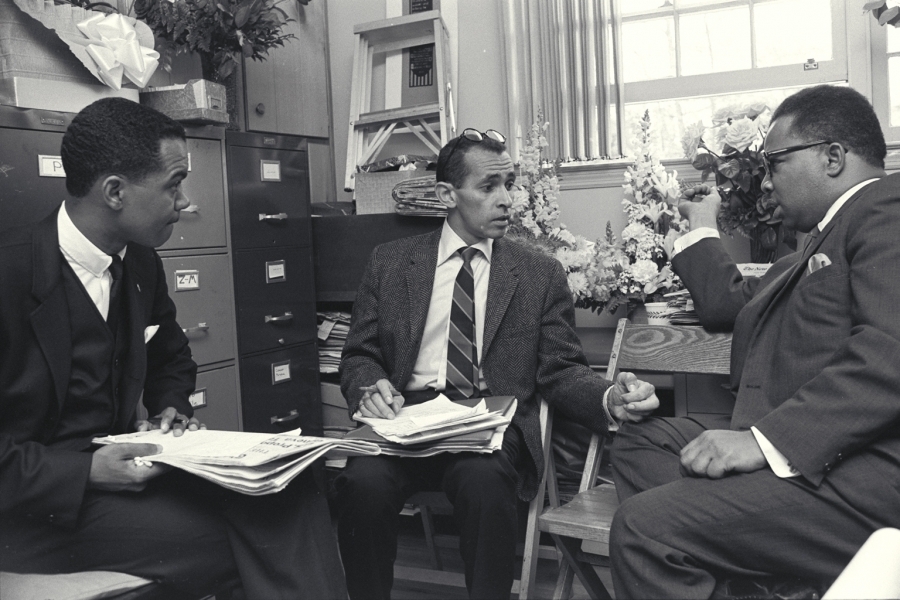 The funeral of Dr. Martin Luther King Jr. being planned by Wyatt Tee Walker (center), King’s chief of staff, and Albert D. King (right), his brother. After the shooting in Memphis, King was taken by ambulance to the emergency room at St. Joseph's Hospital where he was pronounced dead at 7:05 p.m. King's closest aides contacted local funeral director Robert Lewis Jr. to collect his body and prepare it for viewing. “Dr. King constantly prepared us for his death,” Young says. “He said, ‘I know my days are numbered.’”

Related: 50 years ago, MLK spoke out against Vietnam. His words are just as relevant today.

Beginning of a bleak day 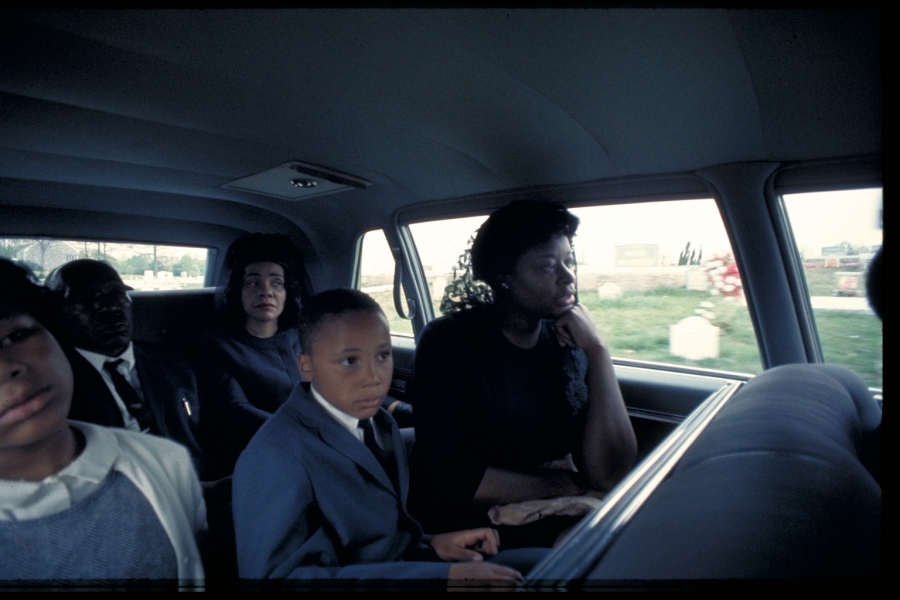 King’s widow, Coretta Scott King, sat at the far rear corner, with their children and other family on route to the first of two funeral services held on April 9, 1968, in Atlanta, Georgia. The first was for family, close friends and other invitees at Ebenezer Baptist Church, where King and his father served as senior pastors. This was followed by a three-mile procession to Morehouse College — King's alma mater — for a second, and public, service.

Related: To one Jewish professor, Martin Luther King Jr. was a mensch 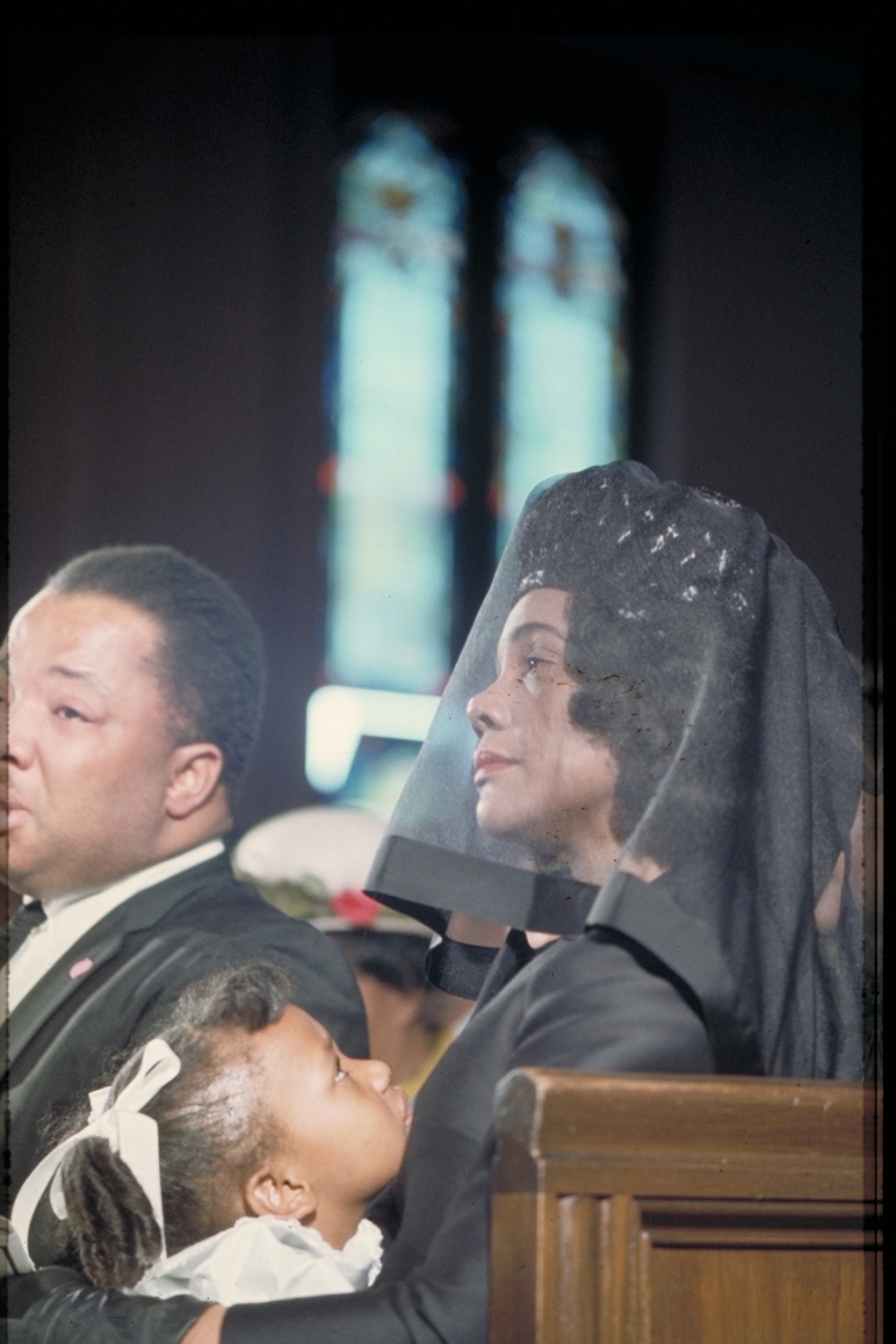 Coretta Scott King and daughter Bernice sit next to Albert D. King during the funeral service at Ebenezer Baptist Church. In addition to sorrow, America was left stunned and angered. President Lyndon B. Johnson on April 7 declared a national day of mourning for the lost civil rights leader. Meanwhile, deadly riots occurred in a number of African American communities in cities between the assassination and funeral. 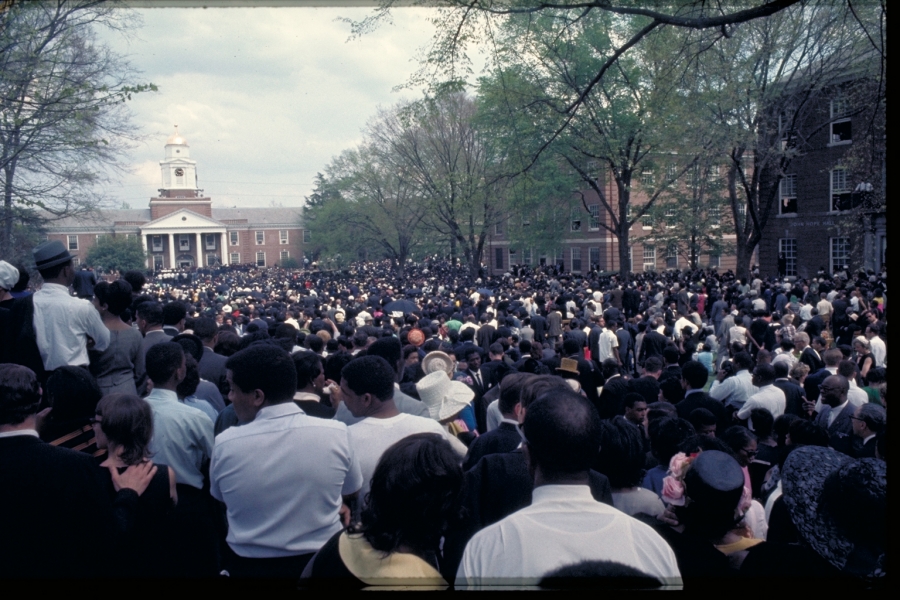 The procession from Ebenezer Baptist Church to Morehouse College was observed by more than 100,000 people. Its silence was occasionally broken by the singing of freedom songs that had been sung during previous civil rights marches in which King participated. “We must learn to live together as brothers or together we will be forced to perish as fools,” King wrote in his last book published before his death. At the open-air service at the college, per King's request, his good friend Mahalia Jackson sang his favorite hymn, "Take My Hand, Precious Lord.”

Related: Remembering Martin Luther King and the March on Washington

Passing through the veil of tears 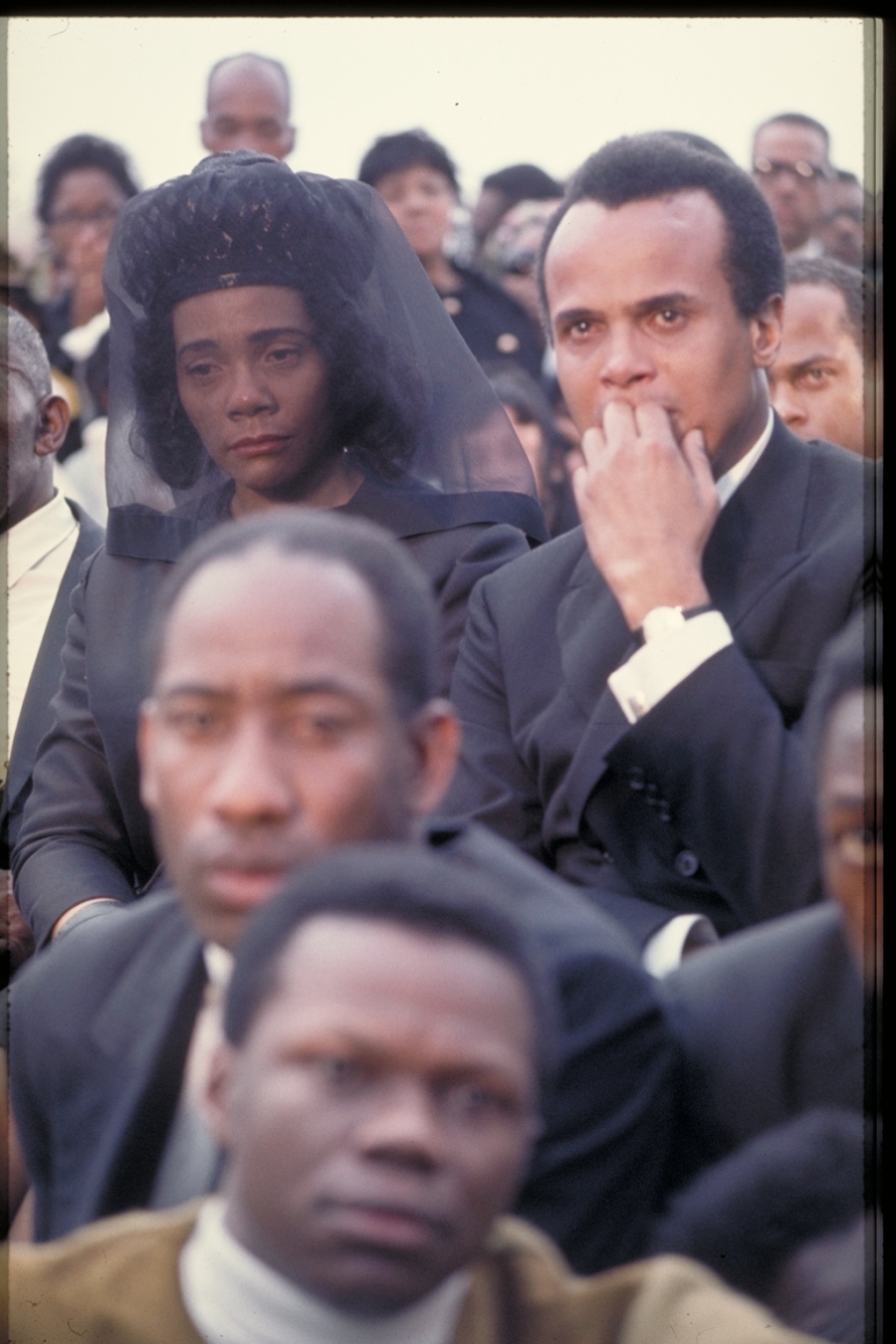 Coretta Scott King sits beside Harry Belafonte, the American singer, actor and social activist. Following the public service, King's casket was taken by hearse to his final burial place at South View Cemetery. “I’m realistic enough to know that I can meet a violent end,” King said before his death. “I live every day with the threat of death. But I don’t think the important thing is how long you live but how well you live, and I’m not concerned about my longevity or the quantity of my life but the quality of my life.” 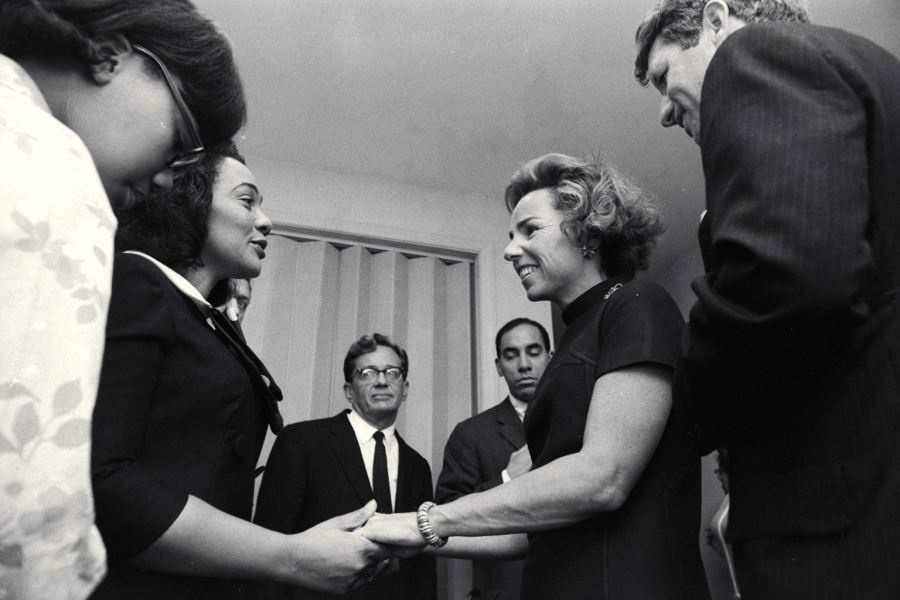 Coretta Scott King greets Ethel Kennedy and Senator Robert Kennedy. Like King, Robert Kennedy was emerging as an icon of American liberalism, and the two men had gotten to know each other. After King’s shooting, Kennedy arranged for a plane to fly Coretta Scott King to Memphis the following morning. Kennedy was also emerging as a major contender for the Democratic nomination for US president. But less than two months after King’s funeral, Kennedy was shot shortly after winning the California presidential primaries. He died the next day while hospitalized. “The truly visionary moral voices of our society were silenced,” Young says. “I think that the rational liberal democratic socialist view of the world, from Franklin Roosevelt all the way to Lyndon Johnson, was really cut short by the assassinations of Martin Luther King and Robert Kennedy.” 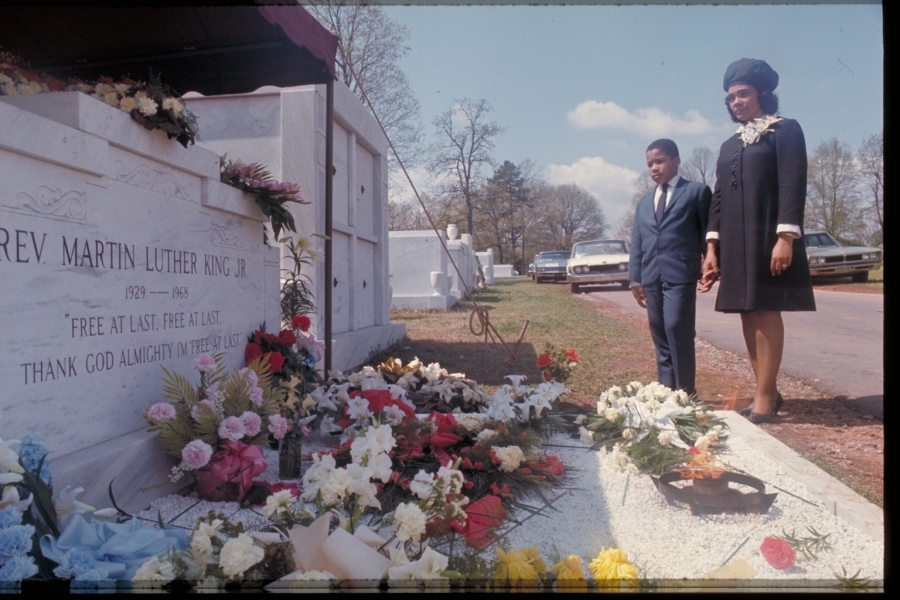 Following the public service, King's casket was taken by hearse to his final burial place at South View Cemetery. Here Coretta Scott King and her son visit King’s gravesite on the first anniversary of his assassination. King’s remains were exhumed in 1977 and reburied at their current location in the plaza between the King Center and Ebenezer Baptist church. His widow was buried next to him in 2006. “The Civil Rights Movement transformed the United States — there have been all these benefits,” says Taylor Branch, author of a trilogy on King. “And yet appreciation for the movement has faded in this cynical political era. I think of not just Dr. King but the whole movement as like the modern Founding Fathers, in the sense they were dealing with the essence of what the democratic experiment is about.“