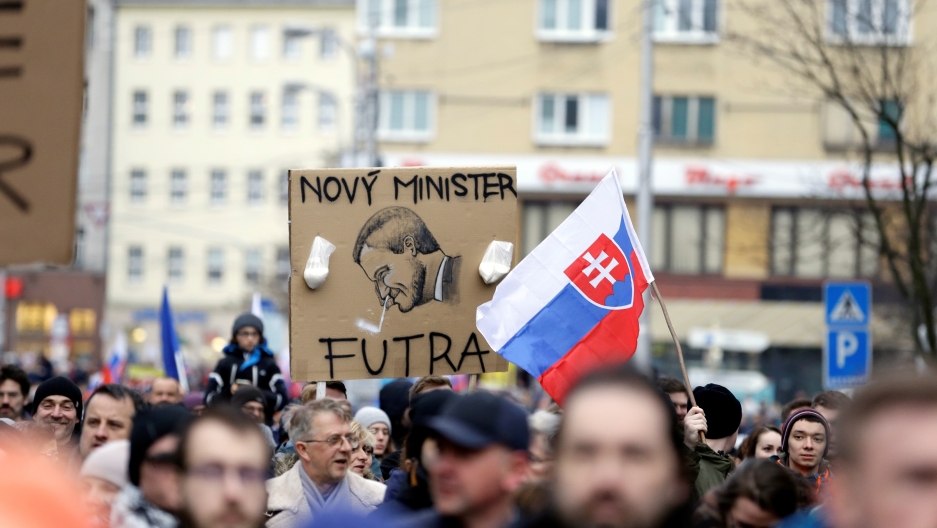 People hold up a cartoon of the new Slovak Prime Minister Peter Pellegrini during a march in reaction to the murder of Slovak investigative reporter Ján Kuciak and his fiancee Martina Kušnírová, in Bratislava, Slovakia, March 23, 2018.

Many residents of the Central European republic of Slovakia consider corruption at the top levels of government a long-standing part of their political system. But the recent killing of a journalist investigating possible misuse of European Union funds — and a subsequent shakeup in the country's leadership — are raising concerns the system may be more corrupt than previously thought.

Journalist Ján Kuciak had been looking into the alleged theft of EU funds by the ruling left-wing populist Smer party with alleged connections to the Italian mafia. In February, he and his fiancee, Martina Kušnírová, were shot dead in their home. Thousands took to the streets and ultimately forced former Prime Minister Robert Fico and his interior minister, Robert Kalinak, from office. There have been no arrests for the murders so far.

But the protests exposed deep fault lines in the former Soviet satellite country where money and politics have created a toxic brew as the country struggles to move past economic and political corruption. Meanwhile, the nation's post-Soviet counterparts — Hungary, Poland and the Czech Republic — are embracing nationalist values and euroskepticism. Slovaks are left pondering an identity crisis that has been brewing beneath the surface for years.

Peter Kunder, director of the Fair-Play Alliance in Bratislava, a nonprofit political watchdog organization, says the journalists' murders forced a national reckoning with a secret everyone knew.

“It was an open secret that a lot the European Union funds meant for development weren’t, diplomatically said, used in very effective ways, and there wasn’t any oversight to this spending,” Kunder says. “We saw there was a lot of corruption, and these corruption cases never went anywhere.”

Related: The populist tide has spread to one of Europe's last liberal democracies 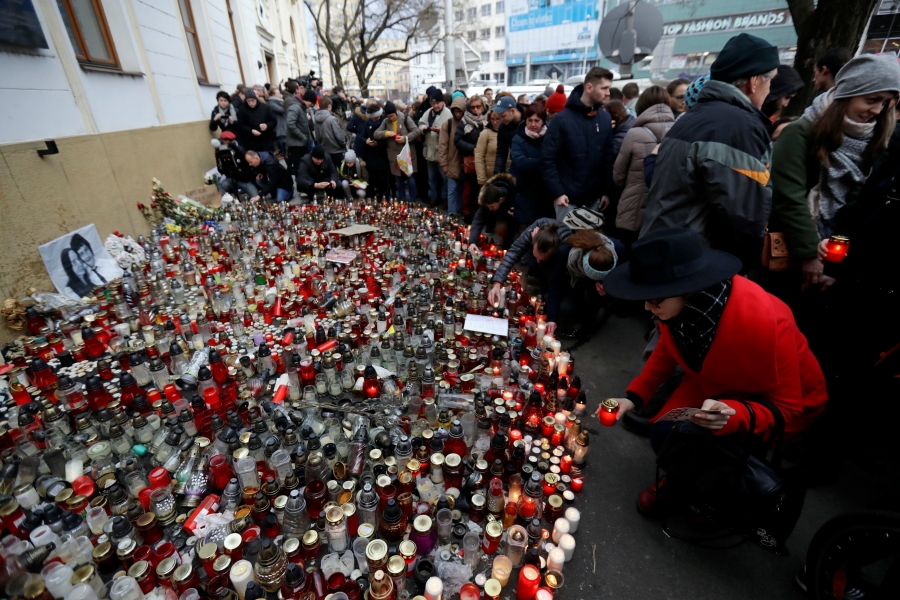 People light candles during a march in reaction to the murder of Slovak investigative reporter Ján Kuciak and his fiancee Martina Kušnírová, in Bratislava, Slovakia March 23, 2018.

With the help of these EU funds, Slovakia has come a long way since it emerged from the Iron Curtain in 1989. At that time, it was still a part of the former Czechoslovakia. It separated from the Czech Republic in 1993 to become an independent country.

When Slovakia joined the European Union in 2004, member countries saw they needed to invest money to raise the quality of life in Slovakia and other countries that had languished under Communism. The EU invested billions to bring living standards closer to those of capitalist Western Europe.

“Now, when you would go and travel around Slovakia, you will actually see better highways than that in some parts of Western Europe,” says Michal Vašečka, a sociologist and director of the Bratislava Policy Institute.

The country has also tied its fortunes to the automotive industry, becoming one of the biggest car manufacturers in the world. German car giant Volkswagen, the French auto conglomerate PSA, and South Korea’s Kia Motors all have production plants here.

But the introduction of EU funds were a double-edged sword. While they ushered in much-needed improvements with infrastructure and telecommunications, they also brought tempting amounts of cash. As the country privatized, Vašečka says the money brought an “unprecedented level of corruption.”

He says Slovakia has become a system of oligarchs, where a small number of people control the wealth and hold political power. Kuciak, the slain journalist, was investigating how EU funds that were supposed to be used for agriculture were possibly being misused. Vašečka says the corruption could jeopardize private investment and how much money the EU decides to allocate to Slovakia.

“Instability is threatening their [the oligarchs’] businesses, and they are behind the government,” he says.

And while the protests have calmed for now, the country remains on edge. These events come at a crucial time for the EU. Brexit means there will be less money going into the union, while political support of the bloc is waning across the continent. This corruption scandal could make other members wary of funding projects where money could be misused.

Until now, Slovakia appeared to be more pro-West than its cultural and geographic neighbors: Czech Republic, Hungary and Poland, known as the Visegrád Group. It’s the only one that adopted the euro currency and seemed to be less euroskeptic than the others. Kunder says Slovak politicians often paid lip service to wanting to be a core component of the European Union. 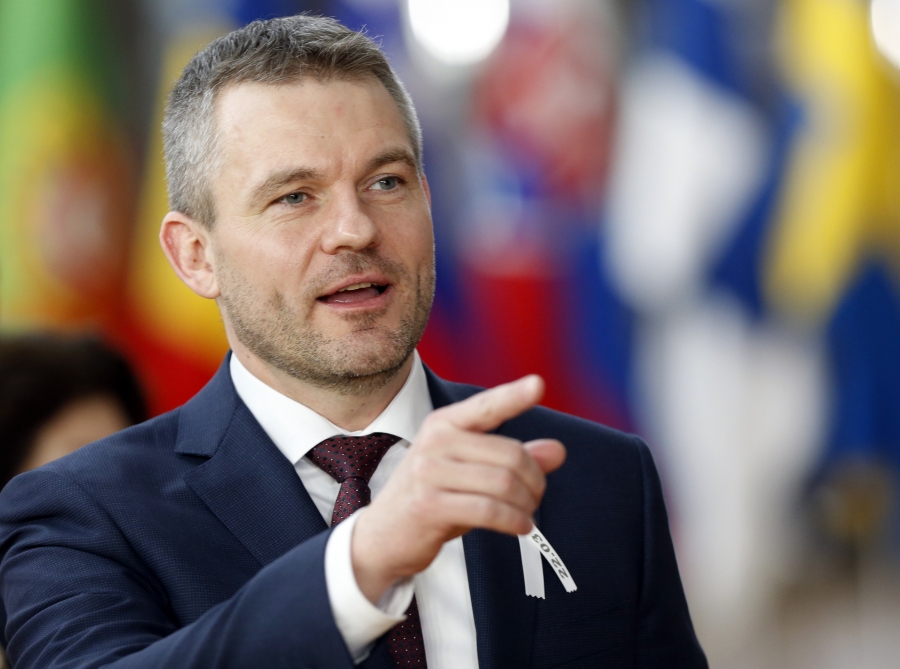 “Even though we had a nationalist party join the Slovak Parliament, the situation wasn’t as bad as it was in these other countries, and we were the exception,” Kunder says.

Hungary has seen the rise and dominance of an anti-minority, anti-immigrant far-right party; Poland has been disciplined by the European Union for eroding the independence of the judiciary; and the Czech Republic just recently re-elected a pro-Russian, anti-immigrant president.

As nationalism and populism swell in the region, Slovakia is at risk of also being swept up in similar political movements. Just last week, it was the only Visegrád country that refused to expel Russian diplomats in response to a nerve gas attack in the United Kingdom.

Jan Zilinsky, an economist from Slovakia and research associate at New York University's social media and political participation lab, says since Slovakia emerged from the clutches of communism, the road to democracy has been bumpy.

“People have started to worry that could it be the case that Slovakia will one day look more like Ukraine or Russia, and now people are demanding accountability and an independent investigation” of the two journalists' murders, he says.

The new prime minister, Peter Pellegrini, appointed a new cabinet that was eventually approved by the president. Even with these changes, students and other activists are calling for more systemic changes, including judicial and police reform. They view the current system as a threat to their democracy.

Simona Svítková, 22, who is studying in Bratislava and is from central Slovakia, attended a student demonstration on March 23. She says students will continue to ask for reform.

“We believe the state belongs to the people, and the politicians have kidnapped it, and they feel they can do whatever they want,” she says.

Some activists are calling for new elections, but Kunder worries an early vote won’t change much. He says the alternatives to the ruling Smer party don’t have clear enough policies, history or expertise to move the country past this stage of corruption. Politicians, he says, have acted for years with impunity, and the cumulative problem of cronyism and corruption won’t be solved overnight.

“You can’t solve the problem by changing 10, 20 or 30 people in the government and the system will magically change again,” Kunder says.

Related: After the UK, which nations are most vulnerable to an anti-EU revolt?

But it’s not clear where the reform movement will go next. Kunder says it will be hard to get rid of the corruption that allowed the misuse of the EU funds.

“[Corruption is] deep in the culture and the political system is a mirror of that,” he says. “It’s very common to cheat on school exams, and it’s not considered shameful. You’re the exception if you don’t. Small businesses always work out deals to avoid taxes. ”

He says this way of thinking is a remnant of the country’s Communist history, when the country was poor and people learned to cheat the system to get ahead. But despite the overall higher standard of living, some are frustrated with their economic situation. Like in many post-Communist countries, there’s a nostalgia for a time when the government was a safety for basic needs.

“People didn’t have much, but there was a sense of security that the state will take care of them,” he explains. “So, [now] they feel institutions are failing and the taxes they pay are being stolen.”

He says these frustrations are also fertile ground for extremist, nationalist or populist ideas. Vašečka says while he sees the younger generation being able to redirect the country — like they did to usher in the Velvet Revolution in 1989 — many young people support far-right politicians. Reports say this is driven by their lack of opportunities and that Slovak politicians aren’t doing enough to help them.

“I’m not forgetting that on the other side, 25 percent of people who voted for a fascist were young people between 18 to 24,” he says of the 2016 election.

Slovakia risks following the political path of Hungary and the Czech Republic, says Jacob Kirkegaard, a senior fellow at the Peterson Institute for International Economics, but says the quick change to government is a sign of political maturity. Slovakia’s ties to the auto industry gives the country some economic cover from this current unrest.

“Political instability is a nuisance, I would argue, but is it something that, at the current level of instability, is going to have major disruptive economic consequences? In my opinion, no,” he says.

But Vašečka says the country’s economic and political future is still fragile, and disillusionment is growing. He says that the young, educated class is leaving the country, and the brain drain could affect future development. He says young people have become extremely cynical.

“People are driving better cars thanks to prosperity on brand new highways, but they are doing it in a country that was stolen from them. You know that, in fact, they lost the hope for the future,” he says.

The next elections here are scheduled for March 2020.

“It might be a dramatic mess in the next election,” he says, “We don't know what will happen in the next two years, but we do know that the cynicism and frustration will be there.”