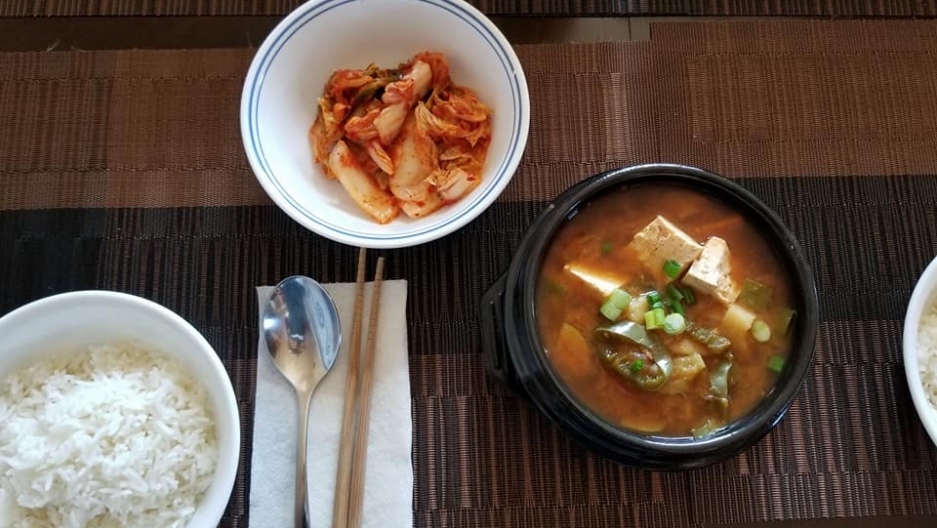 Thomas Chung runs a Facebook group of almost 4,000 members. It’s dedicated to traditional Korean cuisine, like his doenjang-jjigae, a soybean paste stew — but prepared in the wildly popular Instant Pot.

While living in Vietnam in 2010, Erin O’Brien learned to make bánh Tết, a classic dish for the Vietnamese Lunar New Year.

“It’s an all-day process,” says O’Brien, who joined a group of elderly women to make the dish in a small Vietnamese village. The process of making bánh Tết (or its cousin, the square-shaped banh chưng) typically involves the following steps: soaking rice, steaming mung beans, slicing pork, wrapping the rice and filling banana leaves, then tying them tightly with string. The banana leaf packages are then boiled in a pot of water over a fire for about 48 hours.

“There’s a guy who stays up all night and watches the fire to make sure you don’t burn down the whole village,” says O’Brien. She's a chef and artist of Vietnamese, Irish and German descent and has traveled to Vietnam many times, including once as a Fulbright scholar studying nước mắm, Vietnamese fish sauce.

In Los Angeles, O’Brien is part of the Bánh Chưng Collective, a group founded by Vietnamese American women working in the local food industry, including chefs Diep Tran and Minh Phan. They gathered for the first time in 2013 to tackle making the square shaped treat.

“The first year we made it, we were like, ‘Oh we’re so like our ancestors, you know? We’re totally channeling our people right now,’” O’Brien says. 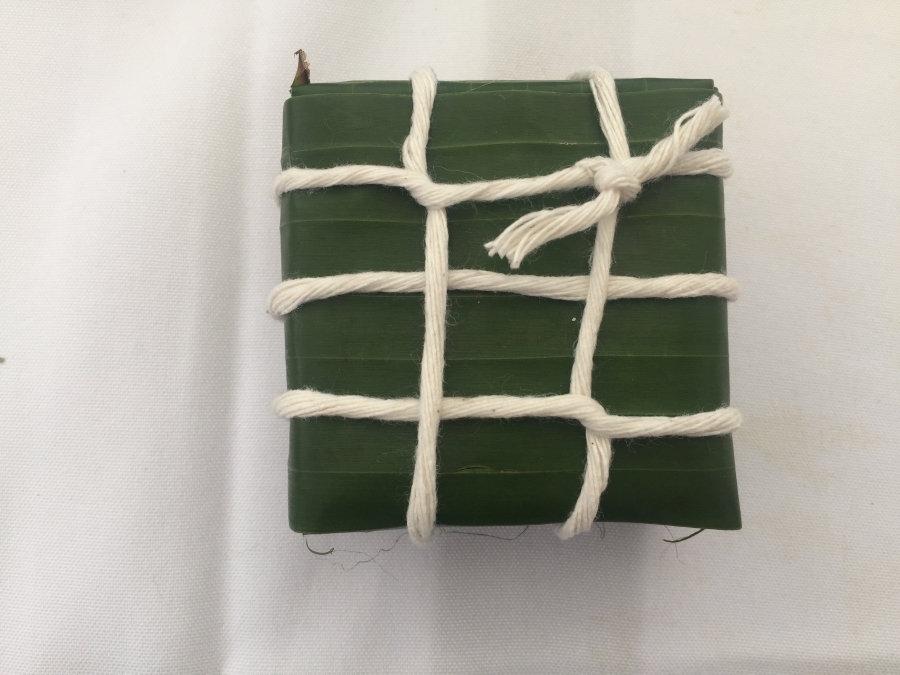 A wrapped banh chưng, made by the Bánh Chưng Collective. See what the packet looks like inside in the Global Nation Exchange discussion group on Facebook.

But the time-consuming process took its toll. Besides the tedious preparation time, O’Brien says they had to cook the cakes on bricks in an outdoor fire pit overnight. Last year, to make things a little easier, she suggested using an electric multicooker, called the Instant Pot. They vacuum-sealed the banana leaf-wrapped rice cakes with ice and cooked them in the device. O’Brien says what usually takes 48 hours, took about 45 minutes. The Instant Pot was such a game-changer that she and her friends used several Instant Pots to make bánh chưng again this year.

O’Brien learned about the Instant Pot from friends. At first, she wasn’t impressed with what seemed to be just another pressure cooker. But after getting one for herself, and learning how to properly use its features, the device changed the way she cooked.

“The thing is a miracle worker. I can throw a rack of ribs in there in less than 10 minutes,” O’Brien says. She makes a Vietnamese-style chicken poached with lime leaves — “It fits the whole chicken.” "The pressure is too high for some things,” she says, so she still likes to cook some dishes on the stovetop. But her Instant Pot has given her more than just efficient cooking options.

The Instant Pot is marketed as a 7-in-1 multicooker, but it is perhaps best known for its quick and easy-to-use electric pressure cooker function. The device reached cult status thanks to its many devotees in online community groups on Facebook, where users share tips, recipes, weight loss success stories and unexpected creations from cheesecake to dog food. The device has been a tool for home cooks to be faster, but also has given many new ways to make their own cuisines and connect with their heritage.

Thomas Chung runs a group for Korean Instant Pot recipes, which he started after seeing the surprising amount of interactions and responses on the official Instant Pot Community Facebook group.

“I saw it grow to way past a million [members] with constant posts and engagements regarding recipes and more,” he says. “I remember looking up Korean Instant Pot recipes, but not having much luck.”

Chung, who was born in Seoul, South Korea, and grew up in Santa Clara, California, started the Instant Pot Korean Recipes Facebook group, which combines his passion for cooking Korean dishes with his experience in marketing. Chung and his wife got their first Instant Pot in early 2017, after hearing about it from their friends.

Chung’s wife is Cambodian, but she loves Korean food and Chung says she encouraged him to cook more Korean cuisine as well. Starting a Facebook group dedicated to his cultural cuisine has helped him learn from talented cooks and chefs. “I just saw an opportunity and went for it, hoping it would bring about community engagement and influence,” he says.

Chung recently merged his group with another Korean-focused Instant Pot group, and it now has almost 4,000 members. Doris Cho is an active member who shares her recipes with detailed descriptions, photographs and videos. But it took her a while to learn how to cook.

“The thought of cooking scared me. I always tell people, the only thing I knew to do was boil water and put it inside my cup ramen,” she says. “But now, I’m confident and more capable as a home cook. I love transforming normal stovetop Korean recipes into my Instant Pot.” 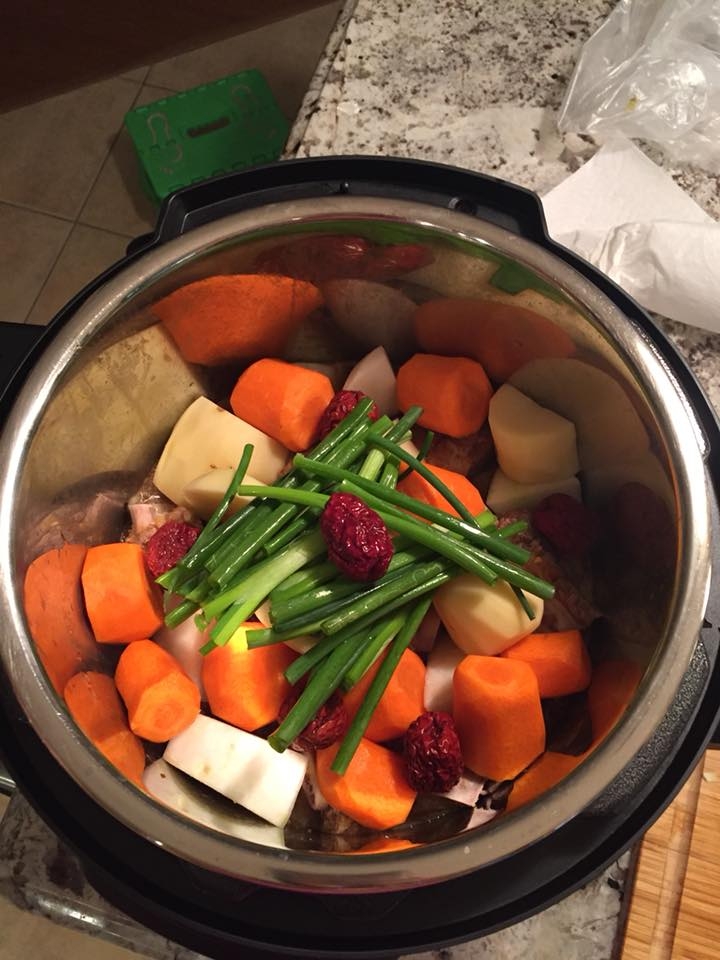 The ingredients for galbi jjim, braised short ribs, as cooked in an Instant Pot. Doris Cho shared her recipe in a Facebook group; she used to be afraid to cook.

Cho has made kimchi-jjigae (stew), bulgogi (grilled marinated beef slices), galbi jjim (braised short ribs), juk (rice porridge) and bean sprout soup. Her recipes caught the attention of Chung, who recently asked her to become an administrator for the group.

“At first, I questioned him,” she says, but later she “was actually quite honored that he recognized my passion and desire to share our cultural foods.”

Also: The savory treat of the Dragon Boat Festival and the aunties who make them

There are Instant Pot Facebook groups dedicated to various cuisines, including a group for Vietnamese recipes that has more than 56,000 members, and another for Indian food with more than 74,000 members. The official Instant Pot Community group has more than 1.3 million members and includes posts about Filipino chicken adobo, Mongolian beef and broccoli, and Mexican shredded chicken. Some dishes are traditional, but many are fusion recipes adapted for the Instant Pot.

“On average, there are about 15,000 posts in the community everyday. It’s a very hyperactive community. Not a single dull moment over there,” says Robert Wang, the inventor of the Instant Pot and chief executive officer of Double Insight Inc, the Canadian company that sells the device. The majority of their sales are focused on the US market. In 2015, they created the official Instant Pot Community Facebook group as part of their marketing strategy. Wang says there are almost 200 Instant Pot speciality Facebook groups started by people they’ve worked with as well as customers who want to create more focused groups.

Wang spent more than 15 years in telecommunications before working in a small startup and catching what he calls “the entrepreneur bug.” He decided to turn his attention to creating a kitchen appliance that would help a problem he himself experienced personally: making dinner. He and his wife worked demanding tech jobs, so they found cooking dinner at home very challenging. They ate lots of fast food and take-out, but felt that was not the right way to bring up their two children. That’s how the idea for a fully automated cooker came to him.

“We looked at every ethnic group and their preferred comfort food, and we wanted to make sure that Instant Pot can be the best to cook them,” says Wang.

While Wang enjoys making dishes like sweet potato and eggs in his Instant Pot, as a Chinese immigrant who now lives in Canada, he makes traditional Chinese dishes too.

“There’s a special porridge that most Chinese cook, which actually has eight types of grains and beans. Normally this would take a very long time,” Wang says, referring to a dish known as Eight Treasure Porridge. “With the Instant Pot, you can cook it much faster than that and the result is much better as well.”

Recently, the company issued a recall for one of its models due to reports of overheating. Still, the Instant Pot maintains rave reviews on Amazon — a basic model has four-and-a-half-stars — and it’s a sought after product on the site as well.The online retailer says that its members purchased more than 215,000 Instant Pots on a single promotional day in 2016. The product has also been praised by culinary writers at the New York Times and Serious Eats.

Due in large part to their Facebook communities, says Wang, using the Instant Pot and sharing experiences is “very addictive.”

Chung says that people in his group for Korean food tend to look for familiar recipes. But he also notices that people are trying new and different things.

“I also see a lot of combination of different recipes and fusion dishes,” Chung says. “I think it’s awesome and a great representation of where our world is moving towards today — a big, ol’ melting pot.”