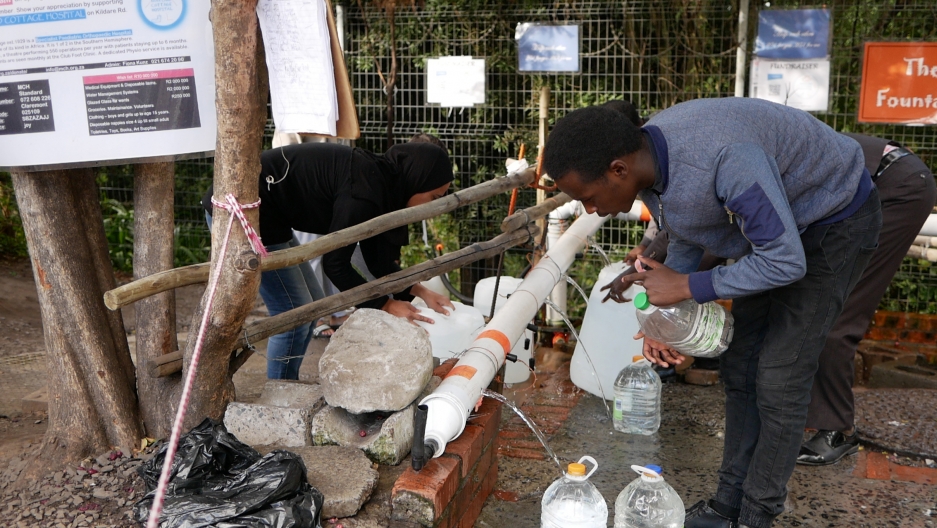 Cape Town residents gather to collect water at a spring with makshift spigots near Table Mountain. It's one of dozens of open springs across the city where residents come to collect extra water to add to their meager daily quota of 13 gallons.

It’s a simple, straightforward statement, but one weighted with relief in Cape Town in 2018. The city is deep into a years-long drought, and water use has been severely limited.

But water flows freely at this spring in Newlands, a suburb near the city’s landmark Table Mountain at the end of a dead-end road lined with homes behind white walls topped with purple flowers.

When Heckscher and her husband started coming here years ago, it was a secluded little corner. But these days, they have a lot of company. It's become a kind of Mecca for middle-class residents feeling constrained by the city's limits on water use.

On a recent Saturday afternoon, dozens of people parked nearby and walked down Kildare Road with buckets, bottles and jerricans, on their way to collect water that gushes out of a white plastic pipe with two dozen openings in it. 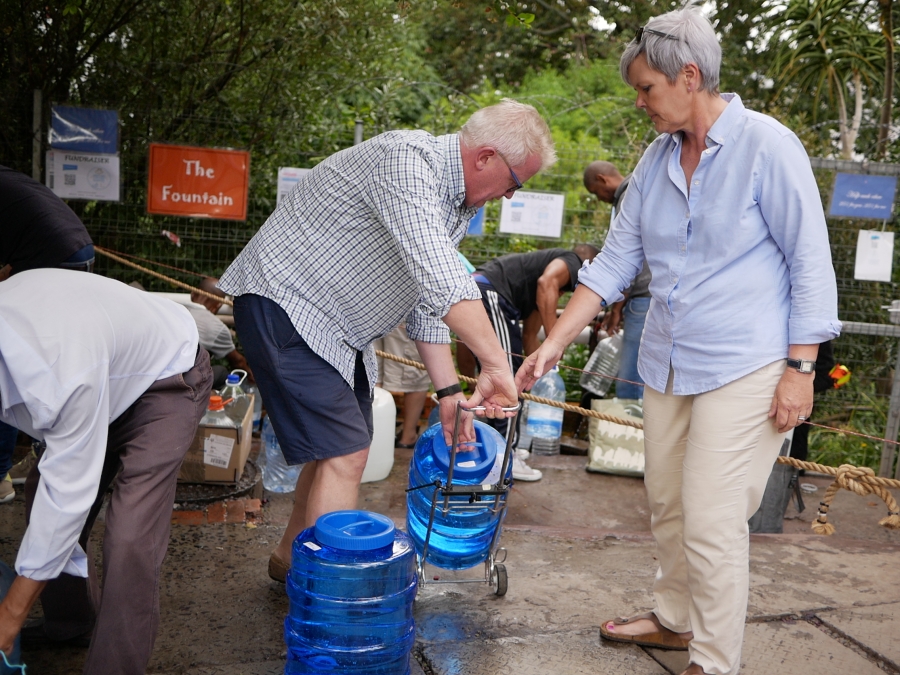 Sabine and Nils Heckscher collect water in Newlands, Cape Town. When they started coming to this spring years ago, it was a secluded little corner.

Faiek Swartz, 29, filled five bottles and then washed his face beside the tap and took a drink. The water will help top up the meager 13 gallons per day that he, like other Cape Town residents, is allowed to use these days.

Cape Town is suffering the effects of three years of drought. It has been warning residents of what it calls Day Zero, when the city’s taps could run dry. To avoid that extreme scenario, the local government has set tight limits on water use. It’s also hiked water rates: Residents can pay 30 times the standard rate if they use more than their share.

Related: 'Day Zero' has been postponed, but Cape Town is still scrambling to deal with its water crisis

But Swartz said collecting spring water here isn’t only about saving money. He also believes that the water in the spring is cleaner than his water at home. With the reservoirs supplying Cape Town nearly empty, Swartz — like many here — believes his tap water is carrying unhealthy sediment.

“[It’s] kind of a bit dirty,” Swartz said. “One of my flatmates actually had a problem with his stomach due to drinking the water that came out of the tap.”

The city says its water is safe for drinking. But Schwartz said he feels better when he fetches water here. “I think [it’s] much safer and pure to drink.”

After filling his bottles, Schwartz packed them into a black milk crate on his bike and tied them down with twine before pedaling away. 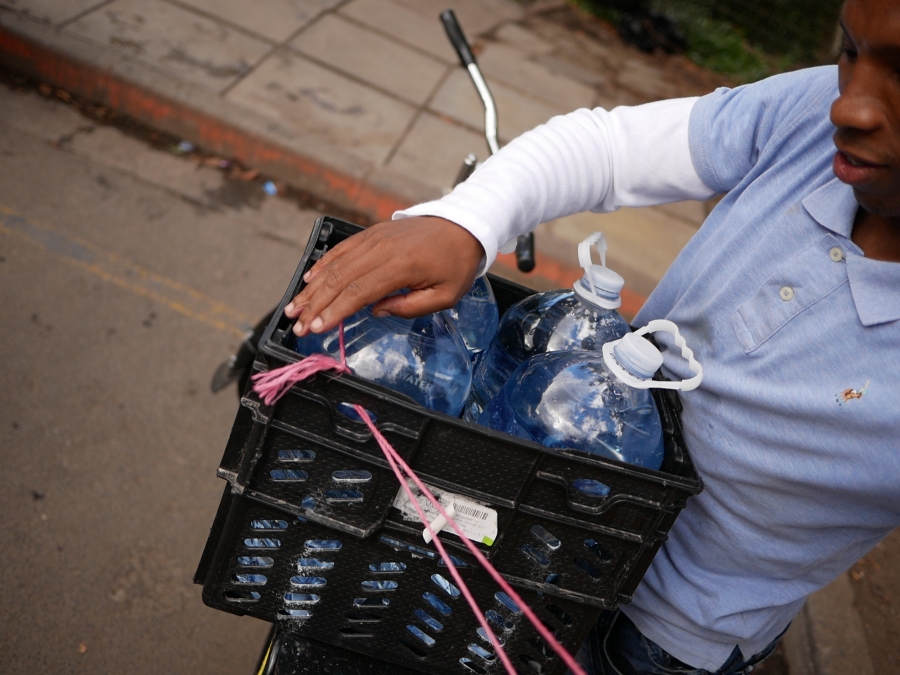 Faiek Swartz ties down bottles of water he filled at a spring in Newlands, Cape Town. Swartz said collecting spring water wasn’t only about saving money: He also believed the water in the spring was cleaner than his tap water.

Springs like this one aren’t the only workaround to the water restrictions in Cape Town. Many of the city’s wealthy have invested as much as $15,000 to drill private boreholes into the same deep aquifer that bubbles up here. Meanwhile, a quarter of residents live in townships, where communal taps are still the rule.

But the city’s dozens of open springs provide a measure of relief for many members of the city’s middle class.

Riyaz Rawoot watched people take their turns at the pipes from his perch on a stack of concrete blocks. He’s a physical therapist and he used to come here for just for breaks from his office nearby. 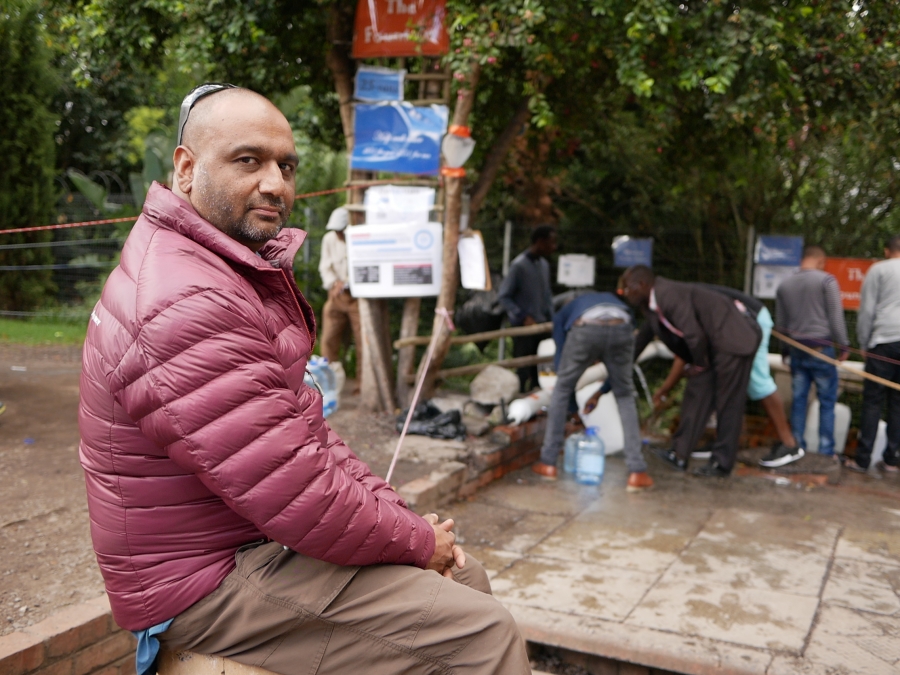 Riyaz Rawoot watches people take their turns filling bottles at a spring in Newlands, Cape Town. He’s a physical therapist and he said he built up the pipe and cement collection point to help people safely collect extra water.

But it wasn’t always so easy to collect water here.

The water used to gush out of a pipe “down in the hole there,” Rawoot said. “You can’t see it from here. And you literally had to go down the stairs, bend over, get your legs wet, and then play with a little pipe in order to fill up your can.”

It was Rawoot himself who made the spring more accessible. He’s installed the bigger white plastic pipe and punched it full of holes.

The scene at Newlands can be jarring: water gushing out of the ground in the middle of an epic drought.

Van Graan was tipped off to the place by a friend. Now she comes here every week. She lives on a pension and is very careful to avoid those high water rates.

“I only get a certain amount of money in a month. So I can’t pay extra,” she said. 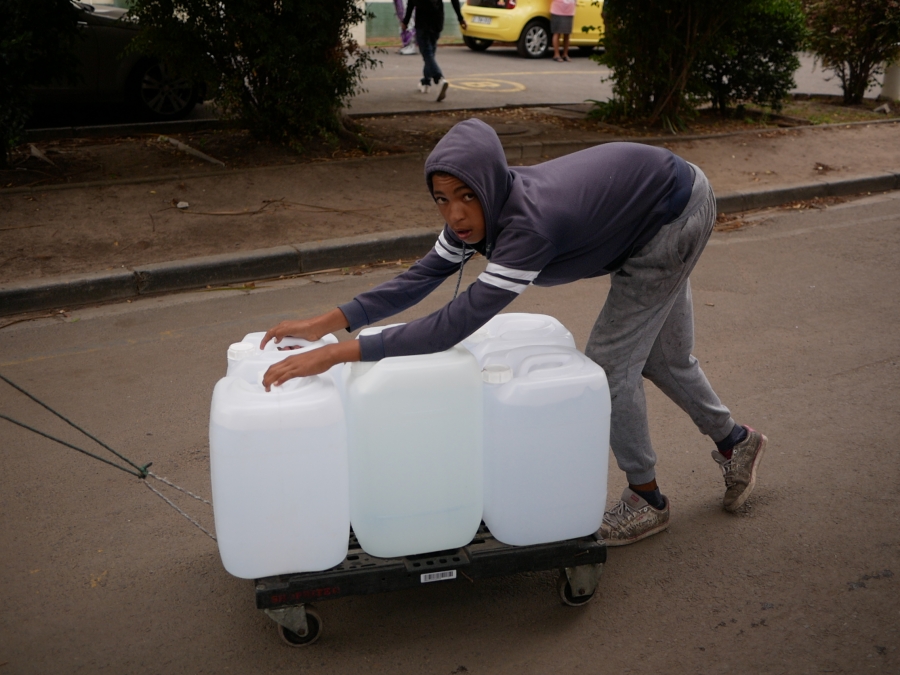 A boy pushes a trolley of bottles uphill from the spring. Collecting water at a spring in Newlands, Cape Town has become a little economy in recent months.

The water collection routine at the spring has become its own little ecosystem. When there are lines, people talk. Freelance porters cart jugs and buckets uphill to people’s cars. And those cars often jam up the neighborhood.

Mark Long, the priest at the St. Andrew’s Church just up the road, said water collectors sometimes fill his church’s parking lot on Sundays. Until recently, they also blocked the road leading to the spring.

“I had some parishioners on the corner who sold their house and moved out because they just couldn’t get out at all,” Long said.

The city has taken some steps to rein in the free-for-all. This Saturday afternoon, police kept people moving and directed cars as they parked.

And Long said there are some positives to this: The porters bring water to the church’s school during the week.

Attitudes can get testy at the spring, though. There can be long lines and arguments over people taking more than their share of water. Long recalled a fight that broke out at 2 a.m., But other times it’s downright pastoral, with a sense of easy camaraderie among those waiting to fill their containers. 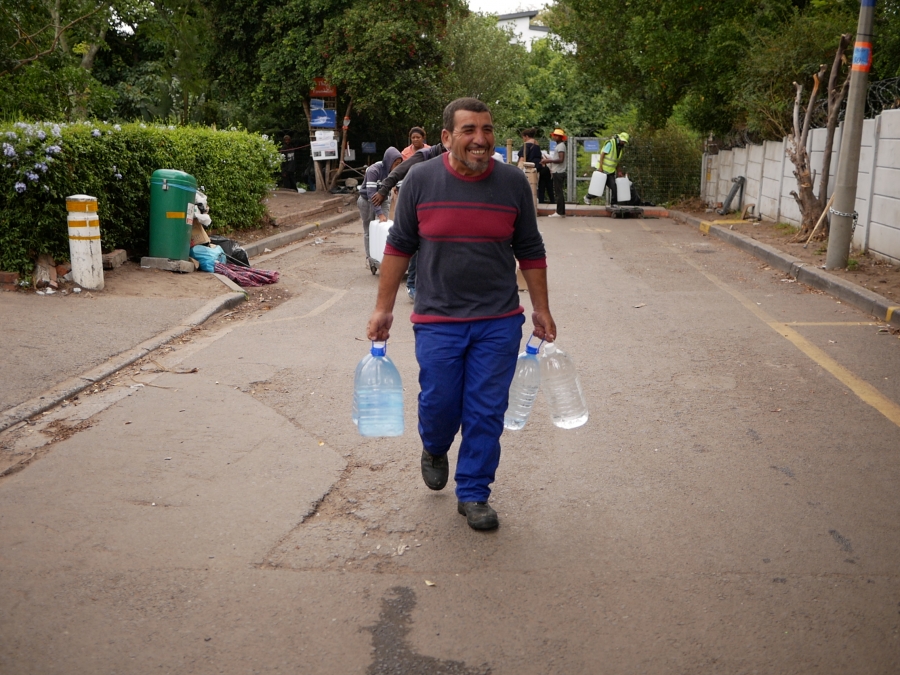 Abbas Mustafa carries some of the 18 bottles of water he filled at a spring in Newlands, Cape Town.

Abbas Mustafa sat for a moment to catch his breath after filling 18 bottles. He came here from his home seven miles away to collect water.

“It’s free, you know,” he said. “You save water how much you can until God makes his plan for the rain.”

Related: These Moroccans are turning foggy days into a solution to their water crisis

Editor's note: in the broadcast version of this story, Maureen Van Graan was mistakenly referred to as Maureen Graan. We apologize for the error.