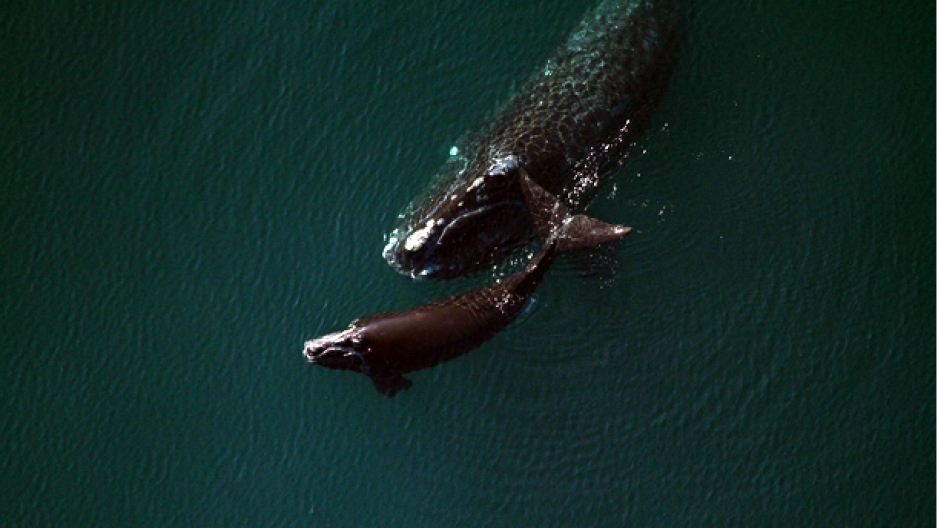 After a shocking number of deaths among North Atlantic right whales last year, no new births have been recorded so far this year, moving them ever closer to extinction.

Warming ocean waters have prompted the whales to move north from their usual summer feeding grounds in the Gulf of Maine into Canada’s Gulf of Saint Lawrence. Canada has fewer rules protecting them from ship strikes, and 18 of these rare giants died last season alone. Now, the report that the population produced no new calves in the past year is causing great concern among scientists.

“It's unprecedented," says Regina Asmutis-Silvia, executive director and senior biologist of the North American branch of Whale and Dolphin Conservation, a global wildlife charity. “We’ve never had a year when we didn't have a single calf born to the population.”

Though it’s been illegal to hunt right whales since 1935, only about 450 are alive today. To make matters worse, human impacts to the population have been more harmful to females, so there are probably only about 100 breeding females left.

The biggest problems the whales face are fishing gear entanglements, vessel strikes and food scarcity, Asmutis-Silvia says. Improvements to fishing lines that have increased their strength and durability have proved deadly to whales, and even if a whale survives a fishing gear entanglement, it suffers what are called sub-lethal effects. Entanglement causes an increase in stress hormones that can make it harder for females to get pregnant or carry a pregnancy to full term. As the climate changes, food resources are moving to different waters. Alternative foods may not be as healthy or make the females fat enough to produce the hormones that allow them to ovulate.

Right whales, and indeed all whales, add more than just beauty to the oceans, Asmutis-Silvia emphasizes. They are an essential part of an ocean ecosystem that keeps the planet and humans healthy.

“There is emerging research ... confirming that they play an incredibly important role as the ocean’s gardener,” Asmutis-Silvia explains. “The planet and humans need phytoplankton, which produces half of our oxygen and is the base of the marine food web. Phytoplankon sustains fish stocks and takes in carbon dioxide when it photosynthesizes, so it sequesters carbon and fights climate change. We need phytoplankton, and what phytoplankton need are whales.”

Unlike plants on land, phytoplankton can’t root into the soil, so they must have their nutrients brought to them. That's where whales come in, Asmutis-Silvia continues.

“Whales are great at diving, and they can do lots of things deep, but what they can't do when they're at depth is poop,” she explains. “Bathroom breaks are all at the surface, and the bathroom breaks fertilize phytoplankton. That’s where they get phosphorous and iron and all the things that they need. So whales literally are tending this forest in the ocean that humans need to survive.”

North Atlantic right whales feed on a different kind of plankton called zooplankton — specifically, a tiny animal called the copepod, which grazes on phytoplankton. Ocean currents tend to concentrate copepods where the right whales can feed on them, so the whales are dependent on a healthy ocean system and a healthy climate to do their crucial job of tending the ocean forest.

Scientists don’t fully understand how whales find their food. Studies done by the Center for Coastal Studies in Cape Cod Bay show that whales won't even open their mouths if the concentration of copepods isn't high enough, Asmutis-Silvia says.

Scientist do know that right whales must now travel to different places than usual to find sufficient food. The copepods they typically feed on in the Gulf of Maine are highly temperature dependent, Asmutis-Silvia explains, and concentrations of that particular kind of copepod seem to be diminishing in that region — likely because the Gulf of Maine is warming faster than the rest of the North Atlantic. Twelve of the 18 whales that died last year were found as far north as the Gulf of Saint Lawrence in Canada.

As dire as the situation seems for the right whale, Asmutis-Silvia says she always sees hope.

“I can't fathom that we would allow them to go extinct,” she says. “We did this; we can undo it. I think we just have to be creative and be thoughtful, and everybody has to kind of pull together to do it. … They belong to everybody. We all need them. That means everybody has a say in this, and everybody has something they can do. If we know that a change in climate is a problem, then everybody collectively can do something to help with that. Those old adages about recycling and reusing add up, and they are meaningful. We all have a stake in this.”