In Senegal, an estimated 40,000 women work as fish processors. However, overfishing by foreign fleets, illegal fishing and climate change are making fish scarce in the region and hitting processors the hardest.

On a mild February afternoon in Yoff, one of Dakar’s oldest fishing quarters, the beach is abuzz with activity. Fishermen in army-green waterproof gear haul wood-carved boats ashore to the sound of their own low and steady singing; women dressed in bright blues, yellows and reds call out to straggling shoppers to sell off the last of their catch, splayed out on low wooden tables or tarps; and horse-drawn carts hustle down the beach carrying families (and the occasional goat) before the sun sets.

Tonight, the neighborhood is celebrating Mame Ndiaré — Yoff’s sea divinity, which is said to watch over the fishing community, according to local animist tradition — so most of the area's residents are eager to wrap up their work. But amid this flurry, one spot remains strangely still. Further ashore, a dozen wooden tables strewn across a deserted stretch of sand quietly bake in the sun, untouched by the women who would normally work there. They haven’t come today. There’s no more fish for them, and there hasn’t been for months.

In Senegal, an estimated 40,000 women work as fish processors — drying, salting and smoking fresh fish to convert it into a hard, durable substance, according to the Collaborative Management for a Sustainable Fisheries Future (COMFISH). Processed fish is a vital source of protein for populations deep in the country’s arid interior and beyond, in neighboring Burkina Faso and Mali, where fresh fish is an expensive commodity. Processed fish — which doesn’t require refrigeration and can hold for months — is significantly cheaper to transport across the Sahel. 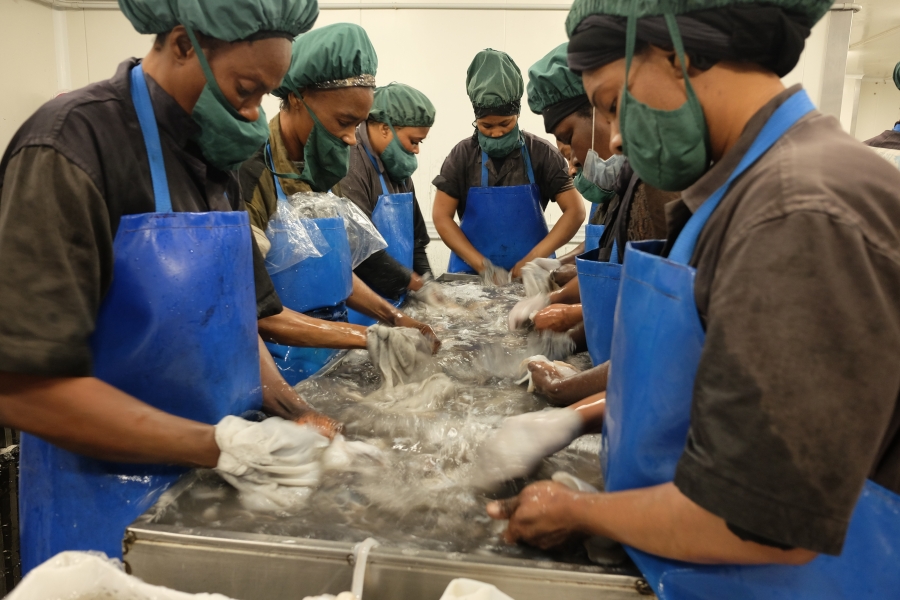 Women working at the Blue Fish factory in Yoff, Senegal.

But a trifecta of problems — overfishing by foreign fleets, illegal fishing and climate change — is making fish scarce in the region and hitting processors the hardest. In an attempt to make ends meet, fishermen are selling what they are able to catch to fresh-fish traders and export factories, who’ll pay more for a batch than the locally oriented processors, leaving the women high and dry.

And with no processing work left, many women are turning to the booming export industry instead.

It’s an age-old development paradox: In order to feed their families and maintain some degree of financial autonomy, women are better off exporting fish products to foreign markets — even though that means shipping a vital protein source abroad when a food security crisis at home is already underway.

“When it comes to the politics of fishing, the No. 1 objective is food security,” Khady Sané Diouf explains from her office in Yoff. She heads COMFISH, an initiative funded by the US Agency for International Development. “At the same time, we give too much importance to exportation. So, there’s a contradiction there.”

Dwindling fish stocks pose an imminent food security threat to Senegal — not famine of the barrel-bellied type we’ve grown accustomed to seeing at World Press Photo exhibitions, but what USAID calls “hidden hunger,” or micronutrient deficiency including lack of protein. According to the latest data from Senegal’s National Agency of Statistics and Demography, 71 percent of children under 5, 54 percent of women of reproductive age and 61 percent of pregnant women are anemic. National fisheries typically account for approximately 70 percent of animal protein consumed in Senegal.

Export factories contend that their business has no bearing on domestic food needs because they sell species that “Senegalese people don’t eat,” like tuna and hake. Effectively, larger, meatier fish are too expensive for the average Senegalese shopper, who instead relies on smaller fish like round sardinella, or yabóy in Wolof, the local language.

Bathily founded Bluefish in 2005, shortly before the export business exploded with the arrival of foreign fleets eager to feed Europeans’ and Asians’ appetite for seafood. Encouraged by generous tax breaks, foreign companies — especially Chinese and Korean — set up export factories on the ground, but often failed to employ locals as was hoped, Bathily explains.

Senegal is among the 20 countries in the world with the highest unemployment rate, hovering at 48 percent. That economic reality has long fueled migration to Europe, and the collapse of the fishing industry over the last decade has become one of the main factors feeding that push.

With Bluefish, Bathily hoped to invest in his home country and create jobs, he explains. Today, the company employs some 200 workers, mainly women, at its Yoff-based factory, a 24/7 enterprise where women are paid by the kilo (Bluefish wouldn’t tell me how much). Though the women aren’t guaranteed work every day — if a smaller quantity of fish is brought in, some workers are turned away — the company prides itself on being fair and accommodating. Professional development workshops are occasionally held and prayer mats are provided in the changing rooms.

But not everyone agrees with Bathily’s development argument.

“Our people must be able to feed themselves before we think of commercial gains abroad,” says Ibrahima Cissé, Greenpeace Africa’s senior oceans campaign manager. “Even if, often, the arguments you’ll hear are that the exported species are not the ones used by local populations. Those species could be consumed by local populations if there’s a protein shortage.”

Likewise, COMFISH’s Diouf is not convinced the divide between exported species and locally consumed species is as clear-cut as Bathily would make it out to be. Contrary to his assertion, she says export businesses like Bluefish are “definitely competition to women processors.”

“When the factories come, their argument is that they’ll create jobs. And if you tell the state, I’m going to bring jobs, the state says, ‘Oh, halleluja, come!’ But what really happens is something else,” Diouf says.

To that end, COMFISH launched a program in Cayar, a fishing town to the north of Dakar, where women processors create a product that can be exported to Europe. The nongovernmental organization provided the women with modern tools and equipment to allow them to meet the European Union's stringent health codes.

“[The fish] needs added value to be exported to Europe,” Diouf explained.

Nevertheless, she’s conscious of the inherent contradiction within her organization’s initiative.

“We’re shooting for two things. The first goal is to make sure Senegalese can meet their fish needs. As you can see, these days, there’s no more fresh fish,” Diouf explains. “But our other objective is to help these women succeed, meaning, help them improve their life conditions, because these women depend on processing jobs to take care of their families.”

This project has been co-funded by the European Journalism Centre (EJC) via its Innovation in Development Reporting Grant Programme.