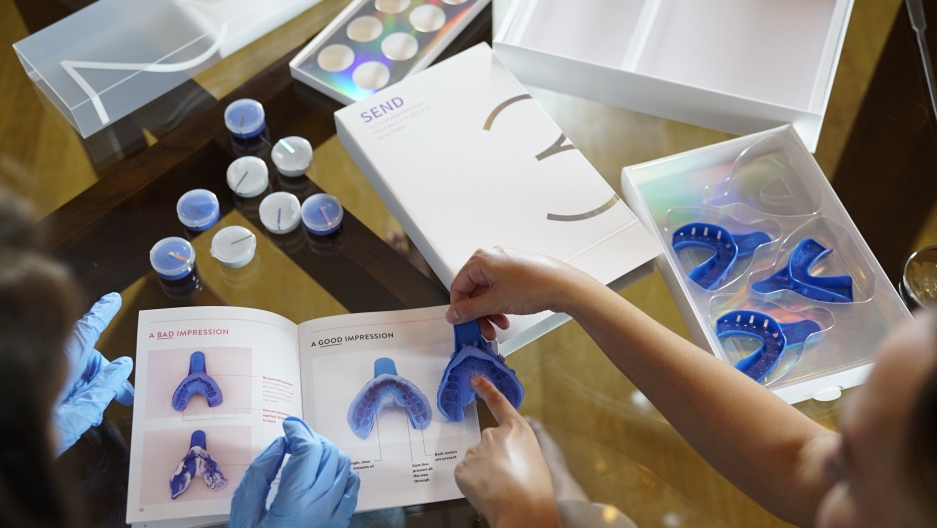 Candid Co. sends customers a kit to take impressions of their teeth from home. An orthodontist then remotely comes up with a treatment plan.

This idea, braces-from-home, isn’t for everybody. Many of us need the assurance of regularly visiting our orthodontist to ensure everything is going smoothly.

For others, though, there may be a cheaper and easier route. Nick Greenfield hatched the idea for Candid Co. not long after he went to the dentist in 2015 and found out that his teeth had started shifting.

“And I looked at the costs and saw $5,000 to $8,000 were the quotes that I was getting for doing clear aligners,” says Greenfield, who is Candid’s CEO. “I started looking into this business and realized that there are millions, if not tens of millions of people across the country that would absolutely love to do clear aligners but either don't have the time or they don't have the money to actually pay for it,”

Several companies are now offering braces from home. They send a kit in the mail so you can make an impression of your teeth. You send back your dental impression, along with some photos, and the experts develop an at-home care program tailored for you.

Greenfield says his new FDA-approved aligners will typically set people back about $1,900, roughly one-third the cost of traditional clear aligners or braces.

“You don’t necessarily have to come into an office every couple of weeks, you’re able to send in photos and the orthodontist is able to make recommendations from there,” says Greenfield.

Greenfield began his career at Lyft, where he was the ridesharing company’s 12th employee. With Lyft, the founders were trying to solve the problem of lack of access to transportation. Now, he’s looking at ways to address lack of access to orthodontists — not just in rural America but across the globe.

“In the same way that cell phones in India, for example, helped skip some of the landlines or even wired computers, the opportunity for direct-to-consumer clear aligners in markets that are developing, where there isn’t the same infrastructure for orthodontics and dentistry, are incredible,” says Greenfield. “We certainly have international aspirations.”

This concept, though — braces-by-mail — has traditional orthodontists concerned.

“I think it’s important for patients to understand that orthodontics is not a product. Comprehensive orthodontic treatment is a complex medical process,” says Kevin Dillard, general counsel for the American Association of Orthodontists.

Dillard says it’s in the patient’s best interest to have treatment under the direct, in-person supervision of an orthodontist. The association, which represents 19,000 dental professionals, has filed complaints with boards and attorneys general in 36 states.

“In a modern orthodontic office, there is extraordinary space-age technology that allows the modern orthodontist to be able to diagnose and then come up with a treatment plan that is far more advanced. If patients are being diagnosed based upon nothing more than a simple photograph, and a physical model or something like that, that’s going back to a time really in the first half of the last century when that was the only thing they were being diagnosed with.”

Orthodontists can spot a bone anomaly or root problem that a photo could miss. Dillard warns that if the jaw isn’t aligned quite right, for example, braces from home increase the risk of lasting damage.

Yes, orthodontics from home won’t be appropriate for everybody says Marc Ackerman, the head of orthodontics at Boston Children’s Hospital.

“For a 10-year-old who probably has some type of comprehensive problem, going to a bricks-and-mortar orthodontist is clearly the way to go,” says Ackerman, who is also executive director of the American Teledentristy Association.

But Ackerman says for those who want to make some minor improvements to their smile, companies that offer clear aligners in a box represent the next evolution in care.

Again, there are several companies now offering at-home orthodontics, mostly to adults (Candid Co. has an 18-year-old age minimum and the leader in the field, SmileDirectClub, has a 12-year-old minimum).

And to be perfectly clear: Ackerman says these companies are not selling do-it-yourself braces.

“Do-it-yourself is really going to a place like Home Depot or Lowe's, picking up some type of wire or rubber band, sticking it in your own mouth trying to move the teeth,” says Ackerman. “In all of these interventions, the doctor is integral to the process.”

“We think we’re going to be growing the market and ultimately this isn’t cannibalistic at all,” says Greenfield.

As the at-home model expands overseas, it should mean more business for orthodontists able to reach people beyond the reach of the traditional orthodontist offices. It could happen soon: The leader in clear aligners, Invisalign, now has a stake in at-home orthodontics and is expanding its operation into the Middle East and Africa.

Those places already have their own orthodontists, of course. But braces remain a luxury item for most, and a surge of new customers could mean big business for these braces-at-home companies. That is, if consumers, and orthodontists, in Saudi Arabia, Egypt and Kenya, are OK with mail-ordered braces in a box.