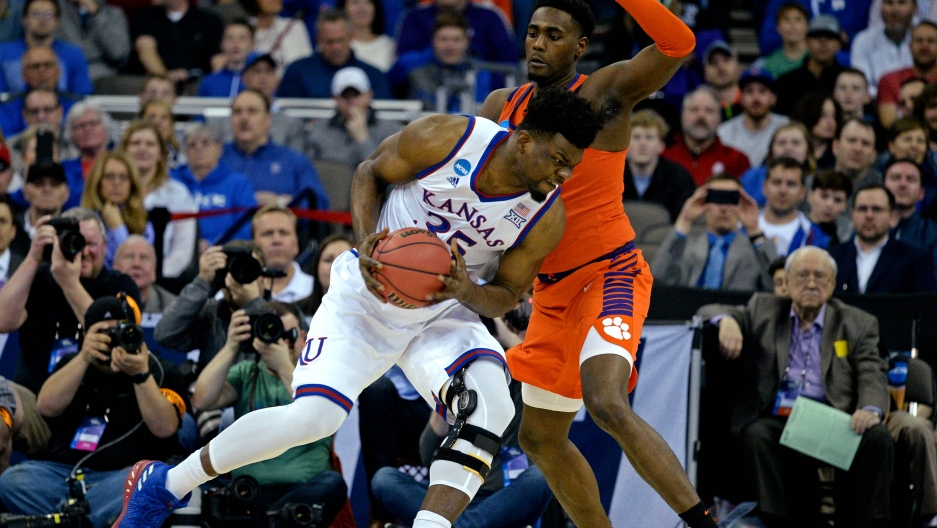 Kansas Jayhawks center Udoka Azubuike drives to the basket against Clemson Tigers forward Elijah Thomas during the first half in the semifinals of the Midwest regional of the 2018 NCAA Tournament.

Udoka Azubuike left his native Nigeria six years ago, first to go to prep school in the US and then to attend college and play basketball at the University of Kansas.

He hasn't seen his mother, Florence Azuonuwu, since he left Nigeria. But thanks to his winning ways on the basketball court, a change in NCAA rules a few years ago, and the intervention of a Republican member of Congress from Kansas, the pair are set for a reunion this weekend in San Antonio.

“She put a Bible in my hand. She said, ‘Don’t forget this. Always keep this in your mind and allow God to guide you,’" Azubuike told The Kansas City Star of the last time he saw her. Azubuike still has the Bible.

Since 2015, the NCAA has paid either $3,000 or $4,000 — depending on whether a player's team wins and advances to the national championship — to the families of players on Final Four teams, to offset the cost of attending games. But money wasn't Azubuike's family's only obstacle. Getting a visa to come to the US is typically a time-consuming, cumbersome process for someone from Nigeria. Up until Thursday, Kansas coach Bill Self said the team wasn't overly hopeful a visa would come through in time.

Kansas Rep. Kevin Yoder, a University of Kansas graduate himself, worked with the university and the State Department to expedite the visa process.

Visa in hand, that stipend will allow Azuonuwu to have her first reunion with her son since she gave him that Bible. She was due to arrive in San Antonio Friday afternoon.

Meanwhile, back in Nigeria, basketball fans will be staying up late into Sunday morning to watch Azubuike's Kansas Jayhawks attempt to beat Villanova. Tip-off is set for 8:49 ET on Saturday night — which is 1:49 a.m. in Lagos, Nigeria.

"Basketball in Nigeria is really huge. Basketball in recent times has really grown leaps and bounds," said Nigerian sports reporter Femi Adefeso. "Apart from the fact that we have a few Nigerian stars in the NBA and in Europe, national teams have been giving us lots of joy."

He added that while soccer is still the No. 1 sport in Nigeria, basketball is a close second. He said both the men's and women's teams are well-followed.

While Azubuike was known for his shot-blocking abilities in Nigeria, Adefeso said he's definitely grown and improved since he came to the US.

"I call him the baby Shaquille O'Neal. He's in the paint. He always wants to go up strong, score buckets. He has what it takes to really dominate," he said.

Of course, Azubuike isn't the only foreign player who will be featured in this weekend's Final Four. In fact, he's not even the only one who will start on the Jayhawk team.

The Jayhawks also start Ukrainian Sviatoslav Mykhailiuk at guard, and Silvio De Sousa, of Angola, comes off the bench — often in place of Azubuike. The early game, between the University of Michigan and Loyola University Chicago will also feature an international star: Moritz Wagner of Germany leads Michigan in scoring.