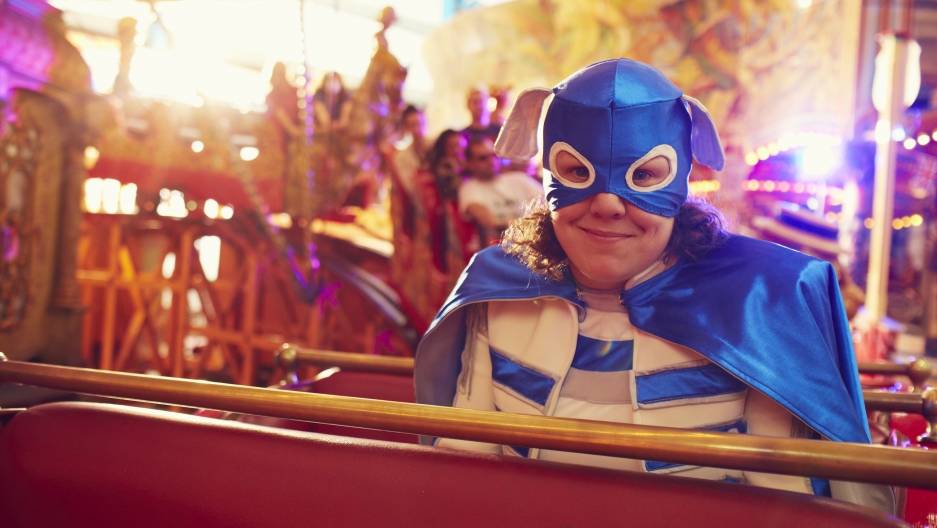 Jess Thom has Tourette syndrome, a neurological condition which causes movements and noises she can’t control. But Thom has turned her disability into a catalyst for creativity, inspiring others to transform her often fascinating vocal tics into art.

Thom is a writer and artist who lives in London. Her vocal tics are words and phrases that can be made up of nearly anything in her vocabulary, but her most common vocal tic is the word "biscuit." “It means that I am very ‘biscuity,’” she says with a laugh.

And indeed she is very biscuity — saying “biscuit” every 10 seconds or so, interspersed with regular speech and other surprising words and phrases.

Tourette syndrome is often thought of as the “swearing disease,” but 90 percent of people with Tourette’s don’t tic inappropriate or obscene things. The 10 percent who do are said to have coprolalia. Thom is one of those 10 percent, but she says it is “quite an unusual part" of her condition.

Thom started seeing symptoms of Tourette syndrome around age 6. At first they were subtle, but they grew increasingly frequent in her early 20s. But even then she didn’t get a diagnosis. “It became increasingly obvious that I needed a way of explaining to other people and it’s very hard to explain something that you don’t understand yourself,” Thom says.

Her close friend Matthew Pountrey helped nudge Thom to get a diagnosis and to confront her disability head-on. They had long conversations about Tourette’s and what it might mean for her. Then Pountrey said something that changed her life.

“Some of the imagery of her tics, some of the longer ones” — like the phrase "telescopic pear" — “are just incredible poetic visual moments,” Pountrey says. “It seemed like, if we don’t write these down, then the next day we’re going to think, ‘What was that amazing thing you said?’ And it’s going to be lost.”

She and Pountrey decided they should document her tics — not just write them down, but share them on a website, called Touretteshero. The idea is that her "random language-generating machine" is kind of a superpower to create language for the purpose of inspiring art.

Pountrey and Thom document her most unusual tics and post them for artists to use however they want. The point is not just to normalize Jess’s condition, but to show it can also help inspire artists.

A couple of years ago, Thom and Pountrey invited Amber to make the Touretteshero Christmas card — assisted by Thom's tics. While most of Thom's tics have nothing to do with what she is actually thinking when they pop out, there is a suggestibility to some tics. They decided to try to provoke “a load of Christmas tics” and record them, Jess says. It worked.

The result was a Christmas card Andersen designed with Santa Claus coming to town riding on a “massive cat flying over the rooftops” — an intricately detailed, Victorian-style pen drawing of an almost mythical-looking giant cat with Santa Claus on it.

Keir Williams, of the video art duo Chris and Keir, has also mined Thom’s library of vocal tics for ideas. “You go through tears of laughter to kind of these slightly poignant moments,” Williams explains. “It just provides you with source material that isn’t random, but doesn’t quite make sense. It sort of lies somewhere between the two, between sense and nonsense, which in itself is a really exciting thing as an artist, I think.”

That space between sense and nonsense is what makes Touretteshero a unique source of inspiration.

“They brought the tics to life in a whole new way,” Thom says. “They did one of “this fish is reversing,” showing a fish going slowly backwards down a canal towpath. Or “Lebanese balloon animal,” which is a man with loads of balloons stuck to his bum, parading on all fours to the Lebanese national anthem.”

Most people still think of Tourette's as the swearing disease, but Touretteshero has grown into something much bigger now. They’ve started traveling stage shows that are open to anyone to attend, with or without Tourette's or any other disability. It’s extremely inclusive and, because of this inclusivity and the diverse audience that attends the performances, anything can and does happen during a performance.

Art is a useful tool for understand something in a new way and understanding Tourette syndrome in a new way is part of the reason why Thom and Pountrey started Touretteshero.

“We have a motto [for] Touretteshero: 'Changing the world one tic at a time,’” Pountrey says. “When we started, that just sounded good, like something we intended to do, but wasn’t something that we necessarily thought we [could put] into action every day. Now, eight years down the line, it feels like we are genuinely in a position to help bring about some quite big change within society — particularly in the arts, in terms of the way disability is viewed and also the way people understand Tourette’s."

“I don’t think I had any idea of what I was letting myself in for, and that’s beautiful,” Thom says. “We haven’t had any set ideas or set agendas. Touretteshero has surprised us in so many ways and has been more important and successful to me than I could have ever imagined and has changed my life in ways that I could never have imagined.”

This article is based on a story that aired on PRI's Studio 360 with Kurt Andersen.