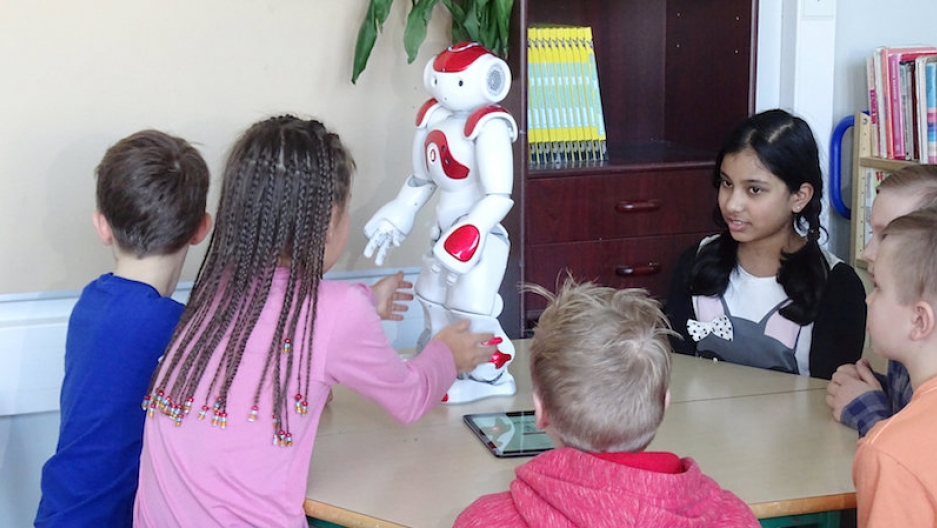 Students use a language trainer robot, Ellias, during their lesson at the school in Tampere, Finland March 27, 2017.

Elias, the new language teacher at a Finnish primary school, has endless patience for repetition, never makes a pupil feel embarrassed for asking a question and can even do the "Gangnam Style" dance.

Elias is also a robot.

The language-teaching machine comprises a humanoid robot and mobile application, one of four robots in a pilot program at primary schools in the southern city of Tampere.

The robot is able to understand and speak 23 languages and is equipped with software that allows it to understand students' requirements and helps it to encourage learning. In this trial however, it communicates in English, Finnish and German only.

The robot recognizes the pupil's skill levels and adjusts its questions accordingly. It also gives feedback to teachers about a student's possible problems.

Some of the human teachers who have worked with the technology see it as a new way to engage children in learning.

"I think in the new curriculum the main idea is to get the kids involved and get them motivated and make them active. I see Elias as one of the tools to get different kinds of practice and different kinds of activities into the classroom," language teacher Riikka Kolunsarka told Reuters.

Elias the language robot, which stands around a foot tall, is based on SoftBank's NAO humanoid interactive companion robot, with software developed by Utelias, a developer of educational software for social robots.

The math robot — dubbed OVObot — is a small, blue machine around 10 inches high and resembles an owl, and was developed by Finnish AI Robots.

The purpose of the pilot project is to see if these robots can improve the quality of teaching, with one of the Elias robots and three of the OVObots deployed in schools. The OVObots will be trialled for one year, while the school has bought the Elias robot, so its use can continue longer.

Using robots in classrooms is not new — teaching robots have been used in the Middle East, Asia and the United States in recent years, but modern technologies such as cloud services and 3D printing are allowing smaller start-up companies to enter the sector.

"Well, it is fun, interesting and exciting and I'm a bit shocked," pupil Abisha Jinia told Reuters, giving her verdict on Elias the language robot.

Despite their skills in language and mathematics however, the robots' inability to maintain discipline amongst a class of primary school children means that, for the time being at least, the human teachers' jobs are safe.