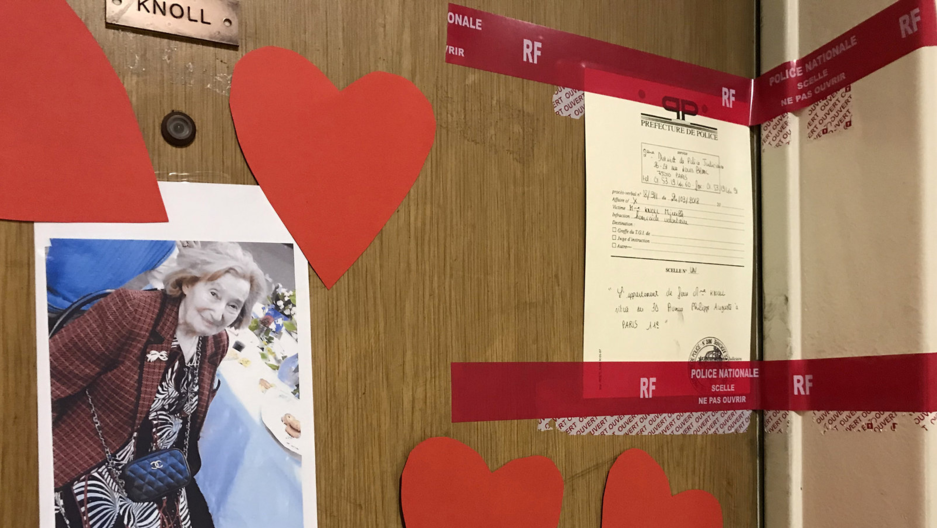 Red police tape and a photograph are seen on the front door of the appartment of Mireille Knoll in Paris, France, March 27, 2018.

The far-right National Front and hard-left France Unbowed movement on Wednesday said they would defy the wishes of a prominent Jewish group and take part in a march to honor a Holocaust survivor killed in a suspected anti-Semitic attack.

Mireille Knoll, 85, was found dead with 11 stab wounds at her apartment in a working-class district of Paris on Friday. The apartment was set ablaze after the attack and her body was badly burned. Police suspect that Knoll's Jewish religion was a motive for the killing.

Knoll will be buried on Wednesday in Bagneux on the southern outskirts of Paris ahead of the march organized by Crif, an umbrella body of French Jewish groups. Crif's leader told far-right and far-left groups not to attend the rally.

"Anti-Semites are over-represented in the far left and the far right, making those parties ones that you don't want to be associated with," Crif director Francis Kalifat told RTL radio. "Therefore they are not welcome."

His comments underscore the enduring alarm among France's 400,000-strong Jewish community over anti-Semitism, which Interior Minister Gerard Collomb on Tuesday described as a cancer that must not be allowed to eat away at the nation.

Israel's Foreign Ministry condemned Knoll's murder and said it "underlines the need to continue combating anti-Semitism in all its variations".

Knoll escaped being deported to Auschwitz during World War II, when 13,000 Jews were rounded up in July 1942 in the capital's Velodrome d'Hiver.

Her son Daniel said the rally should be open to everyone.

Other marches are planned in Lyon, Marseille and Strasbourg. France Unbowed said it would take part.

"We had planned to take part in the rally and will be there no matter what," France Unbowed lawmaker Adrien Quatennens told LCP TV. "Being associated with anti-Semitism is unbearable."

The National Front also said its leader Marine Le Pen and other representatives would take part in the Paris march. Le Pen has strived to rid the party of the toxic anti-Semitic reputation it gained under her father, party founder Jean-Marie Le Pen.

However, France's highest court provided a reminder of the party's past on Tuesday when it upheld the conviction of her father for describing the Nazi gas chambers as a "detail" of history. It confirmed a 30,000 euro fine against him.

President Emmanuel Macron's government said the rally should be a moment for national unity.

Macron made reference to Knoll's death in a national tribute to a gendarme killed last week in an Islamist attack. The president said Knoll was murdered "because she was Jewish," by a killer who did not value life.