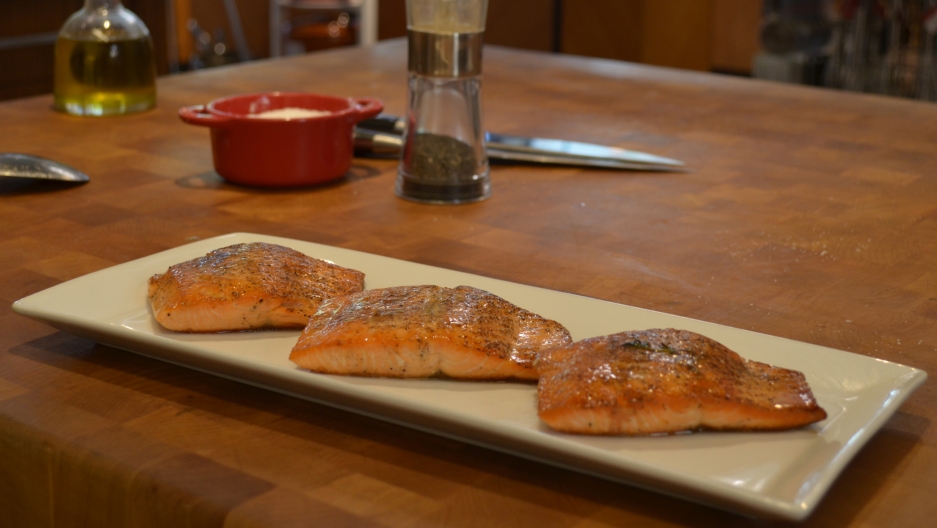 You won't find a lot of wild salmon on menus or in your supermarket anymore, but the Namgis First Nation's group in British Columbia hopes you'll find their tank-farmed Kuterra salmon the next best thing.

Alert Bay isn’t exactly a premier destination on British Columbia’s rugged Pacific Coast. On this winter day, there are more crows than people on the town’s wooden sidewalks, and most of the few small businesses near the waterfront are closed for the season. The biggest building is an abandoned salmon cannery, a reminder of what used to be here.

It’s a past that Bill Cranmer remembers well.

“In the ’40s, ’50s, Alert Bay was the — you could call it the salmon capital of the world,” says Cranmer, a hereditary chief of the Namgis First Nation, one of British Columbia’s native groups. “Before that, of course, our people had the richest river on Vancouver Island.” 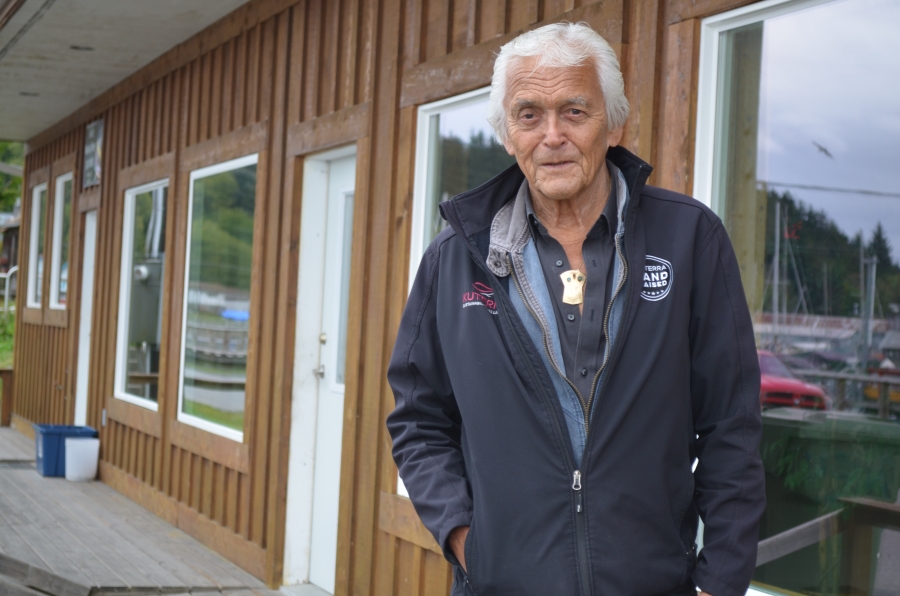 Cranmer sits for an interview in one of those closed businesses — his own restaurant, which he’s been rebuilding since it burned down a couple of years ago.

For centuries, he says, salmon sustained the Namgis’ lives and culture.

“Our ceremonies are tied to all of these things that used to make our people healthy,” he says. “We even have a salmon dance.”

But he says there are hardly any wild salmon left here. They’ve been hit by dams and other development along the region’s rivers, overfishing, a warming ocean, and, he says, the rise of salmon farms nearby. There are now more than 60 salmon farms in the waters of British Columbia and neighboring Washington state, and Cranmer says they’re bringing big problems for wild fish, including fish waste and parasites.

Cranmer says if he and his Namgis First Nation people had their way, they’d get rid of open-water salmon farms. But they can’t, so they’re trying another idea for rebuilding a salmon economy for their community. They’ve built their own salmon farm — on land.

It’s called Kuterra, and it sits across the bay in nearby Port McNeill, in what looks like a non-descript warehouse, surrounded by a chain-link fence.

Behind its gray metal walls is Canada’s first land-based farm for Atlantic salmon, the most commonly farmed species. Inside, hundreds of salmon glint greenish in big round tanks, where they feed and grow until they’re ready for harvest. The sound of swirling water and food pellets rushing through metal tubes fills the huge room.

CEO Gary Ullstrom says Kuterra produces about 12,000 pounds of fish a week. What it doesn’t produce is contaminants that enter the local ecosystem. 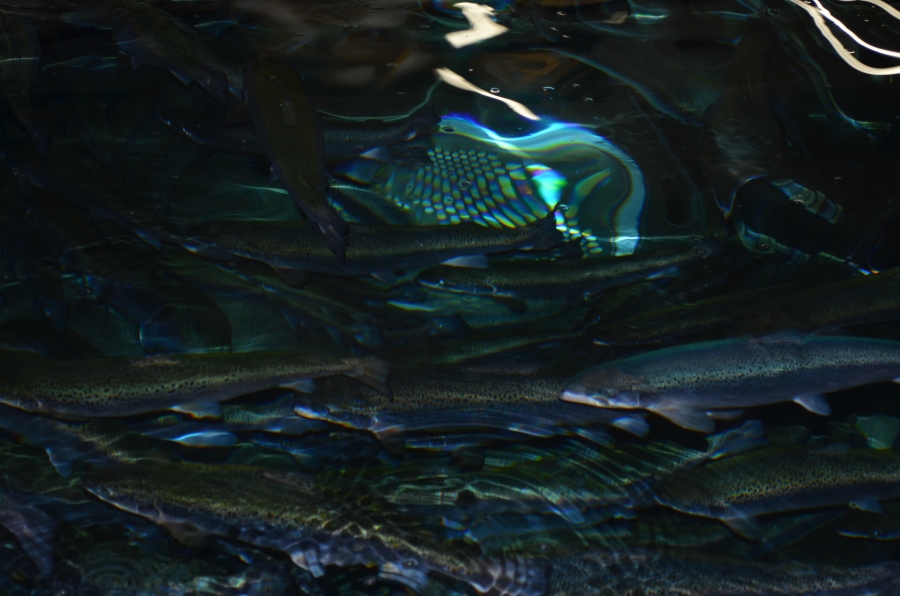 Hundreds of salmon swirl in the water of each tank at the Kuterra salmon farm in Port McNeill, Britsh Columbia. Unlike open-water salmon farms, the waste from Kuterra fish is processed naturally and the water is recirculated.

“Kuterra is good for the environment,” Ullstrom says. “There's no antibiotics. There's no pesticides” — and no parasites to infect wild fish.

Also no fish waste. On the other side of the warehouse from the feeding tanks, the wastewater flows through a filtration tank, where it’s treated by bacteria and reused.

This is in stark contrast to open water fish farms, where the salmon are raised in mesh pens and the waste and other contaminants flow right into the sea.

Critics say that’s bad for the ecosystem and wild fish. Operators of open-water fish farms say it’s not. They also argue that their approach is less resource-intensive, using less energy and land.

The science itself is still uncertain. Both approaches are supported by credible evidence. But Kuterra’s land-based approach has gotten support from a range of sustainable seafood organizations, including a "Best Choice" recommendation from the Monterey Bay Aquarium's Seafood Watch program and an Ocean Wise designation from the Vancouver Aquarium.

But despite these endorsements, there are still some big hitches in the company’s plans. Its approach might be more environmentally sustainable, but Kuterra has struggled to build a sustainable business.

For one thing, while all those farms in the ocean can just let their waste float away, Kuterra has to carry the cost of its wastewater treatment system.

And then there’s the company’s location. 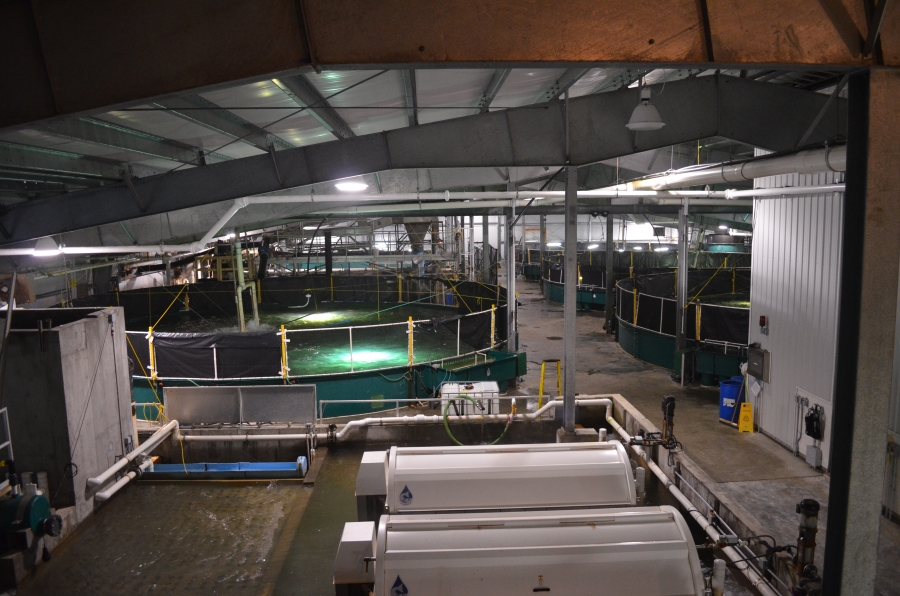 Each tank in the Kuterra facility holds hundreds of salmon. The company harvests roughly 12,000 pounds of fish a week.

“You’re out in, you know, northern Vancouver Island, literally at the end of the road, of the world,” says John Volpe, a professor who studies fish farms at the University of Victoria. “Transportation costs are quite demanding.”

Only one grocery chain in British Columbia carries Kuterra salmon, and on a recent day it was the most expensive fish at their seafood counter. Across the border in Washington state, one grocery chain stopped carrying Kuterra because of the expense and the unreliable supply.

And then there are the jobs.

The big idea behind Kuterra was to help restore a salmon-based economy for the Namgis Nation. But so far, Kuterra has barely made a dent, in part because nearly everything about the facility is mechanized. The facility has only three full-time employees, none of whom are Namgis. The only members of the Namgis employed by the company are two men who come in once a week to help harvest and pack the fish.

CEO Ullstrom says he believes Kuterra can overcome its challenges and achieve its goals.

“There's a whole host of innovations” coming along that will drive down costs he says, citing things like bigger facilities and tanks that automatically sort and move the fish as they grow.

But, ultimately, Kuterra's also counting on a shift in public opinion, and maybe in regulation.

That might be starting to happen. Just south of the British Columbia border, Washington just passed a law that will phase out open-water salmon farming in the state over the next five years.