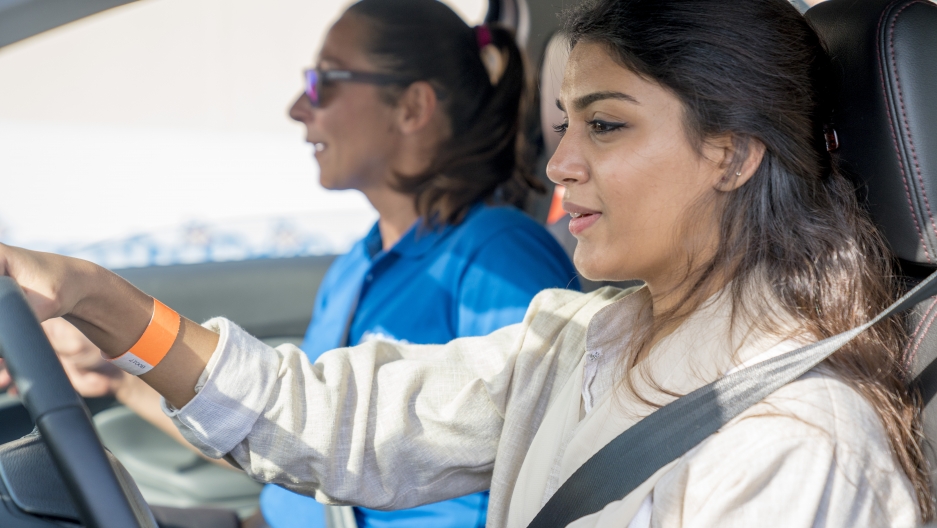 Students at the all-female Effat University in Jeddah, Saudi Arabia participate in a driving skills workshop run by Ford.

It's the day when King Salman bin Abdulaziz al-Saud issued a decree granting women the right to drive. The news was seen as a great victory for women in the kingdom, many of whom had fought for a long time for this change.

But this was also major news for the car companies.

"I don’t think in my entire career has a market opened up in this way," says Molly Peck, chief marketing officer for General Motor's Middle East operation. "Suddenly a whole new group of people — which is somewhere between 5 and 7 million people — would be given the permission to drive."

Peck and her team are based in Dubai and they wanted to get on the news quickly so they could start cranking out ads and acknowledge the major victory for Saudi women.

But there was a slight problem.

"There was a lot of discussion on exactly how we should do that," she recalls. "You know, do we talk about vehicles that may appeal to them or do we just talk about our brands?"

Not far from the Chevrolet offices, another marketing team was scratching its head.

The first car ads went out on social media within hours. Ford and Chevrolet went with a simple message: Congrats!

But as the days went on, car companies realized they had to fine-tune their messaging. They started to do more market research targeted specifically towards women drivers in Saudi Arabia. Yes, some women already owned cars but they had made their decisions based on what appealed to them from the back seat.

One of the more recent car advertisements from Chevrolet asks Saudi women a simple question: Will you drive when the ban is lifted?

Some say yes. But a good number of them say no, they won't.

Cherine Khoury shot the ad for Chevrolet and she says she was surprised by the answers. "I knew some of them would say no but I did not know the reasons why they were saying no."

Khoury, who was born and raised in Saudi Arabia to Lebanese parents, says off camera that some women told her they wanted to let some time pass before they get on the road. Just like when a new piece of software comes out and you don’t want to be the first one to download it — let the hiccups get sorted out first.

"Another one actually said that 'girls in Saudi Arabia were brought up knowing that a girl does not drive. So I won’t start driving now,'" Khoury adds. She wondered if the new decree is going to stick. What if after a couple of months the Crown Prince decides that this wasn’t such a good idea? What then?

"There’s a lot of social pressure," Khoury says, "so they just want to see how it’s going, how it’s happening before they start doing. And they’ve given it a lot of thought."

The Chevrolet ad ends with the hashtag #UpToMe.

"What really resonated with me about it as even a Western woman, a woman from the US," explained GM's Molly Peck, "it’s not so much about the decision, you know, driving or not. But it’s about the ability to make the choice for yourself."

The Saudi women who do plan to drive tend to be younger. And if you’re a car company trying to woo those customers, a college campus is a good place to start. That's why earlier this month, Ford held a driving workshop for students at the all-women Effat University in Jeddah.

"They started in the classroom, learned about a variety of things and then went to different modules," Ford's Crystal Worthem explained. "They actually got to sit in the vehicle [and] learn more about the car [like] 'this is how you engage the steering wheel and the brakes and all the elements.'"

Today we celebrate the first graduates of the Ford Driving Skills For Life for Her. Happy #InternationalWomensDay #FordDSFL #IWD2018 pic.twitter.com/vFUSbLYx8C

Eighteen-year-old psychology major at Effat University Sara Ghouth got to sit in the driver’s seat for the first time in her life.

"I was very nervous," she says over the phone from Jeddah, "I was afraid to hit the gas pedal too hard, but it was fine."

Another thing she had to get used to is what to do with her legs. "Drivers use only the right leg to drive for the gas pedal and the brake pedal — which was quite confusing."

But by the end of the day, it was all fine. It helped that Ford had hired Francesca Pardini, the Italian race car driver, to teach the students. "When they told me ‘do you want to do that for girls in Saudi?' I was really, really happy. I felt proud [that they had asked me]."

Pardini also had an important message to get across: Safety comes first.

According to the Saudi government, about 9,000 people were killed in car accidents in the kingdom in 2016 — mostly because of speeding. Now imagine a whole new group of inexperienced drivers added to the mix.

"This is really important for the teenagers to understand," Pardini says, "that driving is … a good thing for the freedom but it’s a big, big responsibility as well."

So, she told them, no texting and driving. No driving if you feel drowsy or sleepy. No alcohol. (Yes, alcohol consumption is banned in Saudi Arabia but it doesn't hurt to emphasize.)

Like all other women in Saudi Arabia, Sara Ghouth the psychology major, won't be able to drive until June. But she's already picked out a car: a Hyundai Tucson, possibly the one in Caribbean blue.