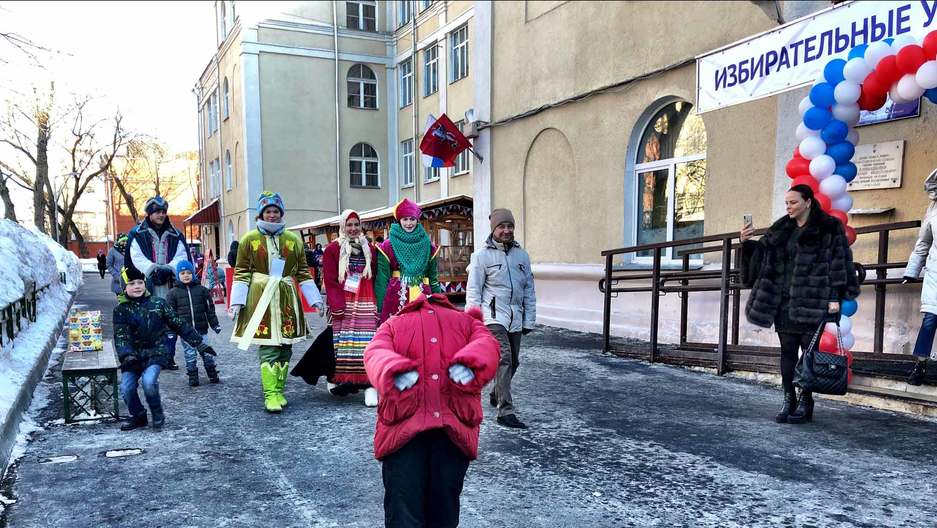 Voters play a game outside a polling place in central Moscow on Sunday, March 18. Games, free phones and other techniques are used to draw voters to the polls. Putin won the election with more than three-quarters of the vote.

The result came, of course, as no surprise.

Russian President Vladimir Putin overwhelmed his opponents in his country’s elections, taking in just more than three-quarters of the vote to extend his power through 2024.  His closest challenger, Communist millionaire Pavel Grudinin, came in a distant second with 11 percent of cast ballots.  A ultra-nationalist came in third. Pro-Western candidates barely cleared the 1 percent mark.

Tamara Kruglova, a pensioner who voted in central Moscow, argued support for the Russian leader was simply the natural order of things.

“Who did I vote for? Of course for Putin!" she said. "Because he’s the only one who doesn’t want war. He’s a good and peaceful man. And for the next six years it means we’ll have stability. The people trust him.”

The election was never about whether Putin would win, but rather, how the race would be won.

With the opposition leader Alexey Navalny barred from participating and calling for a nationwide boycott, the question was over turnout. Did the Russian president still enjoy a broad mandate after 18 years in power?

The answer appears to be a resounding yes. More than half of Russia’s 110 million registered voters cast ballots for Putin — more than in the last presidential election six years ago.

Yet behind the impressive showing were obvious machinations aimed at achieving the result. Election day had been moved to fall on the fourth anniversary of Russia’s "reunification" with Crimea. The annexation of the territory prompted Western sanctions — and a surge in Putin’s approval ratings at home.

Ballot stuffing, “carousel voting” of groups of state workers — a type of election-rigging where buses of voters are transported from one polling place to another — and other forms of state use of “administrative resources” appeared to pad the vote. Russia’s Central Elections Commission nullified results  — or was forced to, as some argued — in polling centers where obvious violations occurred.

The pursuit of higher turnout prompted a host of other creative ways to pull in voters. In some regions, the latest models of iPhones and cars were offered to voters posing for the “best election selfie.” Other polling stations offered free medical exams. Free or discounted food was also on offer — a Soviet-era election tactic that prompted no shortage of derision online.

Golos, an independent Russian election monitoring organization, registered more than 1,500 violations and declared the election neither free nor fair. International observers from the Vienna-based Organization for Security and Cooperation in Europe issued a preliminary report saying the election was “overly controlled” and "lacked genuine competition." 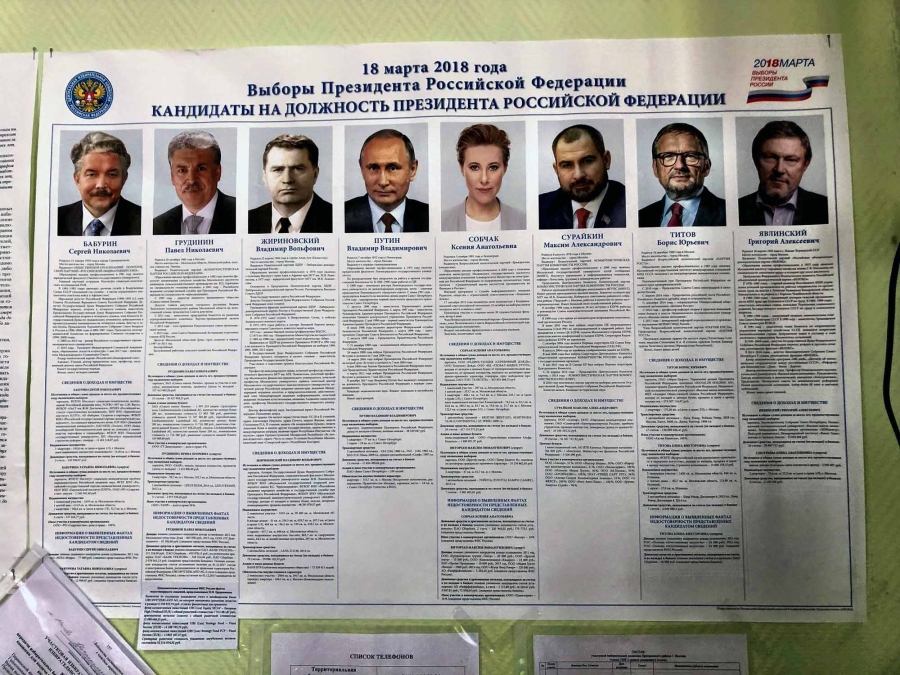 Even though Putin drew more than three-quarters of the vote, there were other candidates running, pictured here in at a polling station in Moscow. Putin’s closest challenger, Communist millionaire Pavel Grudinin, came in a distant second with 11 percent of cast ballots.  An ultra-nationalist came in third. Pro-Western candidates barely cleared the 1 percent mark.

On paper, at least, there was a competition.

Other candidates, including open critics of the Russian president, were included on the ballot. But their presence seemed primarily aimed at generating interest in the race and undermining Navalny’s boycott strategy.

If so, it worked well enough.

“I like Navalny, but I think a boycott is a bad strategy,” said Dmitry Aleeksev, 22, a first-time voter in Moscow who said he cast his ballot for liberal socialite Ksenia Sobchak. “It serves Navalny’s interests, not the voting public.”

Sobchak’s campaign in particular was a fascinating subplot. Her father, former St. Petersburg mayor Anatoly Sobchak, had been Putin’s mentor back in the 1990s. And while she campaigned for ideas and causes as a brave liberal voice, her run was plagued by rumors she was merely a Kremlin ploy to divide the opposition.

Even before polls closed, those tensions were on full display.

In a remarkable live exchange on the Navalny’s popular Youtube channel, Sobchak and Navalny argued over their respective strategies.

Sobchak pressed Navalny to admit the boycott had failed and that it was time for opposition forces to unite over their differences.

In response, Navalny tore into Sobchak as a Kremlin stooge who had deceived voters to provide Putin with what he craved most: the optics of invincibility.

It was arguably the only “real” debate of the whole election. Both scored points. And both looked lesser for it.

Putin, who did virtually no campaigning in his reelection bid, continued that tradition as the returns came in.

He made a brief appearance before flag-waving supporters outside the Kremlin that lasted a mere three minutes.

“We’re all one team,” the Russian leader said.

The square emptied as soon as Putin left the stage, despite performances by pro-Kremlin pop celebrities.

Police presence around the event was heavy. When asked what message the president had hoped to convey, a police officer mused, “He said everything will be okay…and it will be.”

With his victory securing a fourth term, Putin joins the ranks of Soviet leaders Joseph Stalin and Leonid Brezhnev for his longevity in power.

But by dominating the field, Putin has — like his Soviet predecessors — inadvertently raised concerns over the transfer of power. What happens if and when he leaves the political scene when his term ends in 2024? Indeed, would he?

At a short press conference on election night, the Russian leader scoffed at a reporter’s question that raised the possibility of his staying on as president for life.

Indeed, over his next six-year term, the Russian president confronts no shortage of challenges.

He has promised the armed forced advanced new weapons. He has vowed to bring the public social reforms and higher wages and better living standards. Confrontation with the West over Ukraine, Syria, and, most recently, the poisoning of a former Russian spy and his daughter on British soil, assures that relief from Western sanctions is unlikely anytime soon.

The election suggested that demographics, too, are a concern.  Putin voters in the election skewed older. The loyalty of younger Russians, who have only known Putin as their only president, remains less certain.

Navalny supporters, many of them students, were routinely harassed by security services throughout the campaign.  For them, the election amounted to jail time, threats and fines.

The experience posed a fundamental question: how would they change their country going forward?

For the next six years, the answer would seem to be the street.