'Sconset’s Baxter Road neighborhood, including Sankaty Head Lighthouse at its northern end. Erosion has been especially rapid in past decades along this stretch of the Nantucket coast.

Located 30 miles off the coast of New England, Nantucket is a historical gem and an upscale haven for summer vacationers. But erosion and rising seas are threatening some of its most expensive real estate.

The National Park Service calls Nantucket the “finest surviving architectural and environmental example of a late 18th-and early 19th-century New England seaport.” Back then, Nantucket grew rich on the spoils of the whaling industry. Today, it is a popular summer colony, and the historic homes have been joined by newer, but still tasteful, construction.

At the east end of the island is Siasconset — locals call it simply, ’Sconset. Its multimillion-dollar cottages have stunning views facing the Atlantic Ocean, where it comes ashore in its full ferocity. Now, the bluff on which they are built, and the beaches below, are under assault, says Mark Borrelli, a coastal geologist at University of Massachusetts in Boston. 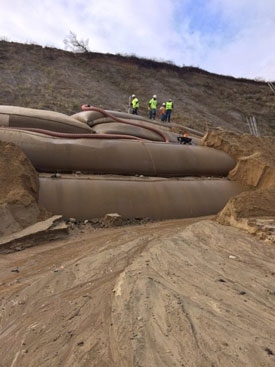 “There’s so much energy at the coast,” Borelli says. “A cubic meter of sea water weighs about one metric ton, so there’s a huge amount of mass in water. On the North Atlantic Coast, a wave will hit a beach every six seconds on average — and it’s relentless.”

These powerful waves are slowly eating away at the island. And it’s not just the energy at the coast that’s to blame: Rising seas caused by climate change, and the island’s geology, are also part of the problem. “We’re very vulnerable here,” says naturalist Peter Brace. “We’re not the rocky coast of Canada or Maine or Oregon. We’re sand.”

At ’Sconset, that sand holds up dozens of big, sturdy cottages, covered in gray cedar shingles that keep out the fierce storms that pummel Nantucket. But Josh Posner, the President of the Siaconset Beach Preservation Fund, says they’re no match for the erosion that’s creeping closer to their foundations.

“The edge of the bluff has moved back towards the road behind the houses,” Posner says. “In a lot of the places, 100 feet of the lot has now collapsed, so what used to be a 150-foot lot is now a 50-foot lot or, in some cases, even less.”

Posner and his neighbors aren’t sitting back and waiting for the waves to carry their property out to sea. After trying a few different ways of shoring up the bluff over the years with limited success, in 2013 Posner and his deep-pocketed neighbors decided to try something on a much larger scale. They began to install massive jute sandbags called geotubes.

Two hundred feet long, seven-and-a-half feet tall and 20 feet wide, the geotubes line the bluff for 1,000 feet and are stacked at an angle, four high. The geotubes are covered with sand to make the engineered bluff to a state as close to natural-looking as possible. They are designed to defy the force of the nonstop waves and stay firmly in place. 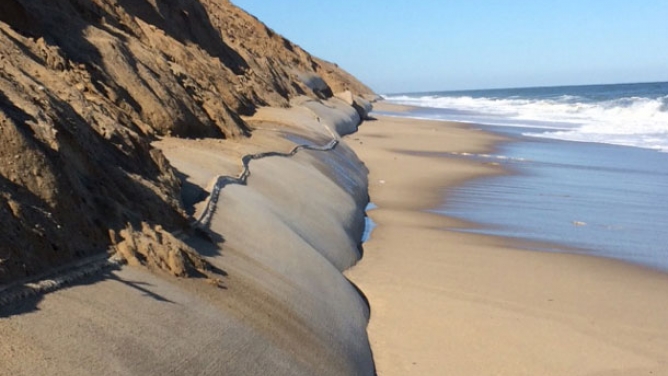 “We add on top of our geotubes the amount of sand that historically has washed away in the natural erosion process,” Posner explains, “So, the system is covered with sand almost all of the time.”

But only “almost all the time.” In the fiercest storms, like a couple of recent powerful Nor’easters, the sand covering the geotubes is washed away. After such a storm, the Siasconset Beach Preservation Fund brings in the dump trucks, carting material from sand pits elsewhere on the island. That effort, like the geotubes, is funded by the homeowners at Siasconset Bluff.

Other homeowners have had to resort to even more drastic measures. After an enormous chunk of earth fell away from her backyard, Loretta Yoder and her partner decided to move their house 34  feet back from the edge. “It was getting to the point where it just felt like, if we wanted to stay in a place and that it was secure, we needed to do it,” she says. But at some point, homeowners will run out of room.

Yoder’s part of the bluff isn’t protected by geotubes, but the Siasconset Beach Preservation Fund wants to change that. Josh Posner took the first step in January by submitting a proposal to expand the geotubes from 1,000 feet to nearly 4,000.

The choice between whether to engineer solutions to erosion and sea level rise, or to retreat, is faced by coastal communities everywhere. Sea levels are predicted to rise two to seven feet this century. Nantucket, an island of nothing more than loose, sandy material, is no match for powerful waves and rising seas in the long run, Brace says.

“We’re right where it’s going to happen,” he says. “We’re gonna go underwater before a lot of the [mainland] coastline.”

This article is based on a story that aired on PRI's Living on Earth with Steve Curwood.