The IceCube Neutrino Observatory at the South Pole

One of the world’s most sensitive telescopes is buried deep in Antarctic ice, searching for evidence of elusive, subatomic particles called neutrinos — elementary particles scientists believe are one of the building blocks of the universe.

In his new book, "The Telescope in the Ice: Inventing a New Astronomy at the South Pole," writer Mark Bowen chronicles the decadeslong project to build the IceCube Neutrino Observatory.

Ever since Galileo turned his telescope towards the heavens four centuries ago, these finely tuned instruments have produced breathtaking images of planets and other galaxies. But IceCube doesn’t “look” at anything at all, in the traditional sense. Instead, it is made up of thousands of light detectors, buried in a cubic kilometer of diamond-clear ice.

A neutrino is a fundamental particle — a basic constituent of matter — and hard to detect. “The strange thing about the neutrino is that even now nobody understands it very well,” Bowen says. “It’s at the forefront of particle physics because it is just this really weird particle.”

Researchers hope the neutrino can help explain the behavior of some of the “incredibly strange things that are being discovered far off in outer space,” Bowen says. “We have now entered an era called ‘multimessenger astronomy.’ … The neutrino would be a third messenger, besides light and gravitational waves, with which we can look at exotic things like merging neutron stars, blazars and things of that sort.”

Back in the 1970s, physicists developed the theory known as the Standard Model of particle physics, which postulates that “everything in the universe is found to be made from a few basic building blocks called fundamental particles, governed by four fundamental forces.” The most recently discovered fundamental particle is the Higgs boson, which was announced with great fanfare in 2012.

The neutrino has revealed some physics beyond the Standard Model. The model says that a neutrino should not weigh anything, but a 1998 experiment similar to IceCube showed that neutrinos do indeed have mass.

The key to detecting a neutrino is to monitor a huge volume of a clear material — ice, air or water — and watch for an interaction of a neutrino with that material, Bowen explains. When a neutrino interacts with a proton, a neutron or something else in the nucleus of an atom, the neutrino disappears; but as it does so, it “knocks out a particle" that emits light.

That particle is knocked out like a billiard ball when hit head-on with a cue ball: It travels almost exactly the same direction as the neutrino. Scientists can’t observe the neutrino itself, only the product of the neutrino’s collision.

A neutrino collision can produce several kinds of particles — the key one, for observational purposes, is called a muon. When a muon is released, it speeds through the ice and, at that moment, it travels faster than the light it is emitting. So, the muon drags a cone of light behind it. “It’s just like a boat on a lake,” Bowen explains. “The waves come off in an angle behind the boat because they can't go as fast as the boat. That’s exactly what's happening.”

IceCube’s enormous 3-D grid of basketball-sized light detectors, sunk into holes a mile and a half deep in the clear ice of the South Pole, can detect that muon’s light trail. And since the muon is traveling in the same direction as the neutrino, scientists can see where the neutrino came from and possibly see what object might have created it. In 2013, IceCube announced the first detection of neutrinos that originated outside our solar system. 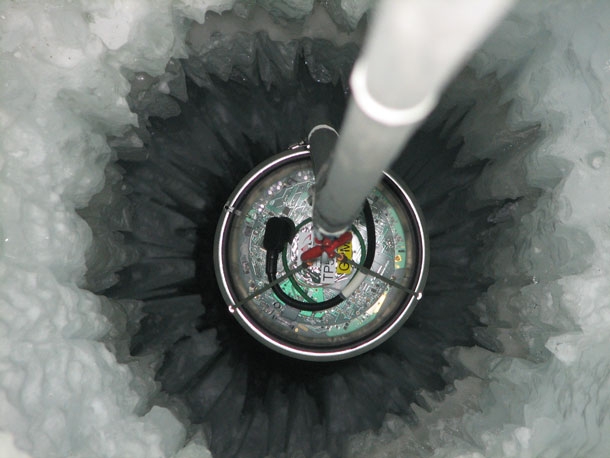 Eighty-six IceCube strings made up of 60 sensors (called Digital Optical Modules, or DOMs) had to be quickly installed before the ice completely froze around them.

IceCube, like its predecessor, the Deep Underwater Muon and Neutrino Detector (DUMONT), is buried a mile deep because the researchers want to use the massive area above the instruments as a shield to block the zillions of other cosmic ray particles that are zipping through the Earth all the time.

In fact, the instrument is actually designed to look the other way, Bowen explains. If you're standing on the South Pole, the instrument looks down. “It is looking for neutrinos that have made it all the way through the Earth and then happen to interact with the ice right near the detector, or even the bedrock below it, and set a muon zooming through the detector.”