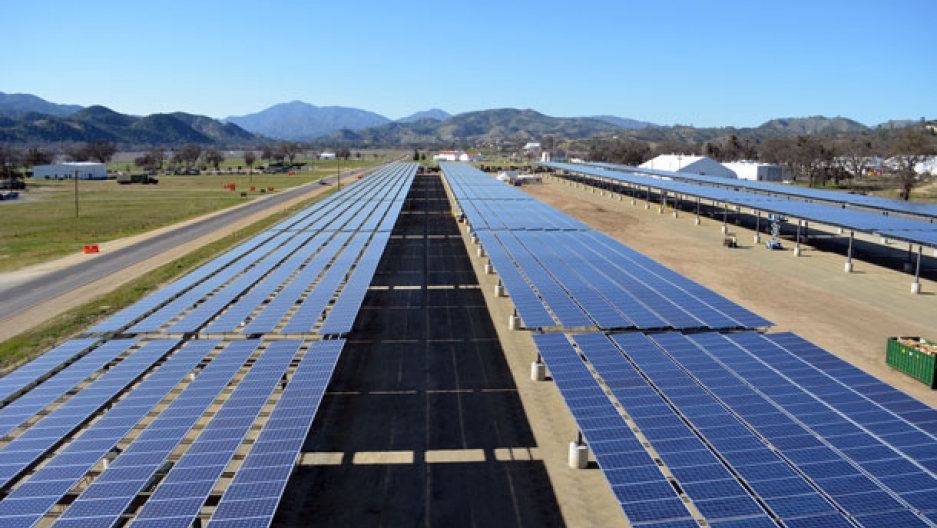 This large solar photovoltaic installation can be found in Hunter Liggett, California.

US Army Corp of Engineers

The US solar market experienced a downturn in 2017 for the first time in seven years.

Though the fall in jobs coincided with Donald Trump's first year as president, the election had no effect on the 2017 numbers, says solar expert Varun Sivaram, a fellow at the Council on Foreign Relations and author of the book, "Taming the Sun: Innovations to Harness Solar Energy and Power the Planet."

“Since 2010, the cost of solar power has fallen by over three quarters, and that's largely been fueled by cheap solar panels manufactured and exported from China and elsewhere in Asia,” Sivaram says. “As a result ... we’ve seen year-over-year growth almost every year. But then, from 2016 to 2017, we saw a dip, and a lot of commentators noted that it happened to coincide with President Trump's first year in office.”

But Trump did not cause the dip in jobs, he says. Congress’s actions had a much more direct effect.

In 2015, he explains, Congress “went down to the wire” on whether to extend an investment tax credit on solar installations. At the last minute, it extended the subsidy for five more years. But solar developers, fearing it would expire, moved up the timeline of their projects to complete them in 2016, which took many new projects out of the pipeline for 2017. The result was a temporary glut of solar installations in 2016 and a natural drop in 2017, Sivaram says.

Recently, however, the Trump administration moved to impose a tariff on imported photovoltaic solar panels. That decision could have a negative on the industry going forward, Sivaram contends. He estimates the tariff will cause an 11 percent drop in solar installations from 2018 to 2022.

“The tariffs by the Trump administration are going to raise the cost of solar power in the US,” he says, “and the increased cost will dampen consumer demand, which will lead to a loss of jobs.”

The new Trump policy won’t bring back solar manufacturing jobs, Sivaram believes. "This is kind of like closing the barn door after the horse has bolted,” he says. “Chinese state support [for their solar manufacturing industry] came a decade ago. Now, Chinese and Asian manufacturers are able to achieve low cost by themselves, without government incentives. For the US to catch up, it's not enough to put these kinds of halfhearted tariffs on imported solar panels. It won't encourage investment in the US. It'll probably reduce installations, and we’ve got to help bring them back.”

Sivaram argues that if the US wants to once again lead the industry and capture a larger share of the growing solar market, what’s needed is innovation. “I've worked on some [new technologies] as a physicist in the lab, and they are phenomenal,” he says.

Right now, the best available technology is low-cost, highly efficient, flexible coating known as perovskite solar panels. “You could one day paint your house with a solar coating,” Sivaram says. “You could wrap skyscrapers with this. You could put it on weak roofs in the developing world.”

Despite the recent loss of jobs, Sivaram believes solar power will continue to grow and could even one day become a victim of its own success. Over the next decade, he says, the increase in the amount of solar energy "is going to become very hard for the grid to tolerate.”

“When solar is 1 percent or less of total electricity, it's not that hard to integrate onto the grid,” he explains. “But what if solar gets to 10 or 20 or 30 percent? At that point, we're going to have so much solar, it'll be a nuisance to integrate this highly volatile energy source.”

The answer, he says, is new technologies and much better systems — such as cross-continental transmission grids that can take solar from places of excess to places of scarcity; or ways to intelligently turn on and off millions of thermostats, water heaters and space heaters so those households can “mop up” excess solar electricity on the grid and use it when it's available.

“There are lots of innovative systemic fixes we can make,” he says. “We really should be worried about solar collapsing under its own weight. Right now, it's growing very healthily, but in a decade or so, there could be so much that we won’t know what to do with it. Unless we prepare for that right now, we'll find ourselves in a difficult situation.”