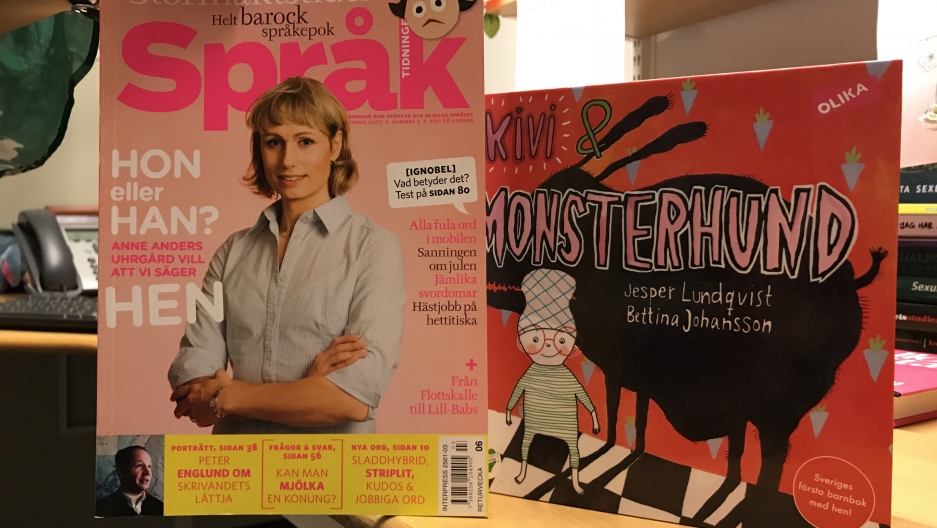 In 2007 Språk Magazine published an article about hen that raised the profile of the word. In 2012, the children's book "Kivi & Monsterhund" was published, sparking a nationwide debate about hen.

In 2012, a little known Swedish press published a children’s book that sparked a nationwide debate.

The debate wasn’t about the plot of the book or the pictures but concerned a three-letter word used by the main character of the story.

That word was the relatively new, gender-neutral pronoun hen.

Traditionally, Swedish does not have gender-neutral pronouns for people. Hen tapped into an ongoing conversation the country was already having about gender and equality.

This week on the podcast, we go to Sweden and examine whether gender-neutral language can help shape-shift societal views on gender equality.

00:01 In 2012, Olika Press, a little-known publishing company in Sweden, put out a children's book called "Kivi & Monsterhund" that sparked a national conversation. The public debate was over the word hen, a gender-neutral pronoun used to refer to the titular character, Kivi.

06:43 Where does hen come from? Swedish language professor Karin Milles breaks down the etymology.

10:55: The debate over hen comes out of a larger conversation taking place in Sweden about gender equality.

13:21 "Language is magic!" Linguist Mikael Parkvall breaks down the debates taking place over the pronoun.

19:07 Thoughts about hen from the streets of Stockholm

21:45 Theories about why hen has caught on so quickly in Sweden

27:19 What does Anne Uhrgård think about hen today?

Many thanks to engineer Tina Tobey and to Nathalie Rothschild for help in researching and interpreting in Sweden.