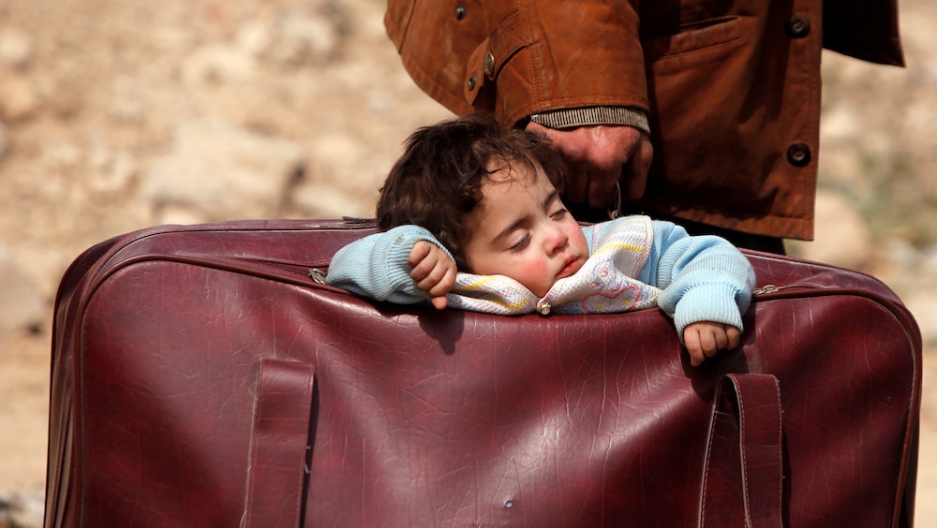 A child sleeps in a bag in the village of Beit Sawa, eastern Ghouta, Syria March 15, 2018.

Thousands of Syrians fled a rebel pocket in eastern Ghouta on Thursday and crossed by foot to army positions, the largest such outflow in almost a month of fighting, as troops seized more ground in the opposition stronghold.

Men, women and children walked along a dirt road to army lines on the outskirts of Hammouriyeh town, footage on state TV showed. They carried blankets, bags, and suitcases on their shoulders, some of them weeping. A group crammed in the back of pickup truck waved Syrian state flags.

The Syrian Observatory for Human Rights said at least 12,500 people left toward government territory. They came out of Hammouriyeh and Jisreen, which the army advanced into on Thursday, and other towns nearby, the UK-based monitor said.

It marked the first time such large crowds of people fled the enclave since the government launched a fierce offensive to recapture it nearly a month ago.

Earlier this week, smaller groups of sick and wounded people were evacuated from another zone further north, under a deal the Jaish al-Islam rebel faction that controls it and Russia.

The International Committee of the Red Cross (ICRC) said 25 aid trucks entered that besieged zone and was headed to the town of Douma. "This is just a little of what these families need," the ICRC in Syria said in a tweet.

ICRC spokeswoman Iolanda Jaquemet said the convoy, which entered through the al-Wafideen crossing with the United Nations, contained food aid for 26,100 people for one month, among other items.

The trucks had 5,220 ICRC food parcels and 5,220 World Food Program flour bags, Jaquemet said. A parcel can feed a family of five for one month.

The Syrian army seized swaths of farmland and factories in the northeast of Hammouriyeh, said a military media unit run by Iran-backed Hezbollah, which fights alongside Damascus.

Wael Olwan, spokesman for the Failaq al-Rahman rebel faction that controls the southern pocket, accused the army in a tweet of storming Hammouriyeh and exploiting the plight of civilians fleeing the bombs.

The Observatory said government warplanes and shelling had pounded the Failaq zone overnight. Air strikes on the town of Zamalka there killed 12 people on Thursday, it said.

The army's onslaught of air and artillery strikes have battered eastern Ghouta for almost a month, killing more than 1,100 people and injuring thousands more, the United Nations has said.

Damascus and its key ally Moscow say their forces only target armed militants and seek to end the rule of Islamist insurgents over civilians and to stop mortar fire on Damascus. They have accused the factions of preventing residents from leaving, which the fighters deny.

"Praise God...the families are coming out to suitable locations to the state's embrace," an army officer said on state television on Thursday.

State TV showed interviews with people crossing the front, in which they said the Ghouta insurgents had not let them out before. They were coming through a crossing in Hammouriyeh, and the Syrian Arab Red Crescent (SARC) would move them to temporary shelters in rural Damascus, it said.

Dozens of people crowded into trucks and tractors waved or chanted as they drove by. The sound of explosions briefly rang out in the background.

One man cried and thanked the Syrian army in the broadcast. Another from Hammouriyeh said militants had attacked somebody who tried raising the Syrian flag there in recent weeks. "They fired at him and brought down the flag," the unnamed man said.

The Reuters witness said some arrived at government positions in the nearby town of Beit Sawa on wheelchairs.

A Hammouriyeh resident, who gave his name as Abu al-Nour, told Reuters the had been in contact with people in army territory since the offensive started to get civilians out.

"For eight days, we have coordinated with the soldiers, telling them we want to get the civilians out," he said.