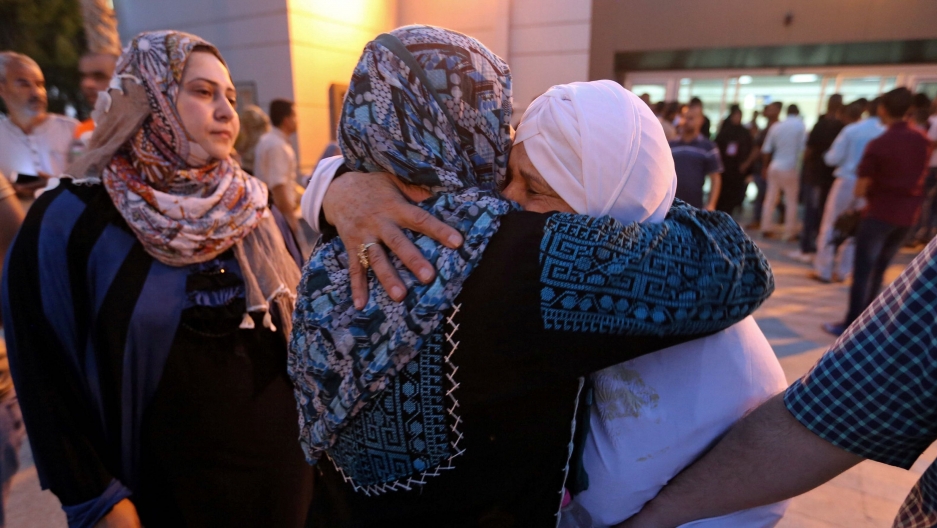 A Palestinian woman is hugged by her daughter upon her return from the annual Haj pilgrimage in Mecca, at Rafah border crossing in the southern Gaza Strip, Sept. 12, 2017.

Nearly 2 million Muslims take part in the pilgrimage to Mecca each year.

Egyptian journalist and author Mona Eltahawy first participated in the five-day pilgrimage when she was a teenager and something happened that still haunts her today — she was sexually abused.

Following the momentum of the #MeToo campaign, Eltahawy set in motion #MosqueMeToo, to tell her story and to encourage other Muslim women to step forward and share their experiences of sexual abuse while on the Muslim pilgrimage.

She spoke to The World's Marco Werman about the movement.

The World: Mona, what sparked this need for #MosqueMetoo?

Mona Eltahawy: In early February, I read about a young, Pakistani woman called Sabica Khan and a Facebook post that she created about being sexually harassed at Islam's holiest site in Mecca in Saudi Arabia. Now, this was a sadly familiar story to me because back in 1982, when I was 15 years old, my family had just arrived in Saudi Arabia. On the Muslim pilgrimage, the hajj, and I was sexually assaulted twice.

I've shared this story with several Muslim women but to read about Sabica Khan's experience and to read that ... so many women were still going through this awful experience of being violated in our holiest site ... really upset me. So, I began a new thread on Twitter, and I asked fellow Muslim women around the world to share their experiences on the #MosqueMeToo.

I have shared my experience of being sexually assaulted during Haj in 1982 when I was 15 in the hope that it will help fellow Muslim women break silence and taboo around their experience of sexual harassment/abuse during Haj/Umra or in sacred spaces. Let’s use #MosqueMeToo https://t.co/uDsZFDolgX

What kind of responses did you receive?

They were incredible because very soon after I created #MosqueMeToo, Indonesia — which is the world's largest Muslim country — woke up to it and the hashtag began to spread like wildfire. Many tweets would be saying, "Oh my goodness! I had no idea this was happening. Is this true? Is this happening?" And then Indonesian women, Muslim women in India and Pakistan began to tweet about this, and then Muslim women in Turkey and in the Middle East ... And so on and so forth.

It quickly went viral and the responses were, you know, very sad, obviously, and heartbreaking. But at the same time, it was really encouraging because Muslim women have a voice. And if we don't hear that voice, we have to ask why? It's not because they're voiceless ... it's because they're not often given a platform or usually, the men of the community pretend to speak for all of us. So, I love the way that Muslim women took on #MosqueMeToo. And to this day — you know, it's more than a month later — Muslim women are still posting.

Did you get any response from Muslim men? Did they get defensive?

Many. The first was "you're just trying to make Muslims look bad." You know, [the attitude is] "there's nothing in this for me." It's incredibly difficult to expose or to reveal that you were sexually assaulted under any circumstances. So, that was obviously ridiculous. Others accused me of being a Zionist agent. Others accused me of getting money from all kinds of people and groups that they claim hate Muslims. And this, of course, was just an attempt to shut this down.

My message to all of them was, "It's not me or any of the Muslim women who make Muslims look bad. It's Muslim men who sexually assault women who make us look bad." Now, to their credit, some Muslim men have written back and said, "I'm so sorry this happened to you. Because of your movement, I began to talk to my mother, my sister, my daughter, you know and I've discovered to my horror that this happens and we must have this conversation more and more."

And that is really what one of the goals of this movement has been. This is not about how a woman dresses. This is not about where a woman was. It's not about sacred space or secular space. This is about patriarchy — enabling and protecting misogyny that allows men to sexually assault us. Whether it's in Mecca when I'm on pilgrimage or a nightclub.

You know, less than a month after I began #MosqueMeToo, I began another hashtag called #IBeatMyAssaulter because I was sexually assaulted in a nightclub in Montreal, Canada. And this time around, I grabbed the man who sexually assaulted me, and I punched him between 10 to 15 times. I beat him up in self-defense and it was glorious.

You literally beat your assaulter?

What was his response?

I think he was not expecting this because he grabbed my ass and then quickly walked away. I turned around in the club, and I could tell who he was because it was all couples ...  around us. There was this solitary man walking away so I knew immediately it was him. I grabbed him by his shirt and I think he was so taken aback that he stumbled. And I sat on top of him and he basically protected his head as I was punching him. He didn't try to fight back.

You know this is an interesting thing because I've thought about this so many times, since. He thought it's acceptable for a man to grab a woman's backside in a club. But he didn't stand up or try to stand up and punch me because it's not acceptable to punch a woman — in public anyway. So, why is it acceptable to grab her backside but not to punch her?

For whatever reason, I took advantage of that and I pinned him down and I punched him. I was yelling at him, "Don't you ever touch a woman like that again." And it was literally the rage of 50 years. And I think that this hashtag movement is really an important lesson to patriarchy and to people around the world that there is a growing wave of women's rage. We are putting men on notice that we are done.

When is the next Hajj? And how do you want Muslim women to carry #MosqueMeToo into Mecca?

The next hajj will be sometime in August. And I have a message to my Muslim sisters, and it saddens me to say this: "You're going to go on this very special pilgrimage where it's the fifth pillar of our religion. And many of you, just like I did when I was 15, will think that you're going to the holiest place in the world and therefore you will be safe. And sadly that's not the case. Prepare yourself for sexual assault."

I would like the women guards that they have positioned across the holy sites to do more than just yell at women about making sure that we're covered up properly. I would like them to train Saudi police officers to be better prepared to help women who want to report sexual harassment and assault. And this is incredibly important: I would like the imam of the Grand Mosque — ideally the week before hajj — to give a sermon from the Grand Mosque in Mecca saying, "Islam demands the respect of women. Islam demands the equality of women and men and in Islam, you cannot sexually assault a woman anywhere — especially in the holy site."

That would send such a powerful and incredible message around the Muslim world.

Listen above to hear the full interview with Mona Eltahawy, an Egyptian journalist and author of the book, "Headscarves and Hymens: Why the Middle East Needs a Sexual Revolution."