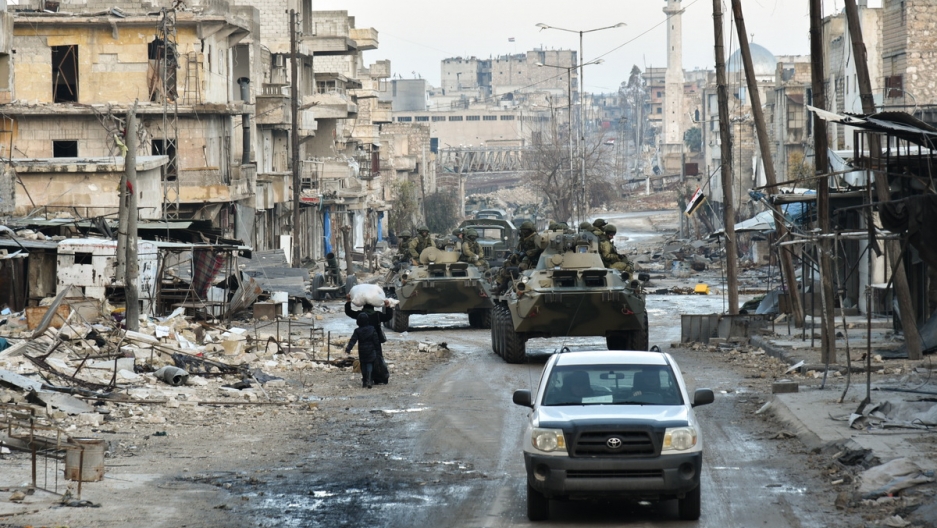 Pedestrians walk down a street alongside armored vehicles in wartorn Aleppo, Syria.

Seven years into a brutal civil war in Syria, we are reminded how fragile states can lead to regional instability, cause humanitarian crises and fall prey to extremist organizations, such as ISIS. How can the US and the international community address these national security challenges?

That's the focus of our upcoming live town hall discussion, "Foreign Policy and Fragile States." Our lead panelist is Nancy Lindborg, president of the United States Institute of Peace, who has spent most of her career working in fragile and conflict-affected regions around the world. The following interview with Lindborg is a preview of the town hall discussion.

Members of the public are invited to attend the live event in Washington, DC, on March 19 at 2 p.m. Just register here.

You can also watch our live stream of the event in the video below and join the discussion online by tweeting with the hashtag #StateFragility.

Lindborg answered some of our questions recently in advance of the event.

Rob Sachs: The Trump Administration has been advocating for more hard power than soft power, and with aims to drastically cut the budget for the State Department and USAID. What is the consequence of this approach from the perspective of fragile states?

Nancy Lindborg: As hundreds of retired four-star generals have testified before and written to Congress, American security is deeply compromised without diplomacy and development assistance. The threats we face are not solved by military action alone, which is underscored today in Iraq, where the military campaign is over, and now the hard work of consolidating those gains must begin.

Most important now will be the diplomatic and assistance efforts that help Iraqis rebuild a more inclusive society, without which there is a high likelihood of relapsing into terror and violence.

Former Secretary of State Rex Tillerson has said of Syria that he does not want to engage in nation-building but does think that the US should be creating the conditions for stability in the region. What’s the difference between the two and how does the United States come up with an exit strategy?

The Trump Administration has an allergy to nation-building, which makes sense. A key lesson of the past two decades is that nation-building must be locally led and takes times, often decades. But there is vitally important help that fragile and war-torn countries need in both the immediate and longer term. In Syria, still in the grips of civil war, the most critical need is stabilization, much like a bleeding patient in an emergency room.

First the fighting must stop, then people must have the security and basic infrastructure to return home and start the long process of rebuilding their lives and communities. This must include basics, like shelter, water, and electricity, as well as help to reconcile a deeply fragmented society — without which conflict will likely return. Syria will take decades to reconstruct — estimates top $250 billion — and will require the help of many nations. While it is not the responsibility of the United States government to conduct nation-building in Syria, it is in our interest to stay engaged until the country is well on the way to a sustainable peace. This engagement will and must take many forms through the years, not only financial assistance.

What is the moral obligation of the US to help failing states? Does the United States have the resources to help places that don’t have immediate strategic interests for the US?

It is in both our national security interest and in line with our values to help fragile states. We have seen what happens when pandemics, like Ebola, or terrorists, like ISIS, emerge from states that either lack the capacity to manage threats or are themselves the problem, through repressive tactics towards their citizens. The United States government clearly doesn’t have the resources to help all fragile states, and not every fragile state presents the same threat. But there is a history of unexpected threats emerging from unexpected places, as we learned from Afghanistan, which is why working with partners and alliances that share our values and vision is the smart strategy.

What is the role of the UN and the world community in helping out? How does the US see itself as an actor working within the UN?

In addressing violent conflict, success is rarely accomplished by American action alone. This is why partnerships are essential, including those with the United Nations and others, such as the World Bank, as well as our alliances rooted in shared values, such as NATO. With a worrying increase in conflicts since 2010, these partnerships should be revitalized and strengthened.

What do you think the future holds for Syria and other places around the world struggling to provide security and basic needs for their citizens?

Security and basic needs are necessary but not sufficient for fragile states struggling to escape instability and violence. The evidence is clear that when people and groups are systematically excluded from opportunities and participation in governance, and when people have no trust in often corrupt and unaccountable governments, there is a much greater chance of falling into poverty, violent conflict, and extremism. Fragile states are also much more vulnerable to the destabilizing influences of regional and global powers, which is starkly evident in both Syria and Iraq.

I’m fundamentally an optimist and take heart from a recent visit to Iraq, where I saw the determination of people from so many walks of life, especially the younger generation, to rebuild their country and demand more from their leaders. It will be a very long road, and they will need help, but there is the potential for peace.