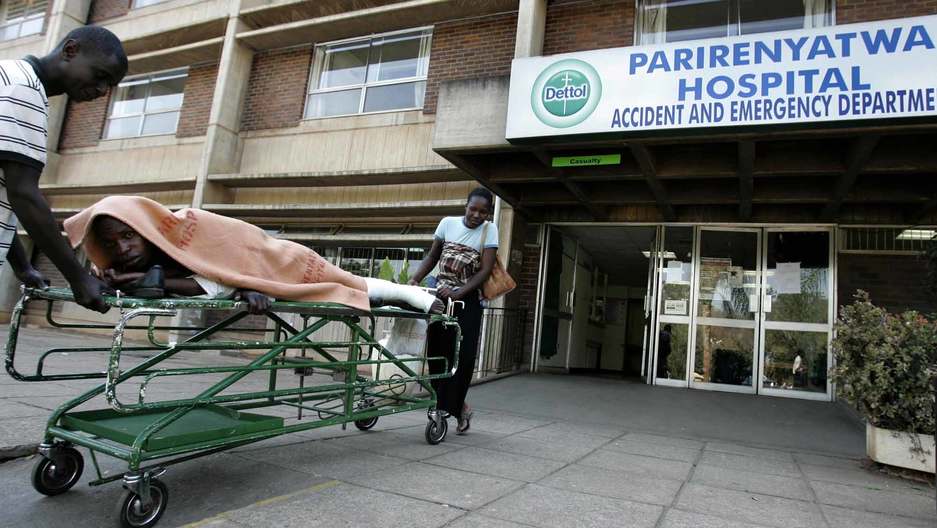 A patient is taken home on a stretcher by his relatives from Parirenyatwa hospital's accident and emergency ward in the Harare, Zimbabwe in this 2009 file photo. State doctors, who earn a basic wage of $170, started a job boycott last week demanding $1,000 per month, paralyzing operations at the country's four major hospitals in Harare and Bulawayo.

Doctors at public hospitals across Zimbabwe have gone on strike and will not return to work until the government meets their demands for better pay and working conditions, a spokesman for a doctors' unions said on Tuesday.

The action is the first major labor dispute under President Emmerson Mnangagwa, who replaced Robert Mugabe in November and whose biggest challenge is fixing Zimbabwe's economy ruined by decades of severe mismanagement.

Related: How Robert Mugabe became Zimbabwe's leader and clung on til now

"The main issue we have raised currently is that it does not make sense for us to continue working in hospitals that do not have any drugs or sufficient equipment," said Mxolisi Ngwenya, spokesman for the Zimbabwe Hospital Doctors Association (ZHDA), which represents more than 1,000 members.

Junior doctors in Harare went on strike on March 1. As of Monday, the labor action had spread to include all public hospitals in the country, Ngwenya said.

The government had not, as agreed four years ago, increased on-call allowances for doctors to $10 an hour from the current $1.50, and has failed to fulfill other promises for better compensation and working conditions, Ngwenya said.

Junior doctors, who earn a basic monthly salary of $329 before allowances, according to Ngwenya, were yet to get duty-free vehicles as agreed previously.

In neighboring South Africa, which attracts the most skilled labor from Zimbabwe, including health workers, junior doctors on internship earned the equivalent of $2,834 last year, according to Business Day newspaper.

Health Minister David Parirenyatwa said the government was resolving some of the grievances by the doctors and urged them to return to work while waiting for the outcome of a meeting scheduled for Thursday morning.

In the past, the government has deployed army medics to work at major public hospitals when junior doctors went on strike.

At Parirenyatwa, the largest public hospital in the capital, Reuters witnessed hospital staff turning away some patients.

A nurse who only identified herself as Eunice said they were overwhelmed without the junior doctors. Most senior doctors run private practices.

"I was told to go to a (council) clinic because they don't consider my condition an emergency," said Langton Sithole, 39, who said he fractured his arm when he fell from a bicycle.