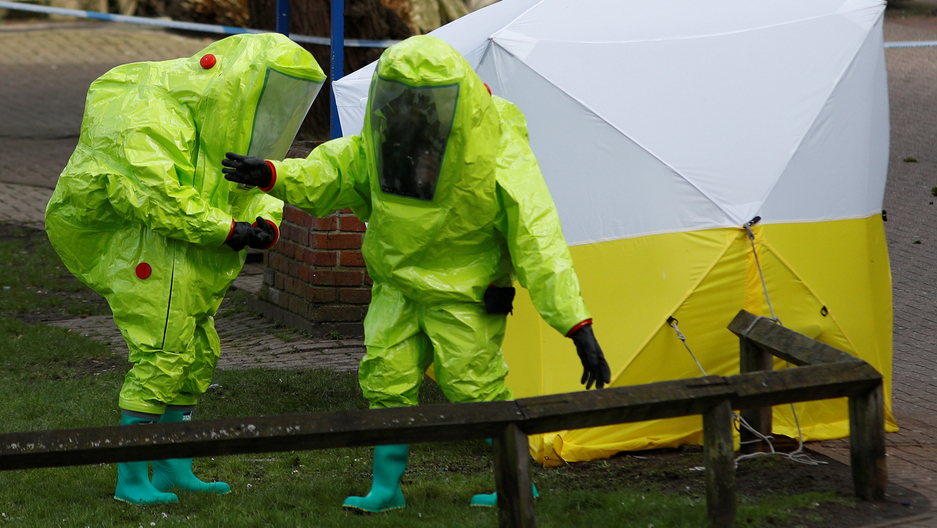 Officials working where Sergei Skripal and his daughter Yulia were found in Salisbury, Britain.

British Prime Minister Theresa May told parliament on Monday that is was "highly likely" that Moscow was directly responsible for the poisoning of former double agent Sergei Skripal and his daughter or it had allowed the nerve agent to get into the hands of others. London has given Russia until the end of Tuesday to explain its use.

British officials had identified the substance as being part of the Novichok group of nerve agents that were developed by the Soviet military during the 1970s and 1980s, May said.

Skripal, 66, and his 33-year-old daughter, Yulia, have been in hospital in critical condition since being found unconscious on a bench outside a shopping center in the city of Salisbury on March 4.

"Should there be no credible response, we will conclude that this action amounts to an unlawful use of force by the Russian state against the United Kingdom," she said, calling the attack a "reckless and despicable act."

Russia's foreign ministry hit back immediately, saying May's comments were a "circus show" and part of a political information campaign against Russia.

NATO Secretary General Jens Stoltenberg said the use of any nerve agent was "horrendous and completely unacceptable" and "this incident is of great concern to NATO."

Relations between Britain and Russia have been strained since the murder in London of former KGB agent Alexander Litvinenko, who died in 2006 after drinking green tea laced with radioactive polonium-210.

On Monday, May said the latest poisoning took place "against a backdrop of a well-established pattern of Russian state aggression" and that Britain was ready to take "much more extensive measures" against Russia than in the past.

Russia's ambassador to London has been summoned to explain to British Foreign Secretary Boris Johnson how the nerve agent came to have been used.

"On Wednesday we will consider in detail the response from the Russian state," May said.

Novichok agents are believed to be five to 10 times more lethal than the more commonly known VX and Sarin gases. They cause a slowing of the heart and restriction of the airways, leading to death by asphyxiation, University of Reading pharmacology professor Gary Stephens said.

Russian President Vladimir Putin brushed off a question about the affair while visiting a grain center in southern Russia, saying British authorities should first "get to the bottom of things," the BBC's Moscow correspondent wrote on Twitter.

Kremlin spokesman Dmitry Peskov said Skripal worked for British intelligence and the attack happened in Britain so it was not a matter for the Russian government.

A British policeman who was one of the first to attend to the stricken spy was also affected by the nerve agent. He is now conscious in serious but stable condition, police said.

Skripal is a former colonel in Russia's GRU military intelligence who was convicted of passing secrets to Britain's MI6 intelligence agency and later exchanged in a spy swap.

The chairman of the British parliament's foreign affairs committee, Tom Tugendhat, said Russia's so-called oligarchs, who have amassed fortunes during Putin's 18-year rule, should be denied entry to the luxuries of London and the West.

The British capital has been dubbed "Londongrad" due to the large quantities of Russian money that have poured in since the collapse of the Soviet Union in 1991.

May said last year that Putin was seeking to undermine the West and the international order by meddling in elections, and  promised to ensure corrupt money did not flow into Britain from Russia.

A British public inquiry found the 2006 killing of Litvinenko had probably been approved by Putin and carried out by two Russians, Dmitry Kovtun and Andrei Lugovoy — a former KGB bodyguard who later became a member of the Russian parliament.

Cordons remained in place in the center of Salisbury and some police investigators wore full chemical and biological suits. The army was later deployed to help remove items from the scene.

Health officials said there was no wider risk to public health.

Jenny Harries, deputy medical director at Public Health England, suggested members of the public who had visited the same restaurant and pub as Skripal and his daughter on March 4 should wash their clothes, clean phones and bags with baby wipes and wash items such as jewellery and spectacles with warm water and detergent.

By Alistair Smout and Michael Holden/Reuters