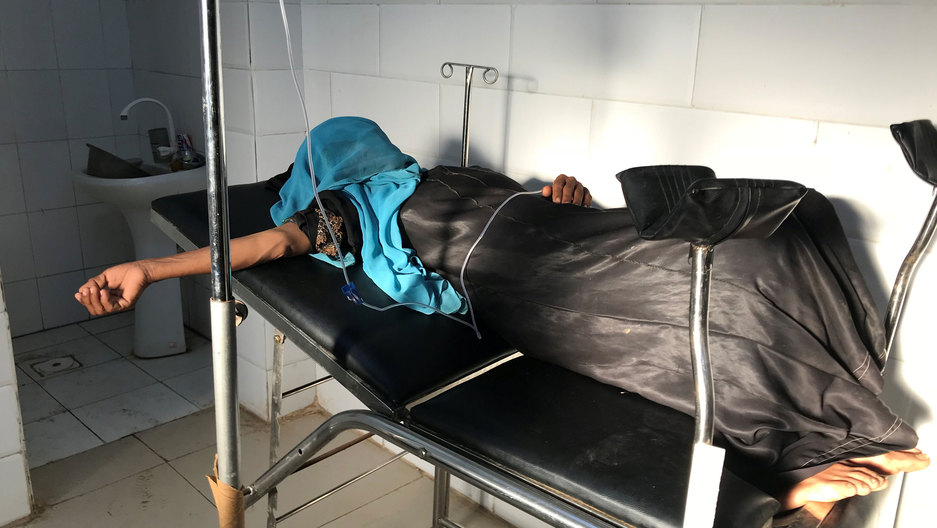 A displaced Yemeni woman lies at Al Mokha hospital in Yemen in March 2018.

It took Seham Ali Ibrahim one month to make the dangerous journey from her village near the frontline town of al-Heiss to the relative safety of Yemen's western coast areas, often traveling by foot across battle lines.

Now, she lives in a straw hut with three other families, including nine children, outside al-Mokha where many displaced Yemenis have built makeshift shelters and rely on aid provided by humanitarian organizations and anti-Houthi coalition forces.

"We walked ... We rode donkeys and cars ... We made it to al-Mokha in a month," said the elderly Ibrahim, who does not know her exact age.

Yemen has been devastated by three years of conflict in which President Abd-Rabu Mansour Hadi’s government, backed by the Saudi-led Arab coalition, is fighting to drive the Houthis out of cities they seized in a series of operations since 2014.

Al-Mokha, located some 47 miles north of the strategic Bab al-Mandab strait, and neighboring al-Khoukha and al-Heiss are among the few towns conceded by Houthi fighters since Yemen's civil war started in 2015 after the armed group forced Hadi into exile in Saudi Arabia.

"Most displaced people are coming from the areas of fighting in al-Heiss district (some 55 miles away) ... the situation is very critical," she said during a visit to al-Mokha hospital, the only medical facility in the coalition-controlled western coast.

Last month, the United Nations said at least 85,000 Yemenis had left their homes in the area since fresh fighting erupted in December 2017.

Doctors and medical staff at al-Mokha hospital are struggling on a daily basis to provide aid and treatment for victims of the war and diseases.

Across Yemen, millions of civilians are trapped under heavy coalition air strikes, as well as a crackdown by the Houthis. Famine, cholera and diphtheria affect about eight million people, including two million severely malnourished children.

Haynam Salem, 40, lay in pain on an old examination table in a dusty room in the civilian wing of al-Mokha hospital after losing her five-month-old fetus shortly upon arriving in the town with her children from al-Hameli village in Taiz province.

Plastic water bottles are being used as serum injection bags in the facility hit by shortages of medical supplies.

"The procedure to take the dead fetus out of her womb is not very complicated, but I am waiting to get some blood and I need at least two pounds," said Abderrahim al-Dhabi, a doctor working with the World Health Organization and the Arab coalition. “Hopefully, tomorrow I will get some.”

Nurses said the hospital lacks basic primary care, including a maternity doctor, and that they hadn't been paid for five months.

“We asked the coalition for help, we asked international organizations but nobody seems to care,” said Maymouna Ali Ahmed, chief nurse in charge of maternity care at the facility.

Outside the hospital, sandstorms swept the main unpaved street of the town, with thousands of used plastic bags covering the bushes and other desert vegetation.

The local power plant has started to run again but is producing only five megawatts (MW), far below its capacity of 160 MW produced before the war.

Displaced Yemenis are not the only ones relying on aid.

Workers at the power plant said the managing director of the plant paid them in cash on a monthly basis, but that for the last year their pay had been slashed to 24,000 Yemeni riyals (around $40) down from 60,000 riyals.

Fishing, the main source of income for the majority of local residents, remains subject to approval from coalition forces. Several fishermen said they were allowed to sail only once or twice a week.

A coalition commander said that sometimes fishermen were not allowed to venture out to sea “for security reasons”.

“At least the Houthis had no issue with our fishing boats,” one fisherman said, while he was waiting in a queue to collect aid distributed by the UAE Red Crescent.