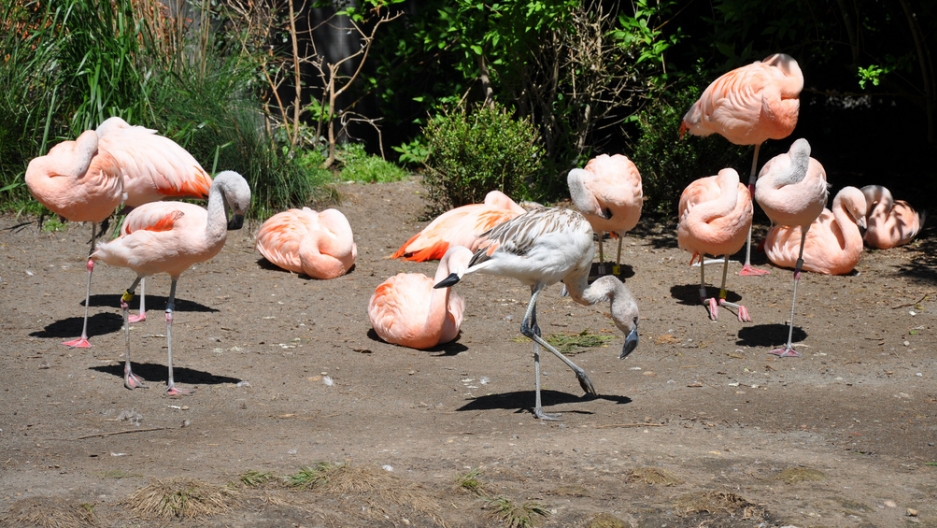 Flamingos have enjoyed a resurgence in Florida over the last 50 years. Notice that the young flamingo in the middle is gray and not the iconic pink. Flamingos gain their pinkish color over time through their diet — mainly shrimp.

Florida. Flamingos. The alliteration rolls right off the tongue. Yet for years there has been a question raised about whether the birds are actually native to the Sunshine State — a situation that could have major implications for the management of the species.

Steven Whitfield works as a conservation biologist at Zoo Miami. He was the lead author on an academic paper that was recently published in the American Ornithological Society’s journal The Condor as a way to answer that question.

Before his team began the research, there was one group of ornithologists that would insist that the flamingos seen around Florida were not native but rather had escaped from captive populations. On the other hand, there is another group that was certain that flamingos had been in the southern parts of the state, but were hunted out of their native habitats.

“So when people were trying to make recommendations with what to do with the flamingos you basically have two different — really different — management perspectives: Introduce species you try to control to keep them from causing problems in the environment, whereas with a threatened species the ideal management is some kind of population recovery,” Whitfield says. “It was somewhat surprising that for such an iconic species, this information was not really clear.”

Upon digging into the case, Whitfield and his colleagues discovered that there were indeed large flocks of flamingos — up to thousands in one group — that roamed the Florida Keys. At the same time, at the end of that century, bird feathers became a very fashionable item to have on women’s hats. This lead to a surge in hunting for flamingos in South Florida, solely for the bright pink feathers, Whitfield says.

Furthermore, the research team found a large number of flamingo eggs that had been in the collections of various history museums — a reflection of the trend of collecting wild bird eggs in the 1800s.

“We were able to find four egg collections of flamingo eggs from Florida, which seems to suggest that they weren't just birds passing by but they actually were resident birds that nested within the state,” Whitfield says.

At the same time, many naturalists in the 1800s mentioned in their writings about the increase in people hunting flamingos — this time for their meat.

“So it was pretty clear that what drove the flamingos out of Florida was the hunting pressure by people,” Whitfield says.

Over the last 50 years, Florida has experienced a swell in the number of flamingos found between its borders. Whitfield says there are two reasons that have been proposed, the first being growing introduced population. The second — and more likely scenario, he says — is that the birds are returning home to Florida from breeding colonies in mainly in Cuba, Mexico and the Bahamas after being hunted for more than 100 years.

Whitfield says that there has been a banding program in which leg bands were put on flamingos as chicks in the past 10 years there’s only been two individual birds that showed up in Florida with leg bands indicating they came from Mexico.

“So this is pretty clear evidence that there are wild birds flying into the state and we probably shouldn't treat them as a non-native species,” he says.

Furthermore, there is simply not a lot of evidence to say that they escaped from captivity, Whitfield says.

“The largest group of flamingos in Florida in the past probably past 100 years has been 150 individuals,” he says. “If someone had 150 flamingos and they all disappeared, they would probably notice."

Whitfield and his colleagues are currently in the process of using genetic testing to continue their search into the origination of the flamingos that have thrived in Florida for the last 50 years by comparing the genes to the flamingos found in Florida to those found in the Caribbean. The group is also working on stable isotope ecology to differentiate between wild versus captive birds as well as satellite telemetry.

Whitfield says that there is definitely a lot of interest in getting to the bottom of the flamingo question, given their iconic status in Florida.

"There certainly is but it's so far somewhat of a mystery,” he says.