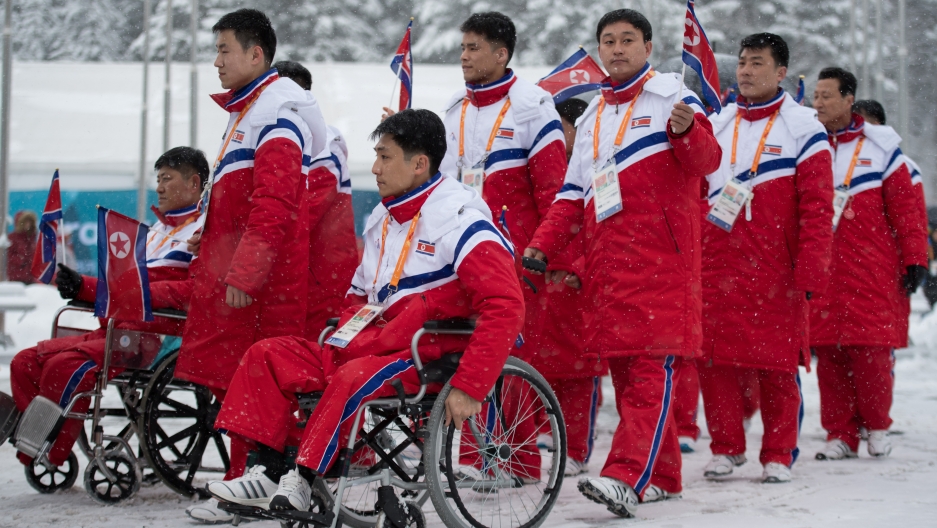 The delegation and the team of North Korea arrive at The Paralympic Village in Pyeongchang, South Korea, March 8, 2018.

For the first time, North Korea has sent athletes to compete in the Winter Paralympics.

The North’s team received a warm welcome as they entered Pyeongchang’s Olympic stadium on Friday. Thousands of LEDs placed throughout the stands glowed red, blue and white to form the shape of the country’s flag — a display that if for any other occasion, would be illegal in South Korea.

“We hope their participation will highlight further the abilities of athletes and help to change attitudes towards disability not just in North Korea but around the world,” IPC spokesperson Craig Spencer told PRI in an email.

Related: Two Koreas will march together at the Olympics

North and South Korean athletes were set to march together at Friday's opening ceremony under a unified, blue and white Korean flag — perhaps a broader sign of thawing relations. But Thursday evening, the Koreas decided to march separately.

For Kim Jong-hyon and Ma Yu-chol, North Korea’s first winter Paralympians, participating in sports has given them greater confidence. That’s according to Sue Kinsler, a Christian missionary who is one of the few foreign nationals who has gotten to know them.

Kinsler, a naturalized US citizen who was born in Seoul, has for the past 20 years been involved in sports and arts programs for the disabled in North Korea. 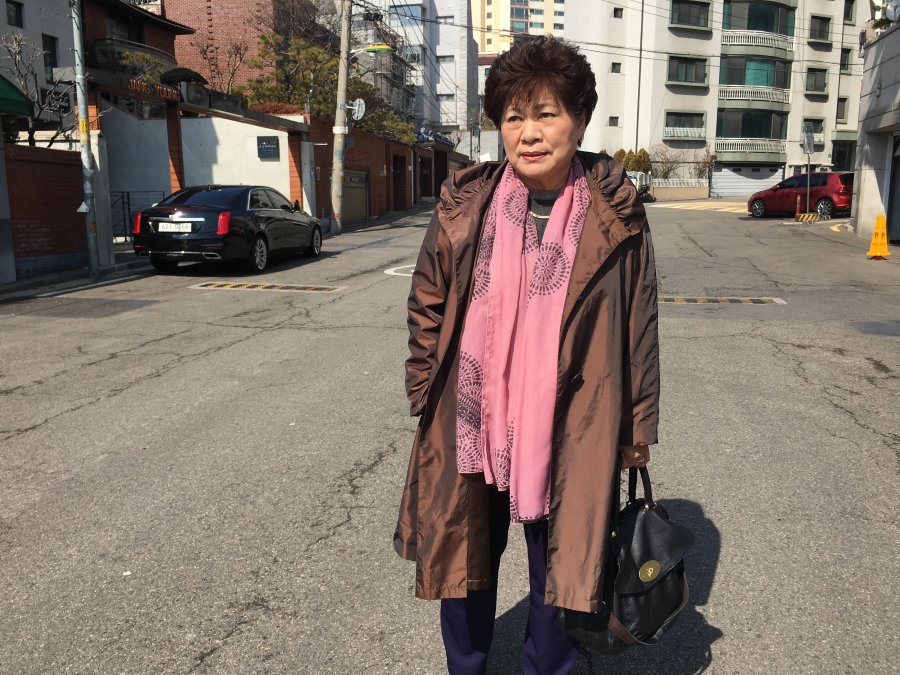 The two men each underwent amputations after childhood accidents, which led to them feeling “isolated and without many friends” growing up, Kinsler said.

Kim and Ma only learned how to ski this winter. They felt “challenged” to try a new sport after watching videos of winter Paralympic events last spring, Kinsler says: “We just had to wait until it snowed.”

Kinsler provided the athletes with donated skiwear and specialized boots. The IPC, with approval from Pyongyang’s Korean Federation for the Protection of the Disabled, sent Kim and Ma to China for training. In January, the athletes competed in the World Para Nordic Skiing World Cup in Germany — enabling them to qualify for Pyeongchang.

North Korea does not normally make its athletes available for interviews, and not much is known about the Paralympians. If interviews are granted, they must take place in the presence of government officials.

But in a rare talk with the BBC during the Germany World Cup, Ma, who Kinsler says is 27 and competed in table tennis at the 2014 Asian Para Games in Incheon, South Korea, said he aspires to help others with disabilities “fulfill their full potential."

Kim, said to be 18, said in the same interview that as a child, he dreamed of becoming an athlete. But after his accident, “I thought I would never be able to achieve my dream."

Related: With threat of war looming, North and South Korea to hold summit

In its 2017 world report, Human Rights Watch called North Korea “one of the most repressive authoritarian states in the world” and cited its use of public executions, arbitrary detention and forced labor to demand “fearful obedience” to the regime.

The country’s opacity has made it difficult for outside monitors to discern if North Koreans with disabilities are victims of state-sponsored abuse or negligence, as reports trickling out of the country seem to indicate.

However, Pyongyang showed unprecedented openness last year when it invited Catalina Devandas-Aguilar, the United Nations Special Rapporteur on the rights of persons with disabilities, to enter the country and meet with officials and disabled citizens.

Her findings will be presented during the 37th session of the UN Human Rights Council, which is underway.

Media reports, mainly citing North Korean refugees, suggest persons with disabilities are banned from living in the capital or even euthanized at birth.

Some international humanitarian groups with access to the closed-off state dispute these accounts.

“I’ve never seen such horror stories,” says Katharina Zellweger, heads of the Hong Kong-based NGO KorAid and a visiting fellow at Stanford University’s Center for International Security and Cooperation. She has visited schools for the blind and deaf in Pyongyang.

While some areas need improvement, such as care for people with intellectual challenges, Zellweger says she has seen “a lot of positive changes” and that people with a disabilities are “becoming much more visible."

One sign of progress is the new wheelchair-accessible parking spots and restrooms at Pyongyang’s new international airport.

Because North Korea sees itself as a “socialist paradise,” he says, for many years it didn’t “acknowledge the existence” of disabled people. By improving accessibility, he adds, Pyongyang recognized it could signal that it also respects overall human rights.

Kwak does not think North Korea’s commitment is just for show: “It’s sincere,” he says.

And he sees signs that the deeply embedded social stigma is paying off: “They are not seen as useless anymore and are just like everyone else."

Related: Chloe Kim's immigrant success story is everywhere — but it's a 'double-edged sword' for immigrants

While disability advocates interviewed for this story praised improving conditions for North Korea’s disabled, when asked about other human rights concerns, including reports of gulag-like prison camps and the persecution of Christian converts, they demurred and indicated that these are “political” or “sensitive” matters.

“It’s better to help them improve than judge them and make the situation worse,” Kinsler says.

Some observers caution that hesitation to address other well-documented human rights issues suggests organizations might not be revealing a full picture of conditions on the ground.

Kim Seok-hyang, a professor of North Korean studies at Seoul’s Ewha Women’s University, says it would be difficult for these agencies to maintain their relationship with Pyongyang and be permitted access to the country if they were on record criticizing any aspect of North Korea.

She also warns that the “rosy picture” that some groups paint regarding their endeavors in North Korea are aimed at enticing donors to fund their projects.

Kim is researching perceptions of disability in North Korea based on interviews with defectors in South Korea.

She says that while recent government-led efforts to support these individuals is a good step forward, “it’s still too early“ to determine if prejudice toward persons with disabilities has actually diminished.