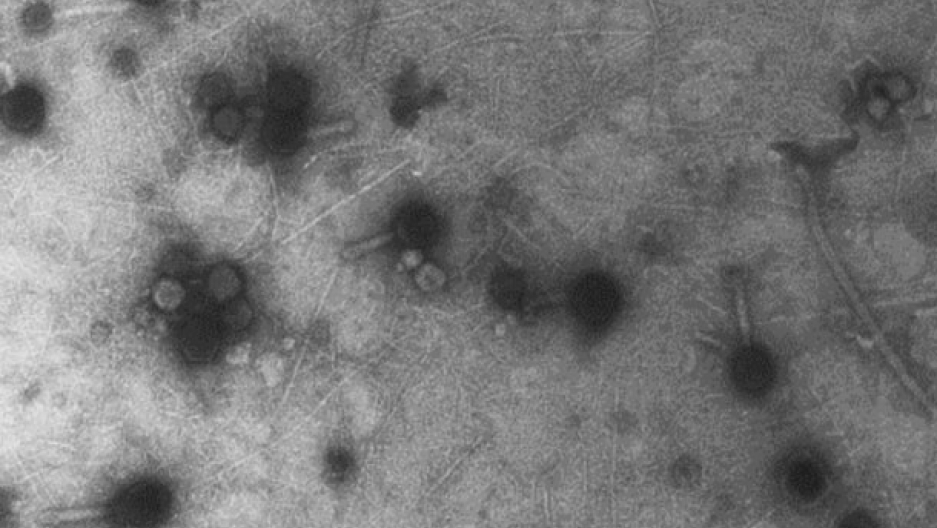 A transmission electron micrograph (TEM) of virus particles in seawater. These get swept up from the surface of the sea to high in the atmosphere, where they can travel for thousands of miles around the Earth.

Billions of viruses get swept up into the atmosphere by dust clouds and water droplets, travel for thousands of miles and then eventually settle back to Earth, according to new research.

This may sound a bit frightening, but almost all of these sky-borne viruses are harmless to humans, says Curtis Suttle, a virologist at the University of British Columbia who co-authored a study based on data collected in Spain. The viruses circulating high up in the atmosphere are infecting almost exclusively other microbes, primarily bacteria.

Above the planetary boundary layer, at elevations of about 9,000 feet, scientists typically find close to a billion viruses every square yard per day that are settling out of the atmosphere, Suttle explains. “Down at the surface — if you're in a city or something like that — you can be sure that there are a lot more viruses settling out of the atmosphere than a billion per square yard per day.”

Viruses are obligate pathogens, meaning they can replicate only by infecting other living organisms. “They're pretty simple by many standards,” Suttle says. “They essentially have a protein coat that surrounds some nucleic acids, and when they find a suitable host organism — and they usually infect only one type of host — they will introduce that nucleic acid into the host and begin to grow.”

While plenty of bad viruses exist that can make people sick, every time we step outside we’re literally inhaling millions of viruses into our bodies, Suttle says. “If you take a swim in the ocean, you would probably ingest somewhere between 30 and a couple of 100 million viruses. Those viruses don't make us sick. In fact, they're just part of the natural ecosystem.”

For the first three-and-a-half billion years that life has existed on Earth, it was entirely microbial, Suttle points out. The only life forms were bacteria, another microbe called archaea and the viruses that infect them. Viruses were the predators in the system. Multicellular life didn't come on the scene until a few hundred million years ago.

"Viruses and the organisms they infect are extremely highly coevolved,” Suttle explains, “and as part of that process, viruses are really, really good at moving genetic information around. In fact, the field of biotechnology originated [with the discovery] that you could use a virus to move genetic information from one organism to another. The original genetic engineering, if you like, was using viruses to actually move genes around among organisms."

A large percentage of human nucleic acids — our DNA — is actually viruses that are “still stuck in our genome,” Suttle points out. The placenta of mammals contains a protein that was donated by viruses; major components of our nervous system are the result of genetic information donated from viruses. “Viruses are masters at moving genetic information around and, as a result of that, they've been absolutely crucial to the evolution of all organisms,” he says.

Viruses may, in fact, be the key to identifying extraterrestrial life forms.

“We’ve done work with NASA and the Canadian Space Agency, and when I have served on these committees I’d say, ‘If we want to look for life on other planets, we should probably be looking for viruses,’” Suttle says. “Because theory tells us that if we have living organisms, we'll always have the kind of parasites and pathogens that viruses replicate on. They are by far the most abundant biological entities on Earth, and presumably elsewhere as well.”