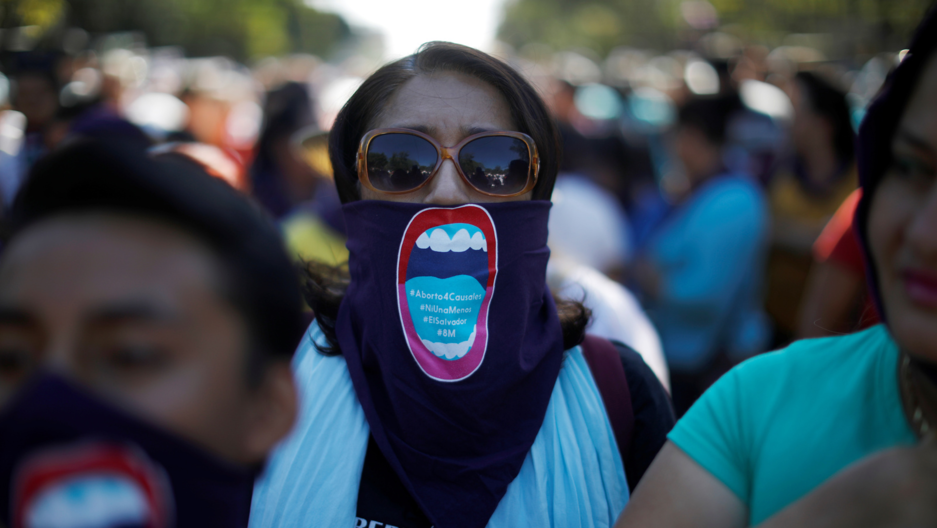 Activists participate in a march to call for an end to violence against women during International Women's Day in San Salvador, El Salvador, March 8, 2018.

For more than four decades, the United Nations has marked March 8 as International Women’s Day. While it’s a global celebration of the social, economic, cultural and political achievements of women around the world, the day is also used to bring attention to the essential challenges affecting women everywhere — especially in poorer countries.

Phumzile Mlambo-Ngcuka is the executive director of the organization UN Women. Her team is using International Women’s Day to launch the #TimeIsNow campaign to highlight the rights and activism of rural women, who make up over a quarter of the world’s population but are lacking resources and support in every measure of development.

“Rural women and girls are one constituency that are at risk of being left behind … unless we take active and targeted approaches to reach out to them,” she says.

The agency also hopes to build alliances between urban and rural women, since many can face similar challenges no matter where they are in the world.

Over the last year, women everywhere have protested sexual harassment and violence with the #MeToo movement in the United States, the #YoTambien campaign in Mexico, Spain and South America, #BalanceTonPorc in France and #AnaKaman in the Middle East. This year, UN Women is hoping to transform the momentous amount of female activism into broader action.

“What the #MeToo movement captures is the high prevalence of harassment and sexual abuse in women by perpetrators who never have to be accountable,” says Mlambo-Ngcuka. “In all cultures, women are never believed or taken seriously when they complain about any form of harassment — in fact, [in many cultures] they do not even have words for it. As a result of this movement, all over the world, institutions, governments are having to actually look at the environment that they provide for women. It is generating a conversation that is relevant for women everywhere.”

On the whole, Mlambo-Ngcuka says that the #MeToo movement is helping to foster a culture change across the world, and the United Nations is taking notice. Next week at the 62nd session of the UN’s Commission on the Status of Women in New York City, UN Women plans to discuss the #MeToo movement with member states and other UN entities.

“Our responsibility as UN Women is to help member states to set standards on these issues,” she says. “This year is [focused on] rural women, but we will bring this issue — we are going to be able to show how what is happening in Hollywood happens in an even more intense and more devastating way in rural areas.”

These two issues have collided in Myanmar. There have been horrific reports of soldiers and paramilitaries using systematic rape as a weapon as they carry out an ethnic cleansing campaign against the Rohingya people. Mlambo-Ngcuka recently returned from a refugee camp housing the Rohingya in Bangladesh and describes a troubling situation.

“The women in that refugee camp are traumatized and the numbers are huge — I have never seen a refugee camp of that size,” she says. “It is truly one of the most devastating experiences that any society and any community could ever go through.”

According to Mlambo-Ngcuka, UN Women is working with the National Human Rights Commission of Bangladesh to document some of the human rights abuses Rohingya women and girls have endured.

“Those who are able to name their perpetrators can provide us that information so we can start documenting and producing a book of some sorts that one day, some way, there may be an opportunity for justice to be served,” she says. “We will do what we can to capture some form of data and information that can be credible enough to be used in a court of law.”

UN Women is going to focus its efforts for the rest of 2018 on the issue of violence against women, which impacts millions of women around the world.

“We’re focusing on trafficking in Asia, we’re focusing on cultural practices that are harmful to women in Africa, such as child marriage and female genital mutilation, we are focusing on domestic violence and sexual violence in Latin America, and equal pay,” says Mlambo-Ngcuka. “In different countries, depending on what is possible for us to do in a particular country, we’ll focus on more than one aspect of women’s empowerment.”

“We are encouraged because a lot of our energy, time, and budget goes into changing these laws, and to supporting the implementation,” she says. “But the slate has not been cleaned completely — we still have over 37 countries where women are still expected to marry their rapists. Our focus as UN Women is to eliminate all of these laws.”