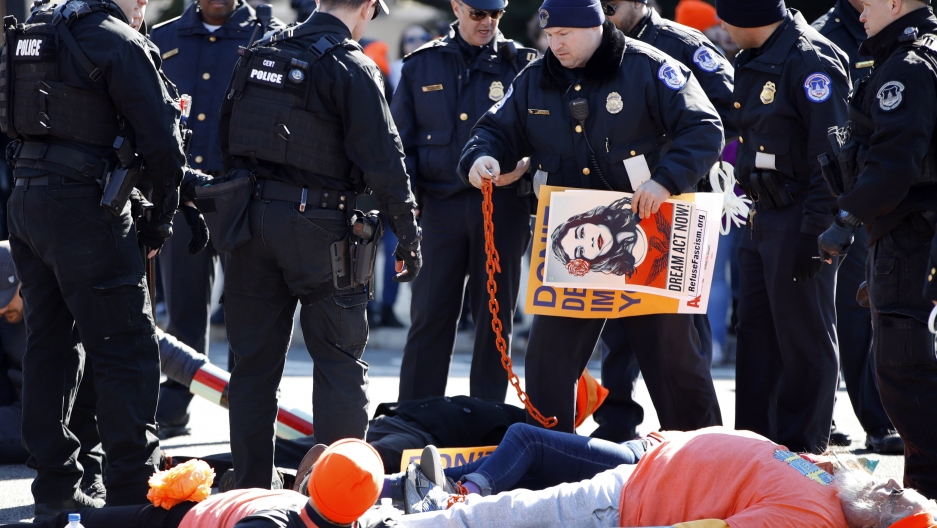 On March 5, police in Washington, DC, break chains locking together supporters of the Deferred Action for Childhood Arrivals program who participated in an act of civil disobedience in support of the Obama-era federal program.

On Tuesday, the arrests on Capitol Hill totaled 116 people, immigrant groups reported. Several dozen people chained themselves together and blocked midday traffic. Police labored to sever the chains in order to arrest the demonstrators. Others were arrested during a sit-in at the offices of Republican Speaker of the House Paul Ryan.

“We believe that we will win!” the demonstrators chanted.

This happened as about 900 young immigrants protested inaction by Congress to pass legislation to give them permanent legal status the United States.

Related: As Trump ends Obama-era protections for Salvadorans, a family in Minnesota has few good options to stay together

To many outsiders, it looked like impulsive moves by largely young people furious at President Donald Trump and frustrated with Congress for failing to once again land on a legislative fix for DACA, or the Deferred Action for Childhood Arrivals. The Obama-era program launched in 2012 temporarily protects from deportation some young immigrants who came to the US as children.

But every detail — the chains, the chants, the paper flowers they used to spell out the word “unafraid” on the Capitol lawn and the orange monarch butterfly wings many wore to symbolize their movement as migrants — were carefully choreographed.

Related: Make your way through the complex maze of seeking asylum in the US

It was a display of the tactical skills of a movement of young immigrants with scant resources but growing numbers. They say they do not plan to let lawmakers forget them.

Instead of signaling defeat, immigrant leaders said they risked arrest to remind Congress they are still active and to mark the start of campaigns in their home states to punish lawmakers who did not support them by mobilizing voters against the politicians in midterm elections in November.

Related: A family of lawyers fought to clear their name. Now their story is in an Oscar-nominated documentary.

To prepare for those demonstrations, the largest youth organization, United We Dream, brought about 400 young immigrants to Washington for four days of strategizing and training.

With no resources to pay for stylish conference rooms, the protestors were migrants in the nation’s capital, riding the subway and moving their training sessions over five days from rooms borrowed from wealthier civil rights groups to cramped hotel rooms and workspaces they scrounged. Hunger threatened because cash they had raised to feed hundreds of people did not arrive on time. They got through on spicy Cheetos and water.

Related: Why a recent Supreme Court decision on bonds is a ‘red flag’ for immigrants in detention

The meetings lasted into the night, with debates centering on strategic details including discussion around what hashtag they should choose for their movement and how they should chain their hands and feet. (In the end, they chained both.) In stormy meetings, the group also discussed the Black Panthers and other militant groups from the past, but declined radical strategies for now in favor of actions in their home states to build support for their cause in the November elections.

In the end, protest day was bittersweet for them. March 5 marked a deadline for Congress set by President Trump, who began phasing out DACA in September. After a three-day shutdown of the federal government in January and a showdown over a spending bill last month, many immigrants thought Congress would be spurred to pass the Dream Act — which would offer them a permanent pathway to citizenship.

Related: As US ends immigration programs, a mother and son wonder if they'll ever be together again

The Senate voted but did not pass a bill and the House of Representatives never held a vote. A Supreme Court decision let stand a federal judge’s ruling that kept parts of the DACA program running, allowing about 700,000 young people who already have DACA permits to renew them, although not authorizing any new applications.

The school shootings in Parkland, Florida drew national attention to another polarizing issue — gun control — sapping the urgency among some lawmakers to act on immigration in an election year on an issue that sharply divides voters.

But DACA recipients who traveled to Washington said the issue remains urgent for them, with ongoing uncertainty for those who have DACA and the palpable threat of deportation under Trump for more than 1 million young people who were not eligible for DACA or did not apply. With chapters in 27 states, last weekend United We Dream brought immigrants from mainly Nebraska, Oklahoma, Washington state and Florida — places where new people have come to the movement since Trump canceled DACA.

One session allowed youths to air their disappointment with Congress’s inaction. “I am heartbroken. I am worried. I am overwhelmed. I am angry,” said Amor Habbab, a Mexican-born immigrant and DACA holder from Omaha, Nebraska, who has been living in the US since 2004. “I can’t believe this debate is still happening in 2018.”

As an antidote to the despondency many felt, group leaders encouraged them to plan a role in the upcoming protest. They were recruits into what the organization calls its "honey badgers" — a corps of activists who are trained to participate in more militant protests, including civil disobedience. They adopted the name from an animal said to be tenacious, that fights back even after a bite from a cobra.

Related: She escaped violence in El Salvador, but there’s little time or resources to heal while seeking asylum in the US

In the group’s lingo, civil disobedience protests and the immigrants who join in them are piñas, the Spanish word for pineapple, a reference to the prickly outside of the fruit.

For Monday’s action, a smaller elite of demonstrators was dubbed “habaneros.” They created the plan to chain themselves together and block a street, a tactic that makes it harder for police to separate them, prolonging the action.

Karla Aguirre, a Mexican immigrant from Charleston, South Carolina, who is the civil disobedience coordinator for the group, gave a pep talk describing her first arrest in December in the Capitol Hill office of Republican Senator Dean Heller of Nevada. “Even though my parents weren’t happy, and they freaked out a little, they realized what their daughter was doing was for them,” Aguirre told the gathering. “And when I was getting those handcuffs, I thought of my mom and my dad and my sister, who are all undocumented.”

Related: You're a young student and your visa is tied to your parents. You're about to age out. What do you do next?

Meanwhile, the group also focused on minimizing the risks some immigrants, including those with DACA, can face by engaging in such protests. Lawyers have advised the group on their rights, and during the weekend training demonstrators learned how to get arrested without resisting. In past protests in Washington, demonstrators have received only citations, so their records show an arrest but no formal charges or convictions.

“It’s a risk we are taking and it could be scary,” said Karina Ruiz, a Mexican-born DACA holder who lives in Phoenix with her three children, all of whom are US citizens. “But risking arrest is the minimum of my fears,” she explained. “My biggest fear is being separated from my children and having my family torn apart.”

Julia Preston is a contributing writer at the Marshall Project.