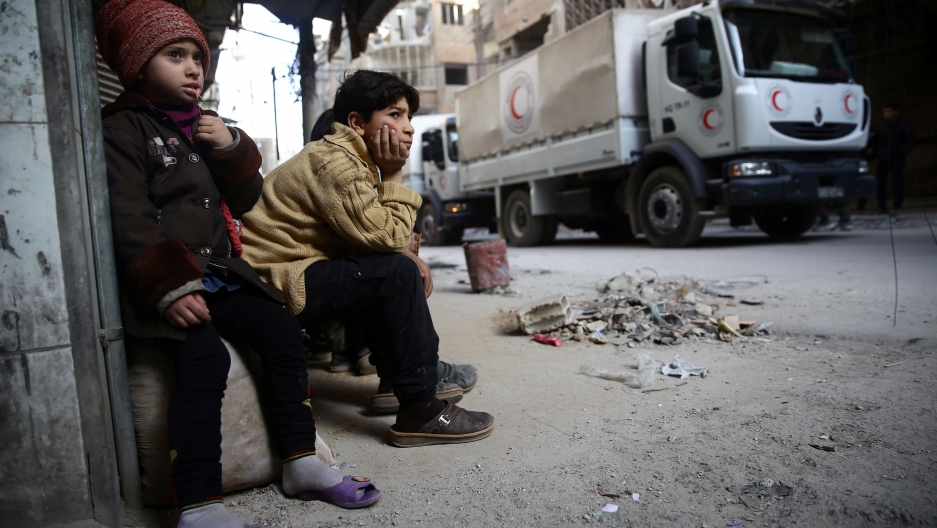 Aid trucks reached Syria's eastern Ghouta region on Monday for the first time since the start of one of the war's deadliest assaults, but the government stripped some medical supplies from the convoy and pressed on with its air and ground assault.

The convoy of more than 40 trucks pulled out of Douma in darkness after shelling on the town, without fully unloading supplies during a nine-hour stay. All staff were safe and heading back to the capital Damascus, aid officials said.

Related: Opposing sides in Syria's punishing civil war ask whether they can ever forgive

The Russian-backed Syrian army has captured more than a third of the eastern Ghouta in recent days, threatening to slice the last major rebel-held area near Damascus in two, despite Western accusations it has violated a ceasefire.

The United Nations says 400,000 people are trapped inside the besieged enclave, and were already running out of food and medical supplies before the assault began with intense air strikes two weeks ago.

"The team is safe, but given the security situation a decision was taken to go back for now. They off-loaded as much as possible given the current situation on the ground," spokeswoman Iolanda Jaquemet of the International Committee of the Red Cross (ICRC) said in Geneva.

Another aid source told Reuters that 10 trucks left the town "fully sealed", while four more had been partially unloaded.

Hours earlier, a senior U.N. official accompanying the convoy said he was "not happy" to hear loud shelling near the crossing point into eastern Ghouta despite an agreement that the aid would be delivered in safety.

"We need to be assured that we will be able to deliver the humanitarian assistance under good conditions," Ali al-Za'tari told Reuters at the crossing point.

A World Health Organization official said the government had ordered 70 percent of medical supplies to be stripped out of the convoy, preventing trauma kits, surgical kits, insulin and other vital material from reaching the area. The International Committee of the Red Cross confirmed some medical equipment had been blocked but gave no details.

Related: A Syrian with Temporary Protected Status says it's a matter of life or death

The Britain-based Syrian Observatory for Human Rights said strikes targeted front lines near the town of Harasta and the villages of Beit Sawa and Hosh al-Ashari. The Observatory said 45 people were killed and 190 injured on Monday.

A military media unit run by the government's ally Hezbollah reported that the Syrian army had taken the village of al-Mohammadiyeh, located on the southeastern corner of the enclave.

Related: Is the US suffering from incoherent policies in the Middle East?

President Bashar al-Assad vowed on Sunday to continue the military push into eastern Ghouta, a densely populated area of farmland and towns just outside Damascus which government forces have encircled since 2013.

Many civilian residents have fled from the frontlines into the town of Douma, a resident said on Sunday.

Assad and his allies regard the rebel groups that hold eastern Ghouta as terrorists, and say a U.N. Security Council resolution demanding a country-wide ceasefire does not apply to operations against them.

A week ago Russia unilaterally announced five-hour daily pauses in the fighting, but clashes have continued during those hours and Western countries dismissed it as inadequate.

The fighting in eastern Ghouta follows a pattern used in other areas recaptured by the government since Russia entered the war on Assad's side in 2015, with sieges, bombardment and ground offensives combined with an offer to let civilians and fighters who surrender escape through "humanitarian corridors."

For the rebels fighting to oust Assad, the loss of eastern Ghouta would mark their heaviest defeat since the battle of Aleppo in late 2016 and end their ability to target the capital. Rebel shelling on Damascus has killed dozens of people during the last two weeks, state-run media has said.

The Observatory said government forces had captured a third of the area in their advance from the east. Syrian state television on Monday said the army had made major advances, seizing 40 percent of the area previously held by the rebels.

Late on Sunday, a rebel official said factions in eastern Ghouta were working together to prepare to retake lost ground.

The Observatory said government forces had captured a third of the area in their advance from the east. Syrian state television on Monday said the army had made major advances, seizing 40 percent of the area previously held by the rebels.

Monday's convoy of more than 40 trucks carrying aid was the first to reach the besieged area since Feb. 14 and only the second since the start of 2018.

Za'tari said the shipment had been scaled back from providing food for 70,000 people to providing for 27,500. The United Nations says Syria has agreed to allow in the rest of the food for the full 70,000 in a second convoy in three days.

"The convoy is not sufficient," Za'tari said. It would take many hours to offload the aid and it might be well after nightfall before it could return, he added.

Marwa Awad, spokeswoman for the World Food Programme, said it had started to deliver supplies from the trucks after meeting local councils, and that the entire convoy would leave together afterwards. The aid included food and nutritional assistance.

The two-week assault has brought footage of children being carried out of rubble and hospitals being bombed to viewers around the world once again. Since the fall of Aleppo more than a year ago, Syrian government forces had focused their efforts mainly on Islamic State-held territory in the more remote east of the country, but they have now renewed their campaign to crush anti-Assad rebels in the heavily-populated west.

Moscow and Damascus deny they are killing large numbers of civilians. In comments broadcast by state television on Sunday, Assad dismissed Western statements about the humanitarian situation in eastern Ghouta as "a ridiculous lie."

At the U.N. Human Rights Council in Geneva, Russian diplomat Alexei Goltyaev said: "The media atmosphere is saturated with lies. ... As a result we see debates and votes that are entirely removed from the actual situation on the ground."

Russia's military said the rebels who control eastern Ghouta had agreed to let civilians leave in return for aid.

Assad and Russia have both repeatedly accused the rebels of stopping civilians fleeing eastern Ghouta to use them as human shields. The insurgents deny this and say people there fear arrest, torture or forcible conscription by the government if they leave.