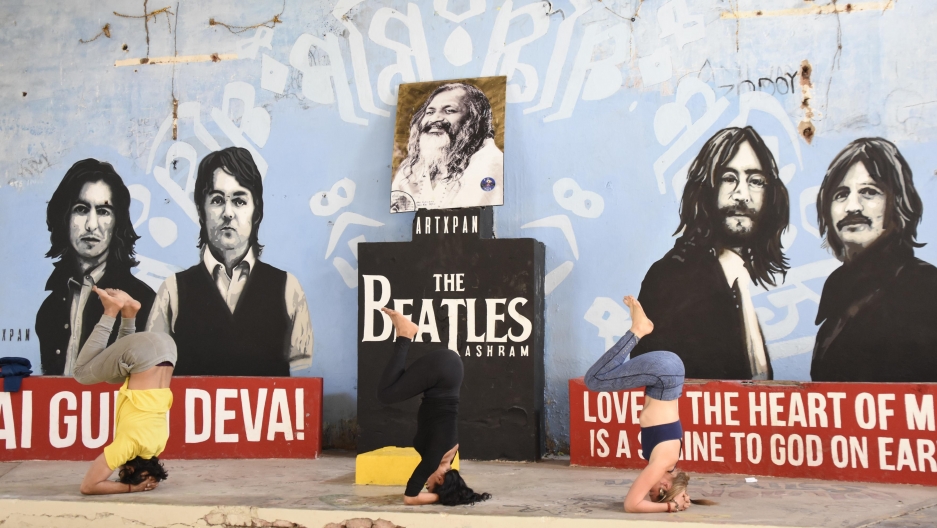 Women practice yoga in front of Beatles-themed displays at the ashram of Maharishi Mahesh Yogi in Rishikesh, northern India, on Feb. 25, 2018. The area, which marks the 50th year of the British rock band's stay, has attracted many fans from around the world.

In February 1968, the Beatles embarked on their famous discovery of India to study transcendental meditation with Maharishi Mahesh Yogi. Now 50 years later India is rediscovering the Beatles — or at least the tourism potential of the world’s most famous rock band seeking salvation in the country.

A yoga festival in Rishikesh is having a Beatles special this month. A tribute band from England, the Fab Four, is supposed to perform there. There are plans for a Beatles Museum and what’s left of the Maharishi Mahesh Yogi’s ashram, a 14-acre compound where the Beatles stayed, has been spruced up for tourists.

Of course, when the Beatles actually came in 1968, the Indian government was far warier.

“There was strong opposition in parliament to Maharishi Mahesh Yogi’s ashram and these international celebrities coming. The Communists felt that they were CIA spies,” says Ajoy Bose, a political journalist who has just written the book “Across the Universe,” which is about the Beatles in India. Maharishi’s meditation compound, known as Chaurasi Kutia, was built using money given to him by the American heiress Doris Duke on land leased by the Uttar Pradesh forest department.

Cultural purists were angry with sitar musician Ravi Shankar as well. They felt that by becoming George Harrison’s guru he had “sold out Indian culture and become a hippie,” says Bose. 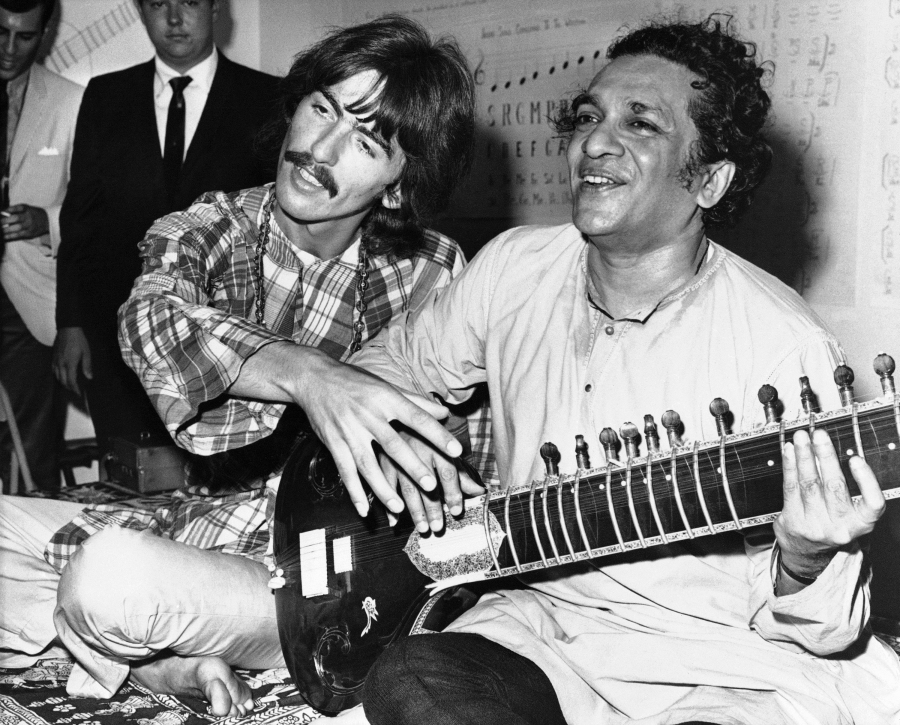 George Harrison of the Beatles sits cross-legged with his musical mentor, Ravi Shankar of India, a sitar virtuoso, in Los Angeles, Aug. 3, 1967, as Harrison explains to newsmen that Shankar is teaching him to play the sitar, a 25-stringed guitar-like instrument. Harrison said “Indian music makes God come through in a spiritual way.”

Bose believes destiny probably brought the Beatles to India. He writes that the Beatles first met Maharishi Mahesh Yogi in London in 1967. The band attended his seminar in Wales but had to leave after the sudden death of their manager and mentor, Brian Epstein, in 1967. The Maharishi came along speaking words of wisdom and soon the Beatles came to find themselves in India.

Some say the India trip marked the beginning of the end of the Beatles. Rock historian Philip Norman, who spoke about the Beatles at the Jaipur Literature Festival this year, says India probably “saved their sanity” and helped them stay together a little longer than they would have otherwise. The group was worn out by year after year of relentless hard work, touring and ego clashes.

“And what they really went to with Maharishi was essentially a spa with not too much discipline,” says Norman. “There was not very much meditation. They could sit around, eat nice vegetarian food. They could drink. Things were smuggled in. Pot was smuggled in.” They also got to spend rare quality time with their wives and girlfriends, long sidelined by their music.

But it wasn’t all a party. Ringo Starr’s stomach could not stand Indian food and its spices. He carried a suitcase full of Heinz baked beans. And his wife Maureen was terrified of flying insects.

“Poor thing, she had a lot of problems,” says Bose. “Rishikesh, being up in the hills, was in a remote area, close to the jungle. There were a lot of insects.” The stars did not last long.

The transcendental meditation did not work out that well either — the Beatles had short attention spans.

The Maharishi showered special attention on his star guests. They had the best bungalows with foam mattresses, as well as special audiences with the Maharishi. He tried to impress the Beatles by taking them on helicopter rides. John Lennon insisted on being the first to go up with the Maharishi. Later Paul McCartney asked him why he’d been so adamant.

“John said, ‘I thought the Maharishi would slip me the real secret mantra which would give me happiness,’” says Bose.

They never found the secret to happiness, but they found something they believed was more precious.

They were just left to themselves to talk to each other, play music and think. As musicians, it was phenomenally productive. Some 30 to 48 songs came out of that brief stay in Rishikesh — many of them ending up on the "White Album," some on "Abbey Road." “Dear Prudence” was about Mia Farrow’s sister Prudence’s obsessive meditation. “Why Don’t We Do It In The Road” was inspired by seeing monkeys having sex on the road. Even Ringo Starr wrote his first song for the Beatles, “Don’t Pass Me By,” in Rishikesh.

But it all came to an abrupt and ugly end within six weeks. Lennon accused the Maharishi of making a pass at Mia Farrow, or some say her sister Prudence. That became the song "Sexy Sadie." Norman says that was “complete rubbish.” Lennon was in love with Yoko Ono and missed her. The story of the pass was just an excuse to leave India.

Only George Harrison persevered and held onto his Hindu spirituality for the rest of his life, even reading from the Bhagavad Gita to his mother on her deathbed.

“What India really did was give George a raison d'etre,” says Norman.

Soon the Maharishi ran into trouble with Indian tax authorities. The ashram was abandoned and reclaimed by the jungle and psychedelic graffiti from Beatles fans from across the world.

When Bose went there he only found the ruins of the Maharishi’s grand bungalow overlooking the river and the remnants of the igloo-like meditation chambers, which were meant to evoke mountain caves.

But the memories remain. He found an old man who owned a music shop in nearby Dehra Dun and had repaired John Lennon’s guitar. At Lennon’s request, he made him a pedal harmonium and his niece had painted it in psychedelic colors.

“That’s somewhere with Yoko Ono now,” says Bose. “This man is now 85. And the last thing he wants to see in his life is this harmonium.”