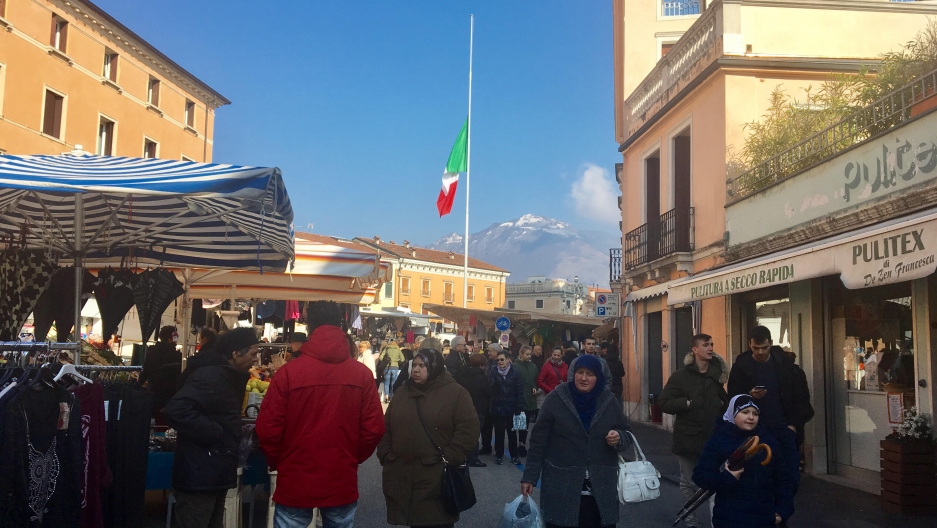 The town of Schio sits in the heart of the Veneto region, which has been a stronghold of Lega Nord or Northern League, a far-right political party. Despite its surroundings, Schio has had a different history, following a tradition of social solidarity that dates back to the 19th century.

Cheng doesn’t take his eyes off the floor as he enters Annalisa Bressan’s house. His cheeks are pink from crying and despite Bressan’s insistence, the boy doesn’t say a word about what happened. His sister, Cheng Jun, does the explaining. Turns out, the kids’ father didn’t like Cheng’s grade in Italian class and took away his cellphone.

“But you had a beautiful grade! I will talk to your father and explain. Don’t worry,” Bressan says, laughing.

Suddenly at peace, the boy sits down at Bressan’s kitchen table, ready to do some homework.

Annalisa Bressan is an Italian teacher in Schio, a small town in Northeast Italy. She has been tutoring the children of migrants in her free time after the school day. She’s also the president of the nonprofit Mondo nella Città, which was one of the first projects to integrate the SPRAR — Protection System for Asylum Seekers and Refugees — a government-funded initiative created in 2002 to help asylum seekers settle in Italy.

When refugees from the Yugoslavia started arriving in Italy in the early '90s, Bressan and some friends decided to help by finding a house for a family from Kosovo.

“Me and my friends who started this organization have always been against wars and we wanted to do something other than protesting. Welcoming that first family was our way of doing something back then,” Bressan says.

That experience was the start of an integration project — and anattitude toward welcoming newcomers — that has allowed immigrants to feel at home in Schio for over two decades.

The town sits in the heart of the Veneto region, which has been a stronghold of Lega Nord or Northern League, a far-right political party that at times advocated for the secession of the North.

Despite its surroundings, Schio has had a different history, following a tradition of social solidarity that dates back to the 19th century, when the Italian industrialist Alessandro Rossi built schools, nurseries, and housing for his factory workers here. Bressan says that legacy of solidarity is deeply ingrained in the hearts and minds of the people in Schio, which helps the integration of foreigners.

Schio was also the place where the well-known Sudanese nun, Josephine Bakhita, lived and died. With a history of being kidnapped and trafficked, Bakhita was promoted as a patron saint for the victims of slavery and human trafficking. The people of Scshio refer to her as “our Black Mother.”

Previously, immigration wasn't on the list of local politicians' priorities. However, the shooting of six African migrants in the town of Macerata in early February turned the debate over migrants into the central topic ahead of the Italian vote on March 4.

And in following the region's shift to the right, Schio elected Valter Orsi a former-militant with the Northern League, as their mayor. He says he wants to crack down on immigration and refuses to condemn the suspect in the shooting in Macerata.

“The exasperated act of that person happened after a series of events. If we don’t control migration we can’t control the increase in criminality,” Orsi says. According to the Interior Ministry, however, crime rates have dropped by 17 percent in the last two years.

Bressan rejects the idea that immigration in Schio is out of control.

“Schio is a good experience in terms of integration because immigration happened smoothly. We never had bad experiences. We never had ghettos for non-Italians either and we never had problems that happen when people are separated,” she says.

At her kitchen table one of her students from Morocco, Mohamad, studies the Pythagorean theorem and tells the story of  Rosina — the woman who helped his family and took them in when they first arrived in Schio.

“Rosina didn’t have a family and we became her family,” Mohamed says.

Bressan explains that the story of Mohamed is not a rare one in their town.

“This sort of informal integration cannot be tracked by numbers or studies, but it creates the spirit of a place and that’s what has made the welcoming here so positive,” she says. "I’m not connected to political parties and my way of being political is by contributing with what I can. In my case, I teach and I can help these kids who need help outside of school."

The right alliance that includes Berlusconi’s Forza Italia and Northern League has the support of 38 percent of the voting population. But Bressan has faith the outcome of the elections won’t change the hearts and minds of people in Schio.

“What drives the relationships is something other than a political movement. What drives a society forward are the ideas in people’s minds. The minds of the people in Schio are focused on solidarity and neighborhood,” she says.