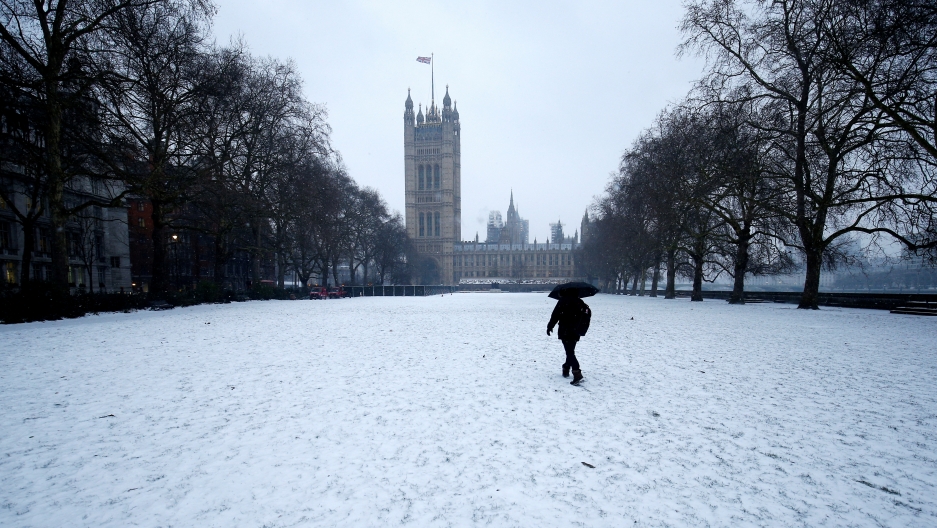 A man walks in the snow next to the Houses of Parliament in London on March 1. Brtain and much of the rest of Europe have been hit with a late winter blast linked to extreme warming in the Arctic.

Daffodils in the park, covered in snow. A snowball fight on the roof of BBC headquarters. Such were the scenes this week in London — echoed across much of Europe — as a blast of cold and snow dubbed “the beast from the east” dragged the continent back into deep winter just as spring was beginning to emerge.

The surprise weather system drew frigid air west from Siberia while channeling storms up over the North Atlantic toward Europe, according to Ruth Mottram, a climate scientist at the Danish Meteorological Institute in Copenhagen. The combination brought snow to Nice on the French Riviera and frigid temperatures that led to several deaths in northern Europe.

The cold blast caught Hornak off-guard, he says. “It did the whole continent, really. ... When you look at British social media, my Facebook feed, everything is about the weather right now."

“It’s like Armageddon,” said one pedestrian in central London. “It’s interesting. Who knows what will happen.”

“It’s the wind what gets you,” said another. The same man felt climate change might be involved in the weather weirdness. “It seems too convenient not to be meshed together in some fashion."

Climate change is definitely influencing weather patterns, but Mottram says things aren’t quite as out of whack in Europe this week as they may seem.

“To an extent, the cold is not that unusual if you look on a long term,” she says. “It’s just that the last few years we’ve had quite some mild winters, and we’ve sort of forgotten a bit how cold winter can get.”

And the particular weather phenomenon behind the winter blast — a split in the Arctic winter circulation system known as the polar vortex — happens “reasonably frequently,” Mottram says. “It’s not an uncommon weather pattern.”

What is uncommon, though, is what’s going on in the Arctic, and how that may be helping set up Europe’s cold blast.

Related: Could the polar vortex have something to do with global warming?

“As this polar vortex has split in two, it’s allowed lots of warm air to move up from the Atlantic” and cause a winter warm spell over the Arctic that hasn’t been seen since records were first kept starting in the 1950s, Mottram says.

Researchers say it was the warmest February on record in the Arctic, including 10 days of temperatures above freezing at the height of the sunless Arctic winter. 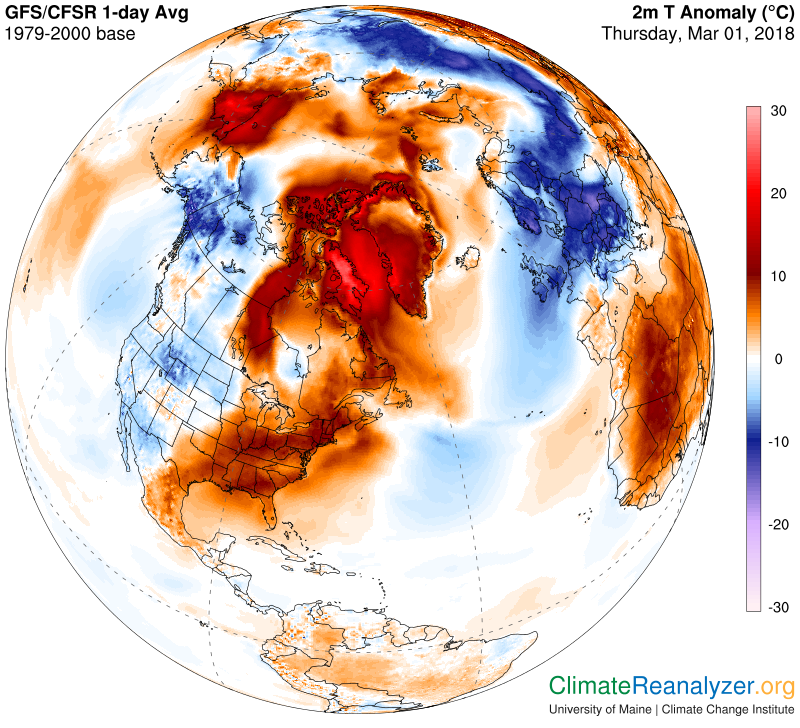 This map from the University of Maine's Climate Reanalyzer project shows the temperature divergence from the 1979-2000 average in the Arctic and most of Europe on March 1. Red areas are warmer than average, blue areas are cooler.

“That means that we’ve actually got open water at the top of Greenland right now, which is incredibly unusual,” Mottram says.

“There’s also at the same time been warm air coming through the Bering Strait. So the Arctic has really been kind of attacked on both sides,” Mottram says. “And then having this change in the circulation pattern has allowed cold air to come over Europe. ... They’re definitely two sides of the same coin.”

As for the precise role of climate change in all of this, Mottram says that’s difficult to tease out.

“There’s a lot of [natural] variability in the Arctic,” she says. “It’s probably one of the most natural[ly] variable places on the planet. So in that sense, it’s very hard to draw conclusions.”

On the other hand, she says, these individual weather events are “superimposed on top of a warming climate,” which affects all weather patterns. And the Arctic is warming roughly twice as fast as the rest of the planet.

“The last five or six years we’ve really seen quite warm winters in the Arctic,” Mottram says, “so the baseline [for weather events] is much higher than it was.”

That increases the likelihood that what happens in the Arctic will affect — maybe already is affecting — the weather in the lower latitudes of places like Europe and North America. But as for the specifics of that relationship, Mottram says it’s “really still an area of research.”

What is certain is that parts of Europe are not done with this wild late winter weather, supercharged with cold air displaced from the north. Late in the week, parts of the British Isles, France, Switzerland and Italy were blasted with fresh cold and snow, disrupting travel, schools and even stock trading. 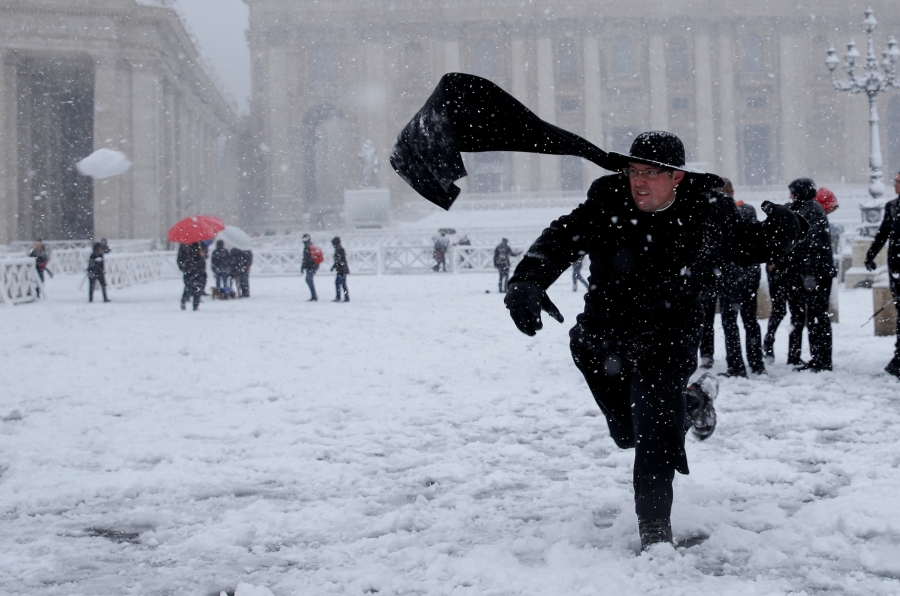 A priest plays with snow during a heavy snowfall in Saint Peter's Square at the Vatican on February 26.

Related: How the warming Arctic might be behind Boston's deep freeze

Related: How is the world getting both a) warmer and b) snowier in some places? Here's how.